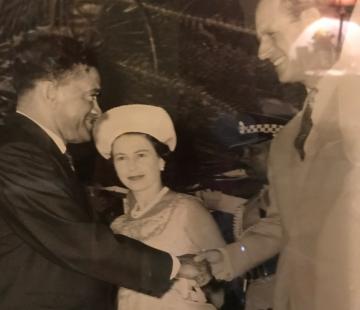 Black History Month is an opportunity to reflect on how individuals have made contributions to our collective evolution. The 1960’s marks one of the most tumultuous years in United States and Caribbean history. This decade saw the civil rights movement, ‘Black power’, anti-war sentiments, and the growing political opposition groups, globally, to apartheid. Here, I highlight one individual who has made contributions towards a just, equal, decolonized, inclusive, world - and the learning we might take forward from such efforts particularly significant for our turbulent times today, and every day.

Maxwell Silvester Carey, M.P., Planter and Politician, Member of House of Representatives, People’s National Party (PNP), of South East Westmoreland, Jamaica, beginning 1955, board member of the All Island Banana Growers Association (AIBGA), member of the Jamaica Agricultural Society (JAS), and my grandfather, is one individual who exemplified leadership during this turbulent time, in small, often unknown, yet not insignificant ways.

On October 5, 1961, Britain announced Jamaica’s Independence in 1962. The new Parliament was to be officially opened by Her Royal Highness the Princess Margaret, and preparations were underway - my mother tells of how my grandmother, among many, practiced their curtsies, over and over, to get this transition’s protocols right for finalizing what was called “constitutional decolonisation”, after nearly 300 years under British rule.

However, two months prior to Independence, in June of 1962, the latest design of a Jamaican flag was put forward in the House with three colours: black, green, and gold.  The black became an issue of contention. The first person to stand up to the contention with including the black in the flag was my grandfather, M.P. Maxwell Carey, who declared: “This country is made up of a majority of black people…I do not see how you can take the black out of the flag” (Neita, 2021). The colour was seen as related to some militant protests related to ‘Black power’. The debate erupted, and in the end members of the House approved to keep the black in the flag.

On Independence Day, Queen Elizabeth emphasized in her speech the importance of collaborative relationships moving forward. And on that day, key questions put forward included the budget and to what degree the rich would be taxed. The budget, given a name each year as a practice, became a highly contested issue. Finally, with the budget put before the 1967 elections, my grandfather launched a scathing attack on the estimates and with the contention of non-transparency of several matters, and soon the practice of naming the budget was phased out in the 1970s “as finance ministers became wary of being trapped by hard-to-forget monikers” (Neita, 2014).

Born into a farming family in Mount Horeb, St. James, Jamaica, my grandfather was especially sensitive to rights and marginalization of the poor and farmers. It was not uncommon for my grandparents to serve what he would call “poor man’s food”, to politicians over for dinner to make a point for connecting to the people as one through food.

Anti-colonial activism was closely watched. In October of 1968, the prime minister, Hugh Shearer, banned the controversial university lecturer Dr. Walter Rodney from returning to his teaching position at the University of the West Indies. Dr. Rodney’s deportation and as a part of the growing Black consciousness became the “Rodney Riots” began, where hundreds of the university students, together with the poor and working classes took to the streets in protest. Politically siding with the protesters’ vision for decolonization and the ban, while parliament was in session my grandfather removed the Mace, the symbol of the monarch’s authority over the proceedings. While the Mace is removed, it is protocol that parliament cannot continue. 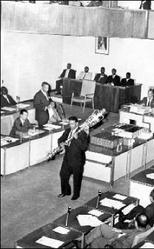 In 1969, Max Carey vigorously supported populist Michael Manley in the party elections because he saw him as a defender of the marginalized and at that time with growing corruption and political violence. In previous years, he had brought forward questions around transparency of the voter list. My grandfather organized the transit company he and my grandmother owned to collect voters from Hanover, St. Ann, and Trelawny, who would otherwise be unable to travel, to take part in the political event. He also had a few of the buses collect food from farms to feed voters. It is said that this effort was critical.

Max Carey’s legacy is not only relevant for his grandchildren and great-grandchildren, not only for Jamaicans, and not only for black people. In our turbulent times, there are and will be opportunities where we are challenged to stand up, raise our individual and collective voices, defend equality and justice, and do what we can for reconciliation efforts, globally, regardless of identity. May we take learnings of such heart, voice, and will, of those before us, forward.