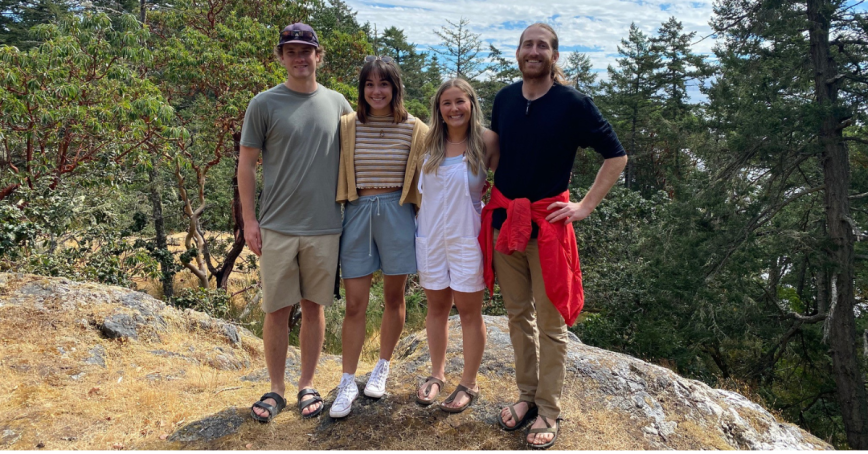 It will be a map and a story, a web page and a database. It will be a collection of knowledge, a record of flora and fauna.

It is the final project of four students in Royal Roads University’s School of Environment and Sustainability.

The four undergrads — Jake Edwards, Caleb Gaeke, Hayley Houlden and Shannon Tallon — have launched a publicly accessible, interactive biodiversity map of the Royal Roads campus and surrounding lands covering the diversity of species and ecosystems found on the site.

Houlden explains that the idea came from one of their professors, Dr. Ann Dale, who’d asked for something accessible and beautiful.

“She really wanted the public to be aware of what’s here on campus and to understand and educate themselves so they care more about the campus,” says Tallon. “When you care more, you’re going to want to protect it.”

Says Edwards: “Even though it’s fairly small and restricted by its boundaries, it’s still a thriving environment.”

Indeed, the lush, green campus is such a thriving environment that it presented the students with their first major hurdle.

“There’s so much going on at the campus, it was really challenging to wrap our heads around it initially,” says Gaeke.

“We narrowed down our scope,” Houlden adds. “Instead of doing however many ecosystems — eight or something — we had to narrow it down to three to make it more realistic.”

One is the Garry oak ecosystem, which boasts more than a dozen plant species, including miner’s lettuce, redwood sorrel and rosy owl-clover, as well as birds such as the barn swallow, evening grosbeak and olive-sided flycatcher.

The four — all of whom came from two-year environmental programs at other institutions, attracted by the ability to jump directly into the third year of a degree at RRU — used a drone to survey the site and employed a high-tech AudioMoth device, provided by Victoria’s Rocky Point Bird Observatory, to log bird and bat calls. They accessed online species information from iNaturalist and eBird. They even got a helping hand from campus security staff to listen for evidence of animal activity.

“It was really nice to see how the community came together to help with this project,” Edwards says.

For all the help they received, however, Dale gives credit for the success of the project directly to the students.

“They are so wonderfully competent and brilliant, and they’re a joy to work with,” she says. “They are so passionate… They want to get on with it, they want solutions, they’re action-oriented.”

And she echoes Tallon’s comments, saying the research’s purpose is “to educate our community and the outside community, and to increase literacy,” adding, “If you don’t know it, you won’t love it and you won’t save it.”

Dale says a bonus product of the students’ research is that they’ve created a framework that conservation groups can use to map biodiversity in their own areas. She has already been in touch with organizations across Canada and is hopeful the RRU model will prove an invaluable tool.

Gaeke’s has hopes too: “What I’d really like to see is that the public uses it and it becomes a useful tool for people to develop a personal relationship with the space.”

While Dale lauds the students’ initiative — and says she believes RRU could be the first university in the country to publish information on its campus biodiversity — she also praises them for reaching out to various university staff and departments to ensure their map would be informative and accessible.

Edwards, Gaeke, Houlden and Tallon say they couldn’t have done the project without their sponsor Dale, or others from inside and outside RRU whose names they shared in a list of acknowledgements: