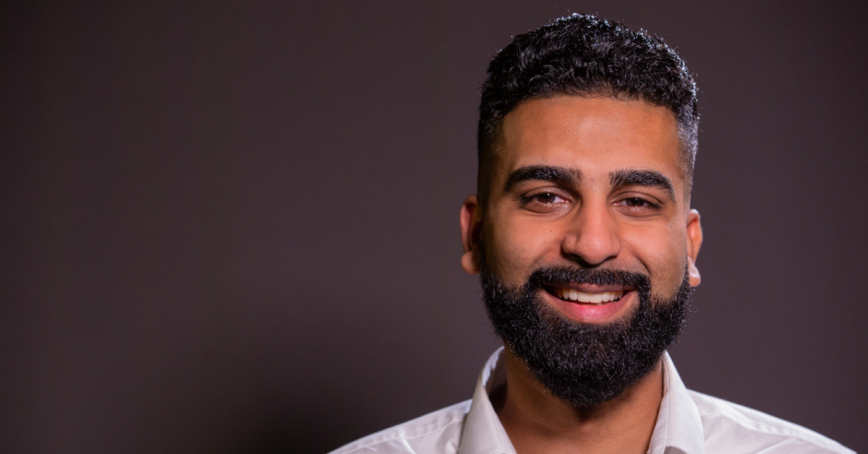 Manak, who was born and raised in Victoria, began his job as manager, strategy and support in the Ministry of Citizens’ Services in September 2019, just months before the start of the COVID-19 pandemic and the subsequent global supply chain crunch. Rather than become discouraged that his new role had dropped him into a maelstrom, he volunteered to work with the province’s supply chain unit and subsequently led the design and launch of two web-based ordering systems: the COVID-19 supply hub and the personal protective equipment (PPE) portal for health care workers.

And as if that wasn’t enough, he started the Royal Roads Master of Business Administration in Executive Management program in January 2021; he’s aiming to graduate in August 2022.

For his leadership as director of modernization and innovation for citizens’ services, he was recently recognized as a finalist in the category of Emerging Leader in the Premier’s Innovation and Excellence Awards.

“I wasn’t expecting it at all, to be nominated for an award at this level,” says Manak, who also earned Bachelor of Arts in Political Science and Business as well as a post-degree diploma in human resource management and leadership. “For me, I just wanted to put up my hand and volunteer… I thought it would be a once-in-a-lifetime opportunity to step in and do meaningful work.”

“It was quite the experience. And you had to act fast on these procurement decisions. It was an extraordinary time to be part of that type of environment.”

An additional challenge was setting up the supply hub and health portal: He and his colleagues were starting from scratch, figuring out how best to 1) find supplies, 2) warehouse them and 3) package and send them out on demand — something that’s standard for businesses like Amazon and other online retailers, but new for government.

Manak says he’s proud of the work his team did, noting it exemplifies the public service.

“It’s the outcomes of what you see from these two initiatives: We were able to address a need and make an impact, and I think that’s what it means to be in the public service,” he says, adding, “Making a positive impact to society around me and to the province is what attracts me to the public service, and I’m really lucky to have been doing that for the past two years.”

He would like to stay in the public service and says his pandemic experience has allowed him to “dive into” the worlds of the supply chain and technology, and, paired with his MBA studies, has expanded his toolkit for wherever his future takes him.

Indeed, Manak says his time — online — with his Royal Roads cohort has helped him, as fellow students come from the public and private sectors, from businesses large and small, and with a variety of experience. And right now, his RRU work is especially timely: He and his classmates are studying risk management.

Watch Karandeep Manak speak about the work that caught the attention of the Premier’s Innovation and Excellence Award committee.

Find out what Karadeep Manak’s experience has been like in the Royal Roads’ MBA program (starts at 29:20).