A Visit to the RRU Library 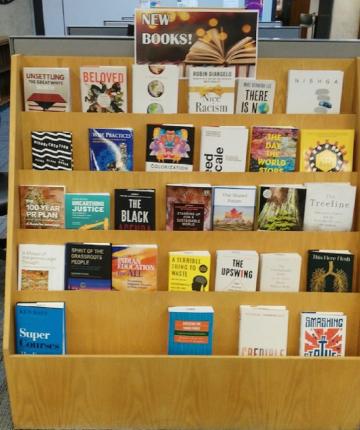 A visit to the RRU Library always has me looking at the New Books section. Thirty books were on the shelves when I was there on 22 March; about a third of them dealt with environmental and sustainability issues and many of them had a strong whiff of “the end of the world is nigh”.

There is No Planet B: A Handbook for the Make or Break Years, by Mike Berners-Lee. “Feeding the world, climate change, biodiversity, antibiotics, plastics – the list of concerns seems endless. But what is most pressing, what are the knock-on effects of our actions, and what should we do first? Do we all need to become vegetarian? How can we fly in a low-carbon world? Should we frack? How can we take control of technology? Does it all come down to population?  And, given the global nature of the challenges we now face, what on Earth can any of us do?...”

Beloved Beasts: Fighting for Life in an Age of Extinction, by Michelle Nijhuis. “Beloved Beasts turns an exacting eye on the history of conservationism, emphasizing the movement's interconnectedness and complexity. Nijhuis takes the reader on a journey through time, from the plains bisons’ brush with extinction in the 1800s, to the community conservancies preserving wildlife in modern-day Namibia. She tells the origin stories of well-known figures and organizations like Aldo Leopold and the National Audubon Society, while also highlighting the roles of lesser-known individuals like Rosalie Edge. She also exposes the often sexist, racist, and colonialist attitudes of conservationists, and how those attitudes have held the movement back...”

The Day the World Stops Shopping: How Ending Consumerism Saves the Environment and Ourselves, by J.B. MacKinnon. “The economy says we must always consume more: even the slightest drop in spending leads to widespread unemployment, bankruptcy, and home foreclosure... The planet says we consume too much: in America, we burn the earth’s resources at a rate five times faster than it can regenerate. And despite efforts to “green” our consumption—by recycling, increasing energy efficiency, or using solar power—we have yet to see a decline in global carbon emissions... Addressing this paradox head-on, J.B. MacKinnon asks, What would really happen if we simply stopped shopping?”

The Uninhabitable Earth: A Story of the Future, by David Wallace-Wells. “It is worse, much worse, than you think. If your anxiety about global warming is dominated by fears of sea-level rise, you are barely scratching the surface of what terrors are possible—food shortages, refugee emergencies, climate wars and economic devastation... The Uninhabitable Earth is both a travelogue of the near future and a meditation on how that future will look to those living through it—the ways that warming promises to transform global politics, the meaning of technology and nature in the modern world, the sustainability of capitalism and the trajectory of human progress.”

The Treeline: The Last Forest and the Future of Life on Earth, by Ben Rawlence. “In his lyrical and passionate book, Rawlence puts on his walking boots, thermal vest and two pairs of gloves to go in search of the frozen north’s most environmentally and culturally significant trees... In addition to pine in Scotland, he encounters birch in Scandinavia, larch in Siberia, spruce in Alaska, poplar in Canada and rowan in Greenland...In each case he discovers that the trees are the starting point and presiding guardian of a teeming ‘mosaic of species’, encompassing everything from microbes to ravens to arctic foxes...”

The New Climate War: The Fight to Take Back our Planet, by Michael Mann. “A renowned climate scientist shows how fossil fuel companies have waged a thirty-year campaign to deflect blame and responsibility and delay action on climate change, and offers a battle plan for how we can save the planet... Recycle. Fly less. Eat less meat. These are some of the ways that we've been told can slow climate change. But the inordinate emphasis on individual behavior is the result of a marketing campaign that has succeeded in placing the responsibility for fixing climate change squarely on the shoulders of individuals... Fossil fuel companies have followed the example of other industries deflecting blame...The result has been disastrous for our planet.”

Standing Up for a Sustainable World: Voices of Change, edited by Claude Henry Johan Rockstrom and Nicholas Stern. “The world has witnessed extraordinary economic growth, poverty reduction and increased life expectancy and population since the end of WWII, but it has occurred at the expense of undermining life support systems on Earth and subjecting future generations to the real risk of destabilising the planet. This timely book exposes and explores this colossal environmental cost and the dangerous position the world is now in. Standing up for a Sustainable World is written by and about key individuals who have not only understood the threats to our planet, but also become witness to them and confronted them.”

Finding the Mother Tree by Suzanne Simard. “In her first book, Simard brings us into her world, the intimate world of the trees, in which she brilliantly illuminates the fascinating and vital truths – that trees are not simply the source of timber or pulp, but are a complex, interdependent circle of life; that forests are social, cooperative creatures connected through underground networks by which trees communicate their vitality and vulnerabilities with communal lives not that different from our own... Simard writes – in inspiring, illuminating, and accessible ways – how trees, living side by side for hundreds of years, have evolved, how they perceive one another, learn and adapt their behaviors, recognize neighbors, and remember the past.”

Speed & Scale: An Action Plan for Solving our Climate Crisis Now, by John Doerr. Early in 1942, President Franklin D. Roosevelt shared with his commanding general a strategy to win World War II. FDR grabbed a pencil and a cocktail napkin and scrawled out a three-point action plan: hold four key territories, attack Japan, and defeat the Nazis in occupied France... Inspired by FDR, the Speed & Scale Plan is built around just six solutions. They define what the world must do by 2050 to contain global warming. We’ve got to get to net zero... We need to electrify transportation, decarbonize the grid, fix our food system, protect our forests and oceans, clean up high-emissions industries (especially steel and cement), and then remove any carbon that’s left over.”

My thanks to Rosie Croft and her wonderful library team for pulling these important and sobering books together. And yet, it saddens me deeply that things have come to this point.