Racism and Prejudice is the Pandemic: Strategies and Resources for Allyship 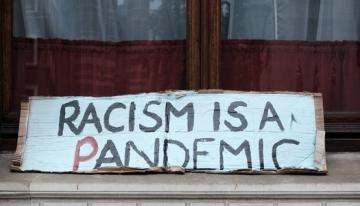 Strong, courageous, passionate, and yet both tired and hopeful voices have lead initiatives, conversations and webinars at Royal Roads University on racism and unconscious bias. These are also echoing the shock and continued outrage as shown with the tragedy of George Floyd. Of course, these calls to action have been ongoing with the many tragedies and prejudice experienced in black communities, Indigenous communities, Jewish communities, Hispanic communities, LGBTQ2S communities, Muslim communities, and Asian communities, to name a few. I am heartened by the University’s leadership lending voice and opportunity to back ending racism, and research on racism and all forms of discrimination previous to these times.

Where Are We Actually Today?

I once personally witnessed staff at another university walk right up in front of a group praying in a corner of a hall and particularly one of the staff continued to yell in the faces of the peacefully and reverently praying to stop over the course of the five minutes it took for the group to pray. As a committee to address discrimination, we eventually got a designated prayer space for students. But the response I often hear to such events is, “all this takes time”. Of course, we have to look at change along a trajectory. Fundamentally, I don’t disagree. But we are not where we are today without a tremendous amount of loss, struggle, and intentional acts of refusal. And, hang on, where are we actually today, really?

As a product of a marriage between a Jamaican - of black, Moroccan Jewish, and white decent - and a German, and now being a mother of two half Arab children, although I am not always identified with any of these groups, the prejudice I experience is perhaps more so the being subjected to constant conscious and unconscious statements and acts of bias. In these, I have to ask myself if it was truly intentional or the true colors of the person are just flying because I am assumed to not have these identities. Sometimes I tap into a collective anger, both inadvertently and intentionally. We have to be clear that we are not speaking merely of unconscious bias. Marginalization, racialization and disempowerment have also been intentional and continue to be, but often in different forms.

I believe it is critical, however, to be intentional about how we channel frustration and anger to bias and prejudice. We also have a responsibility to educate ourselves. We, further, have the responsibility to do our part to create a better, safer and just world. This is an invitation to think about where we are actually today in way of creating that world. This is an invitation to use personal interactions, committees, the classroom, research, our academic voice and importantly highlight other voices, including those in the farthest reaches from academia. Often I meet prejudice with silence, which I often regret, because the strong, courageous, passionate voice is a principle. This is simultaneously a reminder and resolve for myself. Bias and prejudice is constant. It’s everywhere. It’s part of upbringing, innocent jokes, our media, it’s structured in education, it’s part of our systems. So, if this is where we are today, we are going to have to do so much more!

Allyship is listening, and lending voice at the individual and collective levels to address systemic racism and prejudice. This is in view that it will take real intentional acts of refusal and generative collective action to eradicate prejudice. It is listening, and lending voice and action in the classroom, in changing policies, and it’s integrative of the multiple levels to change. It is not with a view of “things take time” but one in which we recognize that we have to accelerate these changes because it is the right thing to do, and we can. I have been in intensive conversations with colleagues in and outside the university and collected materials and resources in way of creating pathways and conversations towards a more positive and inclusive world. Below I list these resources for the practice of deeper acts of refusal and generative work, individually and collectively, for us to consider. I list the sources at the end.

Some resources for further learning and information: