Who is Presenting Whose Natural History? 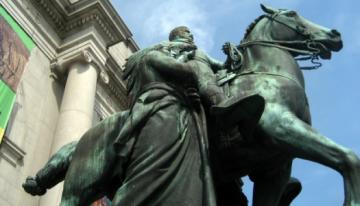 Last December, I visited New York City as a tourist. My visit to the American Museum of Natural History wasn’t pleasant but still exciting for two reasons: (1) I bought those ideas before the museum presents to me, and (2) I dislike those ideas because Donna Haraway convinced me.

I usually over-prepare for my trips. This one was not an exception. I went beyond normal search on information related to NYC. For a moment, I was curious if there was an academic research paper addressed on some tourist attractions there. So, I searched at RRU eLibrary and found Donna’s 47-page article, titled “Teddy Bear Patriarchy: Taxidermy in the Garden of Eden, New York City, 1908 – 1936”. It was published in Social Text by Duke University Press and digitalized with a stable URL. Royal Roads University faculty and students can have full text access via RRU eLibrary.

For those readers who may not have full access, Donna is a prominent scholar in the field of science and technology from a feminist perspective. She authored many books and essays questioning the masculine bias and "WASP" (White Anglo-Saxon Protestant) worldview in scientific culture. “Teddy Bear Patriarchy” was one of them. In that article, Donna pointed out masculine WASPs authored a natural history that could hardly be anywhere close to the reality.

Donna warned us that the impact of presenting such a biased “natural history” to wave after wave of younger generations of New Yorkers and visitors from the world should not be underestimated. My eyes opened and my curiosity increased after reading Donna’s “Teddy Bear Patriarchy”. I put the American Museum of Natural History back to my “must-see-in-NYC” list just for Donna’s viewpoints verification. I had low interest to visit the Museum when I was creating my “must-see-list” because I thought I have already known everything about “natural history”: you will be shocked by the humongous sizes of dinosaurs at the front entrance; you will be awed by comprehensive collections of beetles, butterflies, fish, mammals, and many other things you have no idea that cohabits with you on this earth; you will be keen on learning more about rocks, volcanos, oceans, galaxy, universe, and E=MC2; you will be debating on evolution versus creation; you will be a one-day natural scientist in your life or devote your life to natural science after that visit.

Donna pointed out another way to visit a familiar setting: to look at the statue of Roosevelt at the front entrance; to look at the way of presentation; to look of the four themes the Museum promotes; and to look at the visitors. Then the whole new world unveiled in front of me. Staying in the superbly long queue to enter the Museum became no longer boring because I had a lot to see. Families with kids were the majority. Tourists were the majority. Almost all possible ethnicities and languages one can imagine were there. The rain poured down. The wind made you feel colder. Street food wagons appeared more tempting than usual because you had nothing to do but to fight against the cold of NYC in December. Police and security also reminded you this is NYC, still healing from the scar 9/11 left. I had to empty a bottle of Coke at the doorstep because only water is not suspicious inside a museum presenting about natural history. Anyway, Coke is obviously not natural and should not belong to the Museum of Natural History.

I would not miss the statue of Roosevelt when I was waiting to enter the Museum because Donna reminded me to look at those were standing beside the U.S. President, who was also one of the founders of this Museum. An Aboriginal American and an African, “dressed as ‘savages’” as Donna described, stood next to Mr. Roosevelt, who was on a horse much taller than both standing persons. The horse enhanced the power, authority, and control of Mr. Roosevelt over his companions. I would miss this presentation if I didn’t read Donna’s article. But now I view this status as a preface of a book authored by Mr. Roosevelt and his fellows presenting the natural history in their eyes and minds. It is about man, courage, conquer, and control. It is not about respect, appreciation, cohabitation, and collaboration.

The dinosaurs appeared less horrifying because we get used to them in Hollywood movies and often pet them in Toys R Us. They were monsters. But, fortunately, they were dead. Dead monsters can be cute because we can set them up whichever way we like. A demonstration of two dinosaurs in the lobby of the Museum of Natural History expressed the same message: Mr. Roosevelt and his fellows are the controllers of this world, not them. In fact, nobody knows if these two dinosaurs met each other before. But they are permanently threatening each other and let people take photos in front of them. Conflicts were between "stupid" animals. And we are controlling them. The authors messaged us at the first minute, even before we purchased our tickets.

It is a free message just in case you would have given up the idea to visit the Museum. It is a message that may not free you from thinking in other ways because each hall behind of the main entrance after lobby are repeating the same message, Donna warned me. Donna is right. If I didn’t read her article, I might view the presentations in each hall repetition of knowledge I knew from childhood. But today I was tracing each line of prisoning freedom of thinking in each exhibition hall. My discovery didn’t stop there because I was also scanning how intercultural the exhibitions were. And my findings were sad because Mr. Roosevelt and his fellows seemed to have less interest or wisdom regarding intercultural understanding.

Peoples and cultures from Africa, Asia, Oceania, and America were included in the “natural history”. In contrast, Europeans and European colonists in North and South America were not regarded as part of the “natural history”. I could not get rid of the image of Mr. Roosevelt on the horse with two natives serving him to declare “imperialist, capitalist, and white culture” as Donna put. I roamed for hours in the Museum, pondering how interculturally-blind it is, and whether it is possible to reorganize the exhibition in a way that all cultures are respected, and all viewpoints celebrated. I couldn’t find quick answers because the ideas and themes highlighted in the Museum were universal across cultures on one hand but can be easily twisted and biased by any culture on the other hand.

Donna summarized them well, “Inscribed across the top are the words TRUTH, KNOWLEDGE, VISION and the dedication to Roosevelt as ‘a great leader of the youth of America, in energy and fortitude in the faith of nature and of the best in life and in man.’ Youth, paternal solicitude, virile defence of democracy, and intense emotional connection to nature are the unmistaken themes.”

So, I packed that heavy thought into my luggage on the way back to beautiful British Columbia. The airline didn’t charge me anything extra because they cared for physical weight rather than a hypothetical load. That was their way of working on natural history, I added that to my observation. Next time, when you see something different from a familiar setting, I’m interested in learning more about that. So, please share with me.

Dr. Zhenyi Li is a professor in the School of Communication & Culture and has been critical in establishing the MA in Intercultural and International Communication program at Royal Roads University.