Dr. Michael Real: How the civil rights movement of the 1960s can help us today 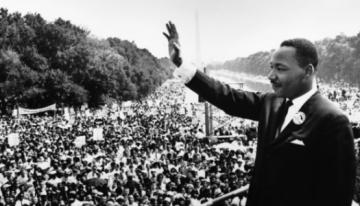 IMAGE: Civil rights leader Martin Luther King Jr. addresses the crowd during the March On Washington at the Lincoln Memorial, where he gave his "I Have a Dream" speech. AGENCE FRANCE PRESSE / Getty Images

I had the good fortune to work in the civil rights movement in the 1960s. As I look at what is happening now in America and beyond, it forcefully brings back to me some of the huge frustrations and problems, as well as the gratifying progress that over time made it all worthwhile. Are there lessons for today that we can take from those experiences?

First, making progress may not be as obvious as the setbacks and defeats. But the great steps forward make everything else bearable and must be relished. The obvious example for me is the moment in August 1963 when Dr. Martin Luther King, Jr. delivered his "I Have a Dream" speech. I was there on the Washington Mall to hear it in person. It was incredibly moving and has remained an inspiration to me through the 57 years since.

There is no such moment yet in the current struggles, but another lesson from that period is the patience that real change requires. Many dedicated people struggled for more than a decade for voting rights, equal educational opportunities, full employment, fair housing, and so much more. The later part of the 1960s was complicated by America’s disastrous war in Vietnam that, much like the coronavirus, seemed to multiply the frustrations and setbacks in civil rights.

Today, events accelerate rapidly and it seems nearly impossible to be sure in what direction things are heading. In retrospect, the ’60s look clearer, but they weren’t at the time. The two decisive events of 2020, the pandemic and the police killing of George Floyd in Minneapolis, are new to us yet and will take time to respond to and comprehend. Will 2020 pile as many disasters together as did the election year of 1968 with its assassinations, riots and continuing protests? We can’t know yet.

To me, the real culmination of the civil rights movement was the election of Barack Obama as president in 2008. I wept with joy that the struggle had achieved so much. Only 45 years after the "I Have a Dream" speech, when almost no one would have predicted it, a black man was the leader of the country.

But now this: A white power enabler leading the charge to reverse all that Obama stood for and accomplished. Which is the real America? I would argue that both are. Negotiating that divide is the deep challenge today.

Much like the 1960s, white people must look beyond their comforts and the status quo and confront some hard realities. In the 1960s, citizens were confronted with appalling inequalities, not just in voting, housing, education and employment, but in everyday life in the use of lunch counters, water fountains, restrooms and so much more of society that whites took for granted but Blacks could not access equally.

The parallel challenge today is to admit to the ugly realities of the killing of George Floyd and other black men by police, the high rate of COVID-19 fatalities among Blacks, the startlingly disproportionate incarceration rates for Black people, and other patterns of racial inequality below the headlines in press and politics globally.

Canada, sometimes called the designated driver of North America, has a special role to play in this. Canada is not shackled with a history of legal slavery. Instead it was the place where blacks were protected from bounty hunters who could operate freely anywhere in the United States. To Black people, Canada meant freedom. But today, alongside that enlightened history, Canada admits to recurring racist attitudes and practices against Indigenous Peoples and People of Colour. This makes Canada able to both relate to the racial problems that plague the United States and to discuss with sophistication the options available for addressing them. In my 16 years in Canada, I have been disappointed with instances of racism and yet impressed with an openness to admit to them and make progressive change.

Inflammatory charges from the White House and flamboyant coverage by the press have facilitated an easy escape for those disinclined toward support of Black causes and racial justice.

Yet can rioters be condemned without exploring what the causes are? After all, these riots are not self-created. They have been responses to events. They were triggered by one historic video — the knee-on-the-neck killing of an unarmed black man by a policeman who nonchalantly keeps his hand in his pocket. The video is devastatingly clear and epitomizes the pattern in similar incidents in recent years in Ferguson, Missouri, New York City, Louisville, and many other cities and towns.

Dr. King, whose protests were sometimes associated with urban unrest, pointed out that riots are cries from those who have no voice. His non-violent demonstrations were the opposite of riots in their extreme self-discipline. And there is only a small proportion of those who riot or loot among those who publicly support Black Lives Matter.

Perhaps most of all, those who support civil rights and seek racial equality cannot be defeatist. In the 1960s, there were many defeats and challenges that seemed to demonstrate a completely negative trajectory. But that is when the quality of members of the movement and the leadership came through. They were dedicated to making things better, not necessarily right away but in whatever time frame it took. On the train from Chicago to Washington and back for the March on Washington in 1963, there were songs and mutual reassurances that kept all of us, Black, white, and other, from being discouraged or pessimistic, despite inaccurate police predictions of violence at the March. And the resulting event was historically incredibly successful.

Dr. King was assassinated less than five years after the March on Washington; he was not yet 40 years old. He gave his life for this. Can we now not only honour him but imitate him, with honesty, hope, and action? If so, we shall overcome.

Original article from The Vancouver Sun.