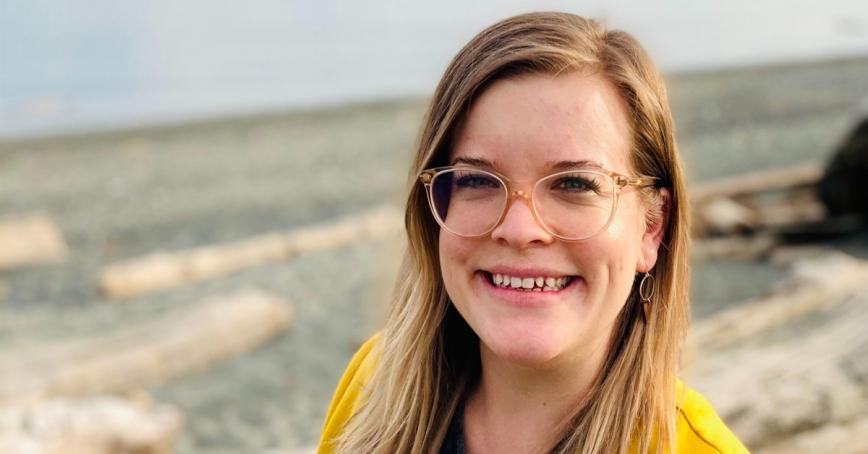 A Doctor of Social Sciences candidate at Royal Roads University is about to embark on a fellowship project researching how history is reinterpreted and passed from one generation to the next.

Ann-Kathrin McLean is the recipient of the Konrad Adenauer Fellowship through the Centre for Global Studies at the University of Victoria.

The fellowship, with the Jean Monnet Network on European Memory Politics: Populism, Nationalism and the Challenges of European Memory Culture, is to study contemporary political life in the European Union, focusing on the memory of the continent's totalitarian past and recollection of the World Wars, communism and colonialism, the Holocaust and Cold War.

The politics of memory

McLean says the politics of memory fascinates her.

“I know little about my own family history, and some of it is lost, mostly the parts about the Second World War,” she says,

McLean was born in Germany and spent the first nine years of her life there. She has fond memories her Opa Walter, who served in the German military during the Second World War and was captured and held in an American prison camp in Italy.

McLean learned that bit of family history from what she could extract from letters her grandfather wrote back then. But much in the letters is blacked out, censored.

She knows little else about her grandfather’s time in the military. She says she was too young to understand when she lived in Germany and the topic was silenced among family and friends. By the time she understood enough to inquire, her Opa had died.

That disconnect fueled a curiosity that still drives her as she begins her fellowship, she says.

The project involves researchers in Canada, Poland, France, and Hungary and starts in April. It will study contemporary political life in the European Union, focusing on the memory of the continent's totalitarian past and recollection of the World Wars, communism and colonialism, the Holocaust and Cold War.

McLean’s research looks at the relationship between collective memory, remembrance, and a site of trauma. She is interested how first-hand narratives become embedded in acts of remembering, specifically how they shape and inform the collective memory of the Holocaust.

“We were impressed with Ann-Kathrin’s multidisciplinary background, her impressive research productivity and her commitment to think critically through how scholarly knowledge can be made meaningfully accessible to different audiences,” says Dr. Oliver Schmidtke, director of the Center for Global Studies at UVic and Jean Monnet project team lead.

“Her doctoral research focusing on understanding Holocaust remembrance in the 21st century was a perfect fit for the Konrad Adenauer Fellowship,” he says. “Ann-Kathrin’s international background and her familiarity with the German context was another reason why we selected her as the successful candidate for the fellowship.”

“What's really intriguing about this kind of opportunity and this project is that they're interested in developing and expanding their scope in terms of how they can connect with a wider audience,” McLean says.

“I want to create more pragmatic tools that reach individuals around the globe because I think these kinds of topics are relevant to many cultures.”

The project will conclude at the end of 2021, with a conference planned for the fall to present the project's results.

McLean earned her Master of Arts in Tourism Management from Royal Roads in 2015 and began her Doctor of Social Sciences in 2017. She is also the research assistant for the War Heritage Research Initiative and teaches in the School of Tourism and Hospitality Management.

Through the fellowship, she hopes to mitigate memory loss across generations, as she experienced, and to create a sustainable and engaging framework for the future of Holocaust education.

She said some Germans feel a collective guilt about the Holocaust, even though many of the post-war generations have little to no connection to the experiences from the war.

She has only fond memories of her Opa, playing Für Elise on the piano for her him while he listened and smoked a pipe.

McLean is dedicating her research to him, to understand who she is and where she comes from.

“I'm kind of tracing his footsteps,” she said.