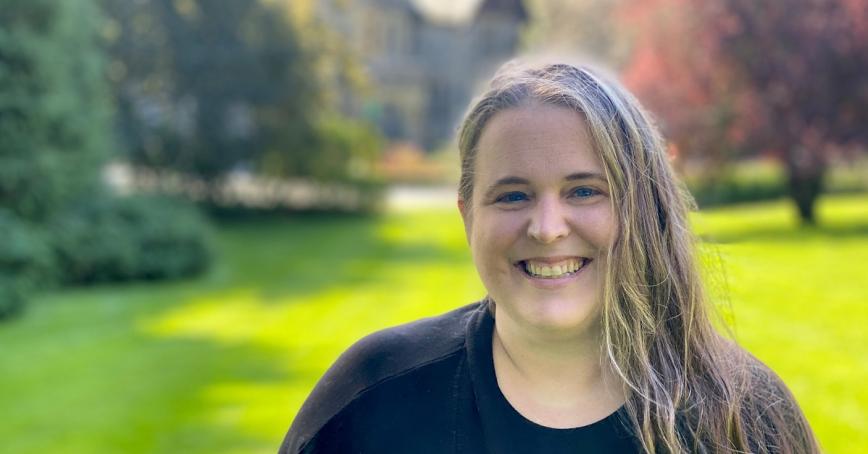 Dealing with people who were sleep-deprived helped Royal Roads University graduate Alli Boyd perk up her communication skills. Next, she wants to master them.

Boyd recently earned her Bachelor of Arts in Professional Communication from Royal Roads and won the Denis Racine Bursary from the Vancouver Island branch of the Canadian Public Relations Society.

Racine was president of both the national society and the local Vancouver Island branch. “I am inspired by Mr. Racine’s history of service and his professional legacy and how he fulfilled the Canadian Public Relations Society's values of belonging, learning, service and professionalism,” says Boyd, who is also a part-time student engagement assistant at Royal Roads.

“I hope to one day be in a position to help students the way that Denis Racine and his family have helped me.”

She plans to put the $1,000 bursary towards a Master of Arts in Professional Communication, starting in September.

“I just wasn't ready to leave,” she adds. “So that's my next journey.”

Boyd, after becoming a mother, first went back to school to become a veterinary assistant. Seeking financial stability, she left that profession and worked in respiratory medicine, where she first developed her communication skills managing social media channels, planning events, delivering speeches and reviewing materials.

She then moved on to a private sleep apnea company.

“Working in health care means you're working with all walks of life, and within the work that I did, I was also communicating with sleep-deprived people and sleep deprived people have a lot of trouble remembering things,” Boyd says.

That experience forced her to constantly refine her messages and how she communicated with clients.

“Dealing with sleep, you're dealing with a fairly intimate part of people's lives and they tend to tell you a lot about themselves and really connect with you. I had to learn skills to help manage relationships with people and expectations, and that's really kind of where I found my passion for communication.”

That led her to apply to Royal Roads. Her first application, in 2017, was rejected, which motivated her. She then took some prerequisite courses at the University of Victoria, earning a diploma in public relations,  applied to RRU again, and was accepted.

Boyd also joined the Vancouver Island branch of the Canadian Public Relations Society to forge connections in her new field.  When the branch needed a social media volunteer, she jumped at the opportunity. She also helped the branch with its annual membership drive, incorporating recruitment and the skills she had acquired in online presentations to masters and communications students at RRU as part of her practicum.

“I did a series of video interviews with members, and posted them all during the month of March, and then I did a couple of Facebook Lives, as well,” Boyd says.

She tried to ramp up the excitement and volume of content for the membership drive, using multimedia elements such animated GIFs.

The membership drive was a success.

“It was really a boon for my confidence, making me feel like my practicum had gone off really successfully,” Boyd says.

“The skills that I learned at Royal Roads University allowed me to take one idea and put it into action in a variety of forms.”

She recognizes that social media platforms are changing and found through her audits that Facebook doesn't generate as much engagement as it used to and that its audience is typically older.

“LinkedIn was actually where we were getting the most action.” Boyd hopes continuing her education will lead to a career in hosting large-scale events. She used to help run a vegan food festival in downtown Vancouver.

“My passion is events,” she adds. “I love bringing people together and creating memorable days.”

She also has thoughts of becoming a teacher.

“I love explaining things to people, making them understand and finding new pathways to get where they need to go and being a part of other people's success. That would be amazing.”