MAPC grad cuts through the noise of mental health conditions 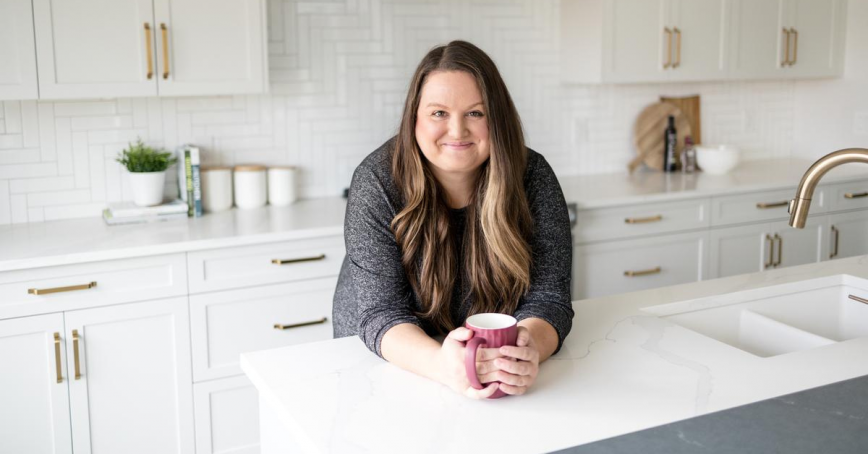 The noise in Megan Reimer's head sounded like radio static, and it wouldn't go away. She worried constantly, even about small things said. She feared she would get fired if she made a mistake at work. She stressed over text messages that didn't receive a reply, wondering if friends and family were getting tired of her.

She thought the noise was normal.

But through her 90-page master’s thesis, “What’s that noise? The blogged lived experiences of Mental Health Conditions (MHCs) through Interpretative Phenomenological Analysis,” Reimer learned it's not, and that she's not alone.

“Anxiety puts a filter on things,” she says. “You just can't quite get your message through.”

Her thesis is meant to help anyone, or everyone communicate better through the “noise.”

Reimer graduated from the Master of Arts in Professional Communication (MAPC) program at Royal Roads University in November, when she defended her thesis, earning an award of distinction in doing so.

“Megan’s research journey was unique,” says Dr. Chaseten Remillard, one of her instructors and who helped her decide on a thesis topic, “because it was interrupted a few times due to the realities of COVID-19 and the challenges of doing ethical research. In the end, she was able to find a means by which to collect really personal and intimate data through the use of social media and digital communication. This speaks to her ability to be flexible in her approach and the growing opportunities for researchers because of new communication technologies.

“The strength of Megan’s thesis, and ultimately why it was recommended for distinction,” continues Remillard, “was that she approached her topic with genuine care for the voices she was representing in the analysis, and her creative approach to the thesis format. Instead of trying to make the subjective seem objective, she leaned into the subjective and managed to provide meaningful and robust social scientific research whilst never losing sight of the fact that she was talking about people.”

Reimer spent 14 months researching the experiences of people with mental health conditions (MHCs), such as major depressive disorder, general anxiety disorder, and bipolar disorder. But because of the pandemic, she couldn't conduct in-person interviews. Instead, she collected information from blogs and articles written by others braving such conditions.

In doing so, she learned about herself.

At 18, she started working for WestJet. She loved being a “WestJetter,” the company and the culture.

She wanted to grow with the Alberta-based airline.

Reimer earned a bachelor of arts degree in professional communication from Athabasca University, but still wasn't being selected for the positions she sought. They went to candidates with master's degrees, so Reimer applied to the program at RRU.

“I really wanted to get to the next level,” she says.

Reimer started at RRU in September 2019, then, like so many others, lost her communications job with WestJet in March 2020, when COVID-19 health restrictions crippled the airline industry.

“It was really devastating,” she says.

WestJet was where Reimer grew up, “both personally and professionally.”

Her co-workers were her friends, some her best friends.

When Reimer was laid off initially, she thought it would be for three to six months. But it ended up being permanent.

“So it was a really tragic year,” she says. “I really wasn't prepared to leave .”

At home and unemployed, she got a puppy, an Australian Labradoodle named Brimley, who kept her company.

She also earned an editing certificate from Simon Fraser University, while working on her master's degree.

Reimer didn't intend on writing a thesis. At first, she thought she'd complete a course-based degree. But the communication theory course in her first semester changed her mind.

“Our professor asked us to define what communication is to us.”

Reimer had been looking at communication through a corporate lens, but realized it was more than that.

As part of her research course, Reimer had to develop potential thesis topics. She came up with two.

Remillard encouraged her to focus on the one about mental health.

“'I can feel your passion more so when you talk about it,'” he told her.

For her research method, she chose interpretive phenomenological analysis, which looks at the experiences of people and is not intended to be quantitative data analysis.

As she began her thesis, Reimer had an anxiety attack – not her first, nor last. She was hyperventilating and crying. She couldn't figure out a way to calm herself down.

“I overthink things, and we assume everybody overthinks things, but it's actually not true,” Reimer says.

“I sit and harp on things that I've said to somebody for days and then we'll come back to a conversation and I'll say, 'I'm really sorry for what I said two days ago, I've been thinking about it for 48 hours straight and I really didn't say it properly and I really want to make it up to you, or I want to just clarify this and that ...' And the other person would be like, 'I don't even remember what you said,' like they haven't been thinking about it for two days.”

The “excavation process of understanding my own anxiety kick-started the research process,” for her thesis.

One in three Canadians braves a mental health condition, according to the Public Health Agency of Canada.

“With the onset of MHCs becoming more prevalent, and the conversation around them becoming more prominent, it is imperative to dive deeper into the relationships between MHCs and communication,” Reimer writes in her thesis.

“This study investigates if and how MHCs present as noise in the communication flow, and create barriers to the meaning-making process, shared understanding, and connection between someone experiencing an MHC and a friend, peer, or family member.”

Reimer, also a teaching assistant at RRU, is fortunate to have family and friends who understand anxiety and act as sounding boards for her. Reimer can tell them what she thought they were thinking, and they'll clarify for her, like if they didn't respond to a text because they were working.

“I would never be able to navigate this if I didn't have people on the other side who understand my anxiety well enough to understand how to respond to me,” Reimer says.

“Getting to this point of mutual understanding was a process, not without its ups and downs, and a practice in vulnerability that took years to establish and build trust around. I needed a lot of reassurance from my loved ones that they wouldn’t leave or love me less,” she adds.

“I just wanted to know whether other people who were dealing with anxiety were also having these experiences of being totally misaligned with their loved ones, and if bringing them together in a conversation helps.”

The conclusion of her thesis is that mental health conditions do present as, and can be considered a form of noise.

She adds: “Understanding MHCs in this way can help us better understand those braving one, and how they experience interactions and communicate with their loved ones.”

In researching her thesis, Reimer felt connected to her subjects, and less alone.

“I think there was a little piece of me that really needed some kind of internal validation that I wasn't the only person who was experiencing anxiety and looking at it in this way.”

She has her own communications consulting company now, PearlsandPoets Editing, and enjoys working for herself.

Next, Reimer plans to continue her research and earn her doctorate in communications.