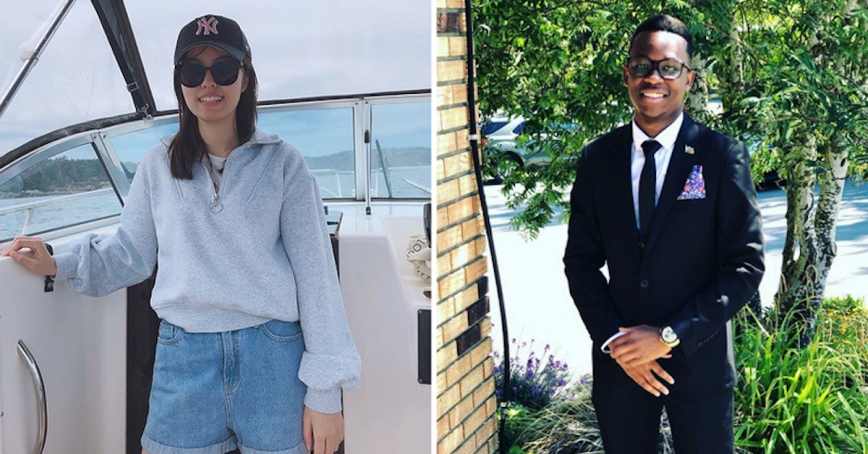 Haley Gong and Panashe Musemwa were fairly confident their education in Royal Roads University’s School of Tourism and Hospitality Management would ready them for their chosen careers.

But they didn’t know how ready they were until they virtually mixed, mingled — and competed — with hospitality students from around the world as part of an international conference.

Gong and Musemwa are each earning a Bachelor of Arts in International Hotel Management and were selected as Royal Roads’ only two representatives at the annual Young Hoteliers Summit, an annual conference started in 2010 by students from École Hôtelière de Lausanne in Switzerland. Designed as a forum where aspiring hospitality industry leaders could share ideas and knowledge, YHS also connects students with about 30 speakers, including executives from international hotel chains and other tourism institutions.

It was no easy task for the RRU students to get there. They were among more than a dozen who applied to represent the university, which formed a panel to narrow down its selection to four. A YHS panel then selected Gong and Musemwa, who were thrilled with the experience.

Gong, 23, who is from Jiangmen in southern China’s Guangdong province and has a background in social media marketing, said YHS drew her attention because she was interested in other students’ approach to their careers, especially considering the effects of the COVID-19 pandemic on the hospitality industry.

Musemwa, 22, a native of Harare, Zimbabwe, said the challenge of applying and participating in YHS attracted him, and he wanted to hear from industry professionals while gathering as much information as possible from hospitality students from around the world.

A challenge, an opportunity for real-world learning

“Challenge” is a key word for both as YHS participants are placed in teams that take on real-world problems as part of a conference competition. This year, one such challenge was finding ways to make hotels more environmentally friendly — and all done online and on Swiss time, meaning the RRU pair suffered extremely early mornings and long days.

Gong’s team worked over four days to create a hotel room that is accessible and sustainable, settling on a project to inform guests about their use of electricity and water, and to reward them for reducing their consumption of those resources via an incentive program.

Musemwa’s team worked on the idea for a regenerative elevator that would produce more energy than it uses, like regenerative braking in an electric vehicle recovers and stores kinetic energy caused when the EV’s brakes are applied to slow it down.

“It’s things like that that really challenge you and I believe it’s things like those you will really face in the real world — that kind of pressure that’s going to be there,” Musemwa says.

Says Gong: “It’s a real-world experience for you. Because you meet with your teammates just for a couple of hours, then you need to work together for four assignments in four days.”

“It’s crucial that they get those experiential and applied learning opportunities to really figure out their talents and apply those skills that they’re getting in their degree,” says Moira McDonald, the program head for the Bachelor of Arts in International Hotel Management and worked for more than two decades in the hospitality industry. “These are big moments.”

“They do come away with a lot of leaning in,” she says. “They’re not just sitting back watching in the background on Zoom.”

Both students also said they appreciated networking opportunities with their peers from around the world as well as the input from hospitality industry leaders, especially their reassuring words that the business is rebounding from the challenges of the pandemic and that jobs are available for young people like them.

As well, they say they felt well prepared for the experience by their RRU education, with Musemwa saying, “When we were at the conference, I didn’t feel left out or I didn’t feel like there was stuff we hadn’t discussed in class before. I felt well prepared, I felt proud, I felt like I knew stuff. It made me confident to share.” Gong agrees and notes McDonald has been caring and supportive, especially as she prepares for her next step: pursuing a masters degree at Ottawa’s Carleton University.

Musemwa, meanwhile, plans to return to Harare to develop his own property or help existing hotel properties to benefit the economy in his hometown.

Another student of the School of Tourism and Hospitality Management recently has also received recognition for her work. Cynthia Yang, who’s in her fourth year working toward a Bachelor of Arts in International Hotel Management, received a $6,000 Mitacs Award for her research project on innovative and cost-effective hotel operating solutions.

The project identified the economic and market impacts of COVID-19 on the hospitality industry and the critical industry issues; it then provided some examples of international best practices in the sector of emergency management response, and recovery and loss reduction management. The project concluded with recommendations for hotels to make changes in their operating procedures. Yang used part of the award to access additional research to support her project, with the rest going toward tuition to support further studies in hospitality.

Mitacs is a national, not-for-profit organization that works with universities, companies, and provincial and federal governments to build partnerships that support industrial and social innovation in Canada.