History is carved in stone at Royal Roads 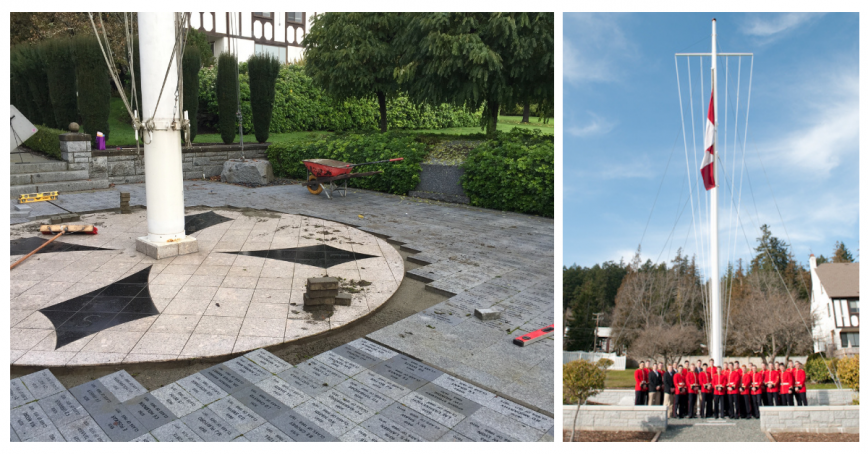 Saying something is “carved in stone” conveys certainty, finality and durability.

But while slabs of granite encircling a marble dial and flag mast at Royal Roads University are certainly durable, the names carved into them convey something else: history.

As a university, Royal Roads is just 25 years old. As an institution of learning, however, it dates back to 1940, when it opened as a naval college, eventually becoming Royal Roads Military College. And during the 55 years it educated officers in the Canadian Armed Forces, more than 7,000 cadets walked its lush, expansive grounds and the halls of Hatley Castle. Upon graduation, they earned the right to call themselves “ex-cadets”, signaling the end of their training, and it’s that name that they gather under, even today.

The names of more than a thousand of them have been inscribed in granite since the first paver stone was laid in 2010; now, the blank concrete “bricks” that surrounded them have been replaced by granite for a more consistent look, while new engraved pavers will be added each year as orders are accumulated.

Dave Wightman launched the paver stone project 11 years ago and says of Royal Roads, “It was a civilian university that came around to cherishing its military heritage. We, the ex-cadet community, were its history.”

Wightman, a Toronto native, attended Royal Roads from 1950 -52 before rounding out his military education at the Royal Military College in Kingston, Ont. and earning a degree in electrical engineering from Montreal’s McGill University. He went on to a long career in the military, with stints in Cold Lake, Alberta and the nation’s capital as well as postings in Germany and the Netherlands. He flew a variety of planes and even attended United States Air Force’s test pilot school at Edwards Air Force Base (California), and held jobs ranging from fighter pilot to commander of the Canadian forces in Europe for his final three years before retiring in 1986.

And he notes that from his class of 75 cadets, 52 are represented on those paver stones.

“We said we’re going to memorialize or remember the heritage exactly as it was when we were cadets there — in other words, we were nobody,” he says. Thus, his stone reads: “3334, DP Wightman, Class of 1950-1952” — no ranks, no medals, just one of many cadets who studied at Royal Roads.

“It’s worth reminding those of us who are still living and can go visit that paver stone area of our own stories and the stories of others who we were with,” he says. “But it also reminds people who are attending Royal Roads [now] that the place existed for a long, long time.”

Those stones are installed once a year, in time for Homecoming in September, and they’re dedicated by a chaplain, says Vivianne Jefferis, a member of RRU’s military heritage committee as well as operations manager for the university’s communications and advancement department. The 2021 Homecoming is celebrated virtually on September 10.

As of the next Homecoming, there will be 1,139 stones laid — 1,050 are former cadets, the rest past employees of the military college. Among the notable names are astronaut Chris Hadfield and three former Canadian chiefs of defence staff.

“It’s kind of seen as a memorial place, a place of reflection,” she says, “but it’s not a sombre place. When you have a group of [ex-]cadets there, you hear a lot of laughter because they’re sharing a lot of stories.

“I think for the ex-cadet community, it’s a very important place. It’s a place of reflection. A lot of the military heritage pieces on campus are inside [buildings] and this is an outdoor space for them…this is a place where they like to gather.”

The location of the paver stones and mast is within the walled garden, where the military college’s commandants once had their quarters, she says.

Jefferis credits Wightman, who still serves on the military heritage committee, for getting the paver stone project off the ground and for RRU’s ex-cadet community for their devotion to the place, noting former military college students have made many and varied donations to the university over its 25-year history. The heritage committee includes two RRU staff members and eight ex-cadets including John Miller, the current ex-cadet liaison on the paver stone project.

As for the paver stone project specifically, she says, “It’s something that they’re very proud of. And it’s a nice connection and collaboration between the university and ex-cadets that we can continue to support that program and continually enhance that space.”