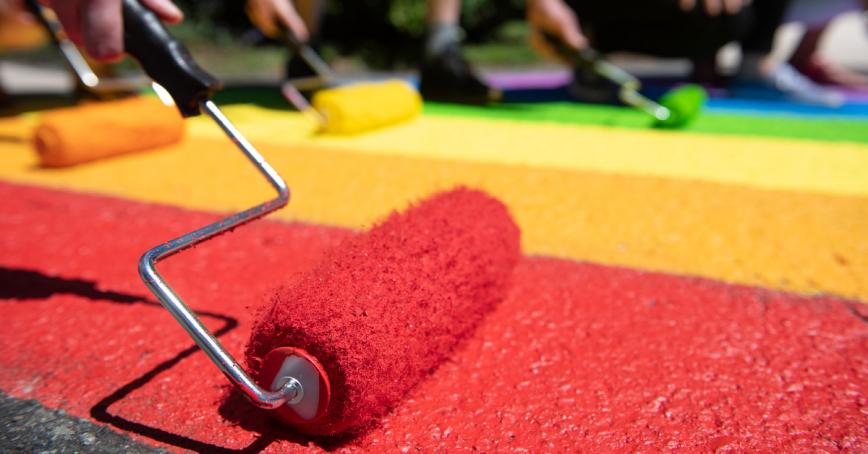 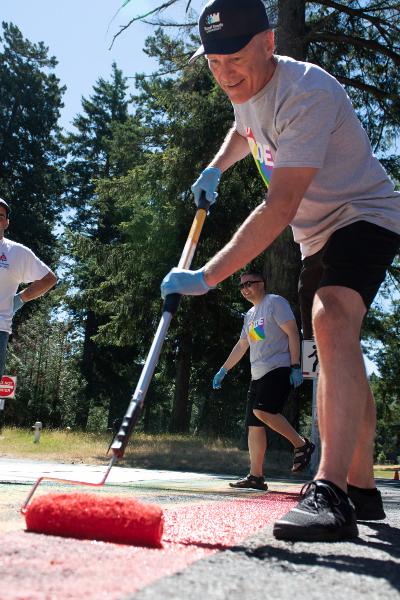 All are invited to come walk the rainbow – crosswalks, that is – as Royal Roads University introduces three new permanent Progress Pride crosswalks to celebrate equality, diversity and compassion.

To mark the beginning of Pride Week 2021, members of the university community ceremoniously painted one of the Progress Pride crosswalks June 25, on campus roads. Attending the painting were members of RRU Proud, students, faculty, staff and guests.

Progress Pride crosswalks honour LGBTQ2S+ members and coalition-building allies by including 11 colours: the traditional Pride flag colors, plus black and brown to honour Black, Indigenous and People of Colour (BIPOC) in the LGBTQ2S+ community, and light blue, light pink, and white, the colours of the Trans Pride flag.

“I grew up, like so many people my age, in a society where homosexuality was widely condemned. I lived in fear that my real identity, as a gay man, would be discovered and so I hid from myself, my family, and society,” says Royal Roads President and Vice-Chancellor Philip Steenkamp. “It took me a lot of courage to eventually come out at the age of 38, and I’m hugely grateful for the acceptance and support I’ve had in this community.

“I know for many this is not the case — they face daily discrimination, persecution and worse. To those of you out there, especially young people, coming to terms with your sexual orientation or gender identity, know that RRU is a community that will support you and care for you.” 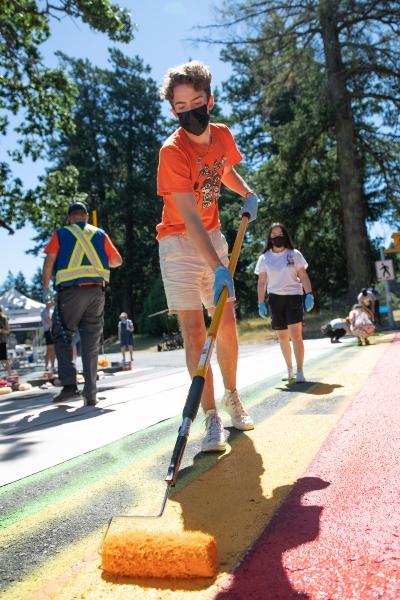 “Love is love and people should be able to be themselves. I am delighted Royal Roads is creating visual reminders about the importance of commemorating, educating, inspiring and celebrating our diverse community,” says Royal Roads Chancellor Nelson Chan. “We invite everyone to enjoy the new crosswalks and gather in Pride on campus as part of your celebrations.”

The crosswalk at Royal Bay was defaced with homophobic slurs on the eve of the International Day Against Homophobia, Biphobia and Transphobia, observed on May 17. Students, family and staff were out repainting the next morning. Their show of Pride, resilience and community was part of what inspired Royal Roads to paint its own in solidarity.

“The Royal Bay incident is a local reminder that we remain in a time of adversity for many, here and around the world,” Steenkamp says. “Our Pride celebration is a key aspect of our work on equity, diversity and inclusion at RRU. Through projects like this, we encourage people to choose compassion and dialogue over discrimination, to choose equality and liberation over oppression.”