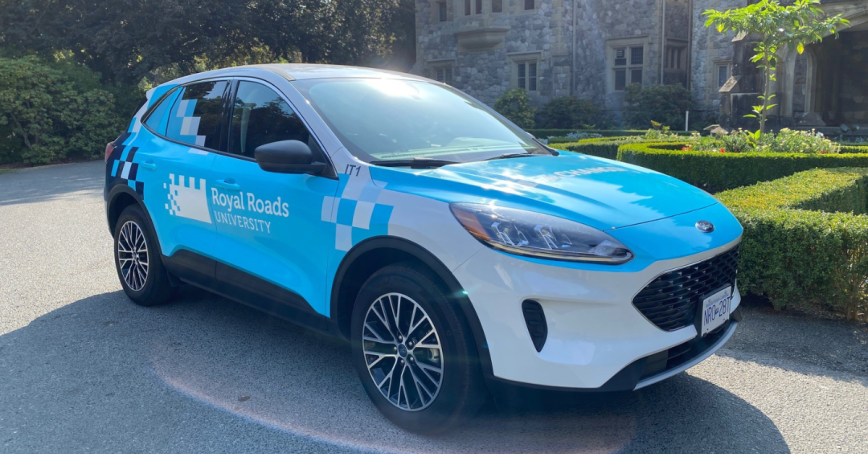 Sometimes, small numbers can add up to create a large impact. For instance:

The university is Royal Roads in Victoria, which recently added the SUVs — a trio of 2022 Ford Escape SE plug-in hybrids —to its fleet of vehicles. The day is Sept. 21: Zero Emissions Day.

The potential impact can be found in the example set, the message sent and the commitment modelled.

RRU’s Climate Action Plan, released in early 2022, includes a commitment to achieve a net-zero campus by 2050 (with a 65 per cent reduction by 2025 and 80 per cent reduction by 2030). Towards that goal, Royal Roads signed a West Coast Electric Fleet pledge in 2021, committing to at least 90 per cent of all new vehicles purchased being electric and adding EV charging stations to its fleet parking area. The goal is to electrify the entire university fleet by 2030, phasing out inefficient vehicles. Earlier this year, the university received a $47,777 grant from the CleanBC Go Electric Fleets Program to support electrical infrastructure improvements on campus and has begun the installation of smart EV chargers in its public parking areas.

RRU President and Vice-Chancellor Philip Steenkamp says both the fleet electrification and the university’s observance of Zero Emissions Day are “the kind of role modelling we can do at universities that I hope will inspire people, not only people who work here but the broader community, too, to see what’s possible and how you can actually get there.”

“It’s only a day, I recognize that, but it’s a day to pause and reflect, and to take action,” he says, noting RRU has reduced fleet-associated greenhouse gas emissions by 40 per cent since 2014. “It’s a day to think about our individual reliance on fossil fuels and how we might shift our lives and consumption habits to reduce and eliminate that reliance.”

Steenkamp lives his commitment to emissions reduction daily. Since July 2020, he has commuted to RRU by bike every day but five, racking up more than 12,800 km on two wheels and even selling his Honda CRV. At the same time, the university is improving its cycling infrastructure so more staff and students are able to use no-emissions transportation to get to campus.

“I know it’s small in the grand scheme of things, but if you multiplied that across the population, it would be significant,” he adds, noting that Zero Emissions Day — which started in 2008 in Nova Scotia — is “really a day to think about that, to think about how we can make that personal contribution.”

On top of that, addressing climate change is integral to Royal Roads’ mission, he explains, saying RRU’s three areas of focus and expertise are: climate action, leadership and learning, and responsible business and social innovation.

“It’s absolutely part of everything we do. Our Climate Action Plan calls for us to put an environmental lens on everything we do: all our operations, our programming, our research.”

Dr. Robin Cox, RRU’s program head for the graduate programs in Climate Action Leadership and the director of the Resilience by Design research lab, agrees, saying, “As an educational institution, we are modelling what we are teaching, which is: we need urgent action on climate change and emissions reductions is one critical component of that.”

Cox says climate change is “not an environmental problem. The political-global economic system that drives consumption and emissions production is the problem,” and “the catastrophic environmental issues we face are a consequence that system and our profit-over-environment ethos.”

Thus, she adds, “Our primary role in addressing climate change as a post-secondary educational institution should be grounded in our mission, which is to support people having the knowledge, skills and courage to transform the world. Climate change needs to be woven into everything we do in ways that empower each and every person to take action.”

Cox doesn’t discount the value of setting an example, either. “Because of the size of the institution, our emissions reductions are also symbolic, signalling, hopefully, to other institutions and other organizations — and to individuals and businesses — that reducing our emissions is both critically urgent and doable.”

“These are small steps from a small institution, but they’re important steps because all emissions reductions are important at this stage in global heating.”

As for this one day at this one university at a time when Pakistan has been devastated by massive flooding and other parts of the world are being hit hard by the effects of the climate crisis, Cox says, “Ultimately, we need to be taking advantage of every instance we can to build momentum around taking action on climate change if we are going to avoid the worst of the catastrophe.”

By the numbers: Reducing emissions at RRU