Chinese workers and RRU: The price they paid; the pennies they made 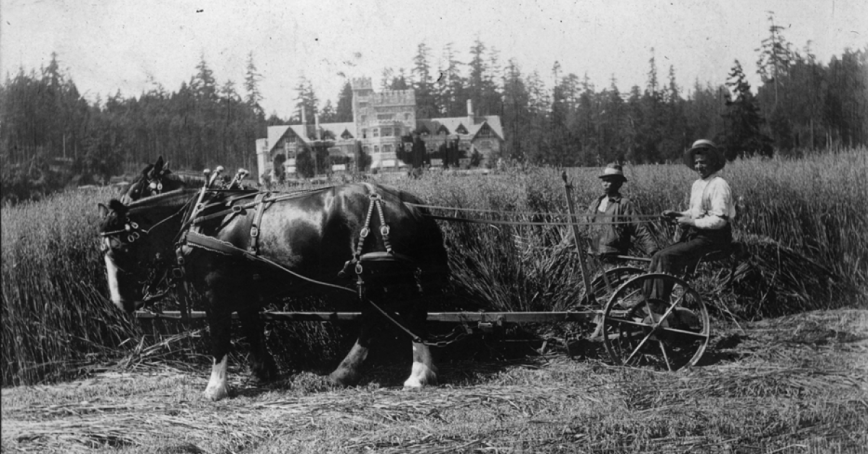 To tell the story of the men who helped build Hatley Park more than a century ago, you first must consider two buildings that existed on the property at the time.

One is U-shaped, wood-framed, perhaps a little drafty, not too sturdily built, and is tucked away among some trees.

The other is massive — 200 feet long, 86 feet wide — a solid castle, built of stone, boasting an unobstructed view of the ocean, mountains looming in the distance.

What the handful of residents of this castle, crafted after similar structures in Scotland, can’t or don’t want to see from their 25 metre-high turret, is that first building a few hundred metres away or the dozens of men who eat, sleep and bathe there.

Those men, labourers from China, came to Canada in the late 1800s or early 1900s. Without their long hours and grueling efforts, the Hatley Park and Royal Roads University of today might be quite different.

Routinely working 60-hour weeks, 127 Chinese labourers were employed at Hatley Park in 1911, says RRU Archives Manager Jenny Seeman. They did landscaping, helped create the extensive gardens, washed the estate’s laundry and toiled around the castle. Mostly, they did manual labour — brutal work that, at about 15 cents an hour. That was considerably less than the wages paid to European immigrants. The Dunsmuirs, owners of the estate, were known for hiring Chinese workers because they could pay them less, says Seeman.

The census data shows that only men ever resided in the camp. One of the intentions behind the head tax was to make it financially unfeasible to bring whole families over. Those that had been saving to bring their wives or other family members would have had their hopes destroyed by the Chinese Exclusion Act, which effectively banned immigration from China between 1923 and 1947.

“When they first arrived in Canada, it was very often a chain migration situation because relatives had brought them over, but then they were in debt for a very long time trying to pay that back,” Seeman explains.

“Some labourers waited years to bring their families over, while others may have married here,” according to the 2018 article. “It is likely that some returned to China after labour demand dried up, while some never returned to China and died on these territories.”

The reason it’s written they “may” have married and some “likely” returned to China, is due to the dearth of historical information on the labourers. They were usually referred to by numbers, not names.

“The fact that we know so little about the Chinese labourers who were here is the biggest indicator of the racism of the time. They just weren’t part of the record. They weren’t considered important enough,” says Seeman.

“It’s essential we acknowledge the importance of the Chinese labourers in the development of the entire property,” says Philip Steenkamp, Royal Roads’ president and vice-chancellor.

“They may have been taken for granted when they were working long hours here 110 years ago, but today we know and appreciate their sacrifice,” he says. “Certainly, when I walk around our amazing campus, I’m humbled thinking about the amount of work that went into the site and those workers’ contributions.”

Nelson Chan, RRU’s chancellor, is himself the son of immigrants — his mother from mainland China, his father from Hong Kong — who he says worked to ensure their children were raised and educated as westerners to avoid the racism and discrimination they’d experienced.

He says it’s important that the university has the courage to acknowledge more difficult parts of its past, even as it celebrates its history, noting, “we must recognize our past to appreciate our present and inform our future.”

Of the Chinese workers, Chan says: “Hatley Castle and the property as a whole wouldn’t be what it is today without the contributions of Asian immigrants. Everything from the grounds and gardens through to the castle were influenced by these Chinese workers in building and operating various parts of the estate.”

“It’s a fundamental, foundational piece of the whole story.”

‘It was all about searching for a better life’

While the efforts of those labourers are known, what happened to them isn’t, Seeman says, noting census documents show a drop from the 1911 count of 127 men to the 1921 tally of just 30.

What happened to those workers? Did they move on to other jobs on Vancouver Island or elsewhere in BC or Canada? Did they have families, build lives here?

“It’s all conjecture because even when there are descendants of the Chinese workers who were here, the chances that they even know the stories of their grandparents and great grandparents is quite low because people didn’t want to talk about the discrimination they had suffered through and that they had overcome,” she says. “It wasn’t really a source of pride.”

In their story, however, Seeman finds plenty to admire.

“I feel like it’s important to get across the determination of these men. In some ways, it’s kind of a parallel story to the Dunsmuirs’ story. They came over from Scotland in search of a better life and because they had all the advantages white people had, they were able elevate themselves in society. But the Chinese people who were coming over really had the same goals in mind — it was all about searching for a better life, it was aspirational.”

She adds: “I find it impressive that they went through this, and their understanding that they had to suffer for the next generation to have a better life.

Canada marks Asian Heritage Month in May. This is the first in a series of RRU articles celebrating the month, which focuses on stories of innovation and perseverance.