Can a $5 bill change the world? Billy Pratt thinks so 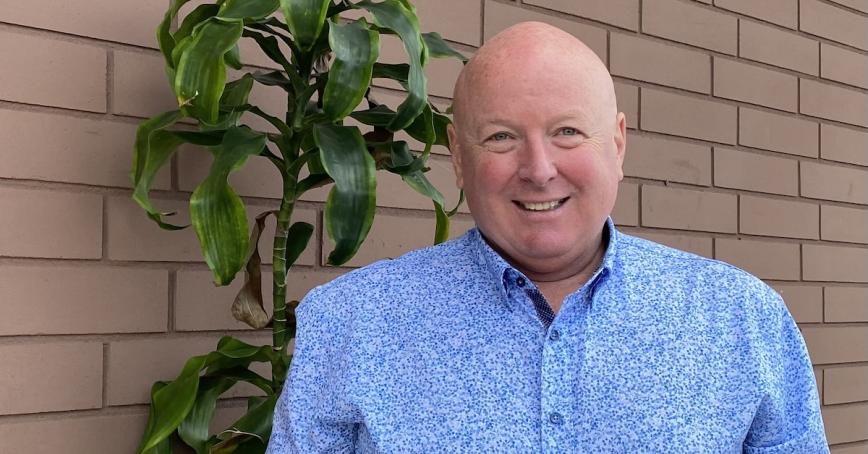 You find a $5 bill in the pocket of a jacket you haven’t worn for a while. Quick, what do you do with it?

Do you just slip it into your wallet? Upsize your usual coffee order? Treat yourself to an ice cream cone on a scorching summer afternoon? Maybe slip it to your child, saying, “Here, kid, buy yourself some candy”?

For past and future Royal Roads University student Billy Pratt, however, the question isn’t what would he do with five bucks but what would others do — and what would it mean to them?

Earlier this year, Pratt, a graduate of RRU’s Master of Arts in Leadership program, had an idea for a personal project he calls The $5 Story.

The CEO of Eden Care Communities, a registered charity that runs group homes, a daycare and seniors’ care homes in Saskatchewan, the Regina resident has an extensive network of contacts across Canada from his work, his volunteer endeavours and his time as a competitive swimmer and water polo player as well as professional swim coach. He mailed 50 of those contacts a $5 bill along with a letter asking them to spend it on whatever they wanted, then fill out a brief online survey explaining what they’d spent it on and why.

The responses were varied. A handful bought Smile Cookies from Tim Hortons and gave them to colleagues or strangers, he says. Some handed their bills to acquaintances working in health care for a cup of coffee or to strangers begging change outside liquor stores. Others engaged in self-care, one even treating themselves to a vanilla milkshake following a COVID test.

“Most of the people gave it away,” Pratt says, noting several charity donations where survey respondents topped up the $5 with their own money.

More important than how the money was spent, however, was how people thought of the exercise and talked about it with others, he says.

“Just about everybody who participated said it made them pause — there was this deliberate pause in their life that made them think about something so simple.”

“It was interesting to put so much thought into spending $5,” one survey respondent wrote, “and also interesting to think that you spend $5 all the time but it doesn’t bring you as much joy until its purpose was to bring joy.”

Another wrote: “This was an incredible exploration of the human spirit. A couple hundred small kindnesses will reverberate through those tasked with making these choices and those who receive the benefits alike.”

Pratt notes that several participants said they’d discussed with their families or friends — one with his rec league hockey team — how to spend the money, and indeed one wrote in their survey response: “You had me and my family thinking about appreciating people (worth a lot more than $5) for several days!”

“I’m all about inspiring generosity,” Pratt says when he’s asked why he embarked on this project.

“My mission in life is to make the world a better place. My business card says, ‘Inspiring a better world.’ I know it sounds very egocentric but that’s what I try to do. I can’t build bird houses, I can’t fix a car but I might be able to inspire somebody to be a little better.”

He says the idea for The $5 Story popped into his head one day — “It just felt right and I thought, ‘I need to do this.’”

He credits his Royal Roads education — and its core values of caring, creative and courageous — with giving him the confidence and audacity to take on unusual projects, such as an entire program of events involving a Santa suit, dancing girls and polka music as a final expression of love for his dying father in 2020.

As he prepares to start another RRU program, the Master of Arts in Human Security and Peacebuilding, in January 2023, Pratt says, he carries with him the lessons of The $5 Story, which he plans to write up and post on his social media channels.

“There’s a selfish lesson and then there’s a greater good lesson,” he explains. “The selfish lesson is that I’m capable of doing what I think I can do. I’ve got some things to offer.

“On a global level, I think the world is more generous than we give it credit for and that’s something I’d like to figure out how to explore… particularly in today’s world when we see the polarization of… pick a topic.

“I think there’s more kindness in the world and people just need reminders.”

Sometimes, all it takes is $5.

A selection of additional comments from participants in The $5 Story:

What’s next for Billy Pratt?

Pratt, still living RRU’s caring, creative and courageous values, says he has written a musical based on the true story of a group of 10 women who trained for nine months to swim through the Greek islands for a fundraiser. He was their swim coach and says of the production that he hopes can be brought to the stage sometime next year, “It’s a pep rally. It’s an event to bring people together.”