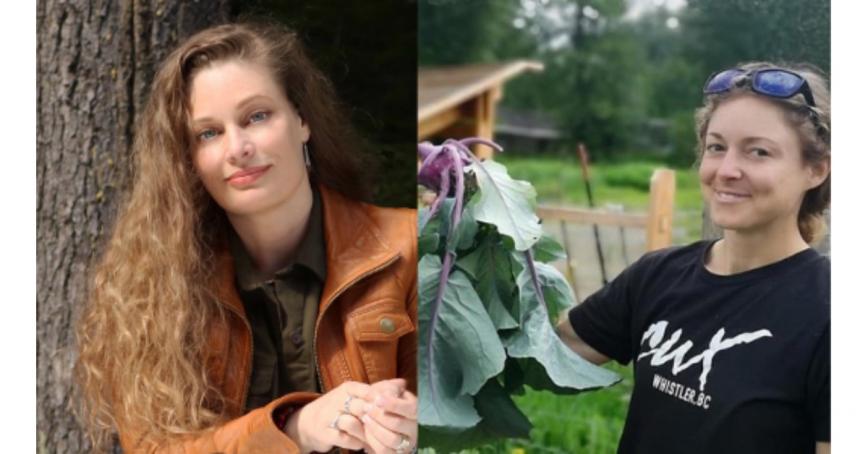 Kristina Bland and Sherry Hilliard have plenty of differences. One is from northern California, the other from Ontario. One led wilderness adventures, the other acted in more than a hundred television commercials. One worked on farms, the other operated a yoga studio.

But Bland and Hilliard have much more in common.

They both travelled thousands of kilometres — one from Ontario, the other from California — before settling in British Columbia’s Sea-to-Sky corridor.

They both make their livings in nature, though the focus for one is bears and for the other broccoli.

They both started small businesses that are focused on quality over quantity.

And they are both winners this fall of Royal Roads University’s Eric C. Douglass Centre for Entrepreneurial Studies Scholarship. The honour and accompanying $10,000 prizes go to the university’s most promising entrepreneurial graduates.

While Kristina Bland conceived of Nurture in Nature Community Farm early in the global pandemic, the seeds for it were planted during her childhood in Sebastopol, California, a city about 100 km north of San Francisco. She grew up foraging in the forest or picking lunch from her mother’s garden.

She later headed south to attend the University of California San Diego, where she earned a degree in linguistics with a minor in environmental studies. The hiker and rock climber joined an outdoor adventure club there and became a guide.

Bland was living in Australia and working for an environmental education company, she said, when Royal Roads “found me.”

“Every time I put in some sort of a search for a different program I was looking for, like environmental education…Royal Roads just kept coming up.”

She arrived at the university’s lush, green Vancouver Island campus in June 2018 and will complete her final project to earn her Master of Arts in Environmental Education and Communications soon. But it was March of this year when she created Nurture in Nature. She leased unused land in Pemberton, BC from farm owner Kim Rainthorpe and created a 10,000-square-foot permaculture garden that produced more than 400 kg of food with its farm-to-fork ethos and the hard work of Bland as well as Nurture in Nature members who contributed their labour.

The next step in her business plan — aided by the scholarship money — is to expand, focusing on memberships, workshops (topics include permaculture and herbal medicine) and events such as nature walks and educational programs.

And the university is integral to this plan and the future of her business.

“I thought I was going to Royal Roads to gain knowledge,” Bland said. “Really what’s worked so well for me is… knowing there are so many people out their working hard, working with me, and I can always rely on the resource. It’s the network, and knowing we can do so much more together than I could ever do on my own."

Sherry Hilliard likes to change things up. She has lived in Toronto, the Kootenays and, now, Whistler. She has worked as a TV and film actor, had yoga and leather design businesses, operated her own equestrian centre and managed two insurance offices.

Now, with 10 years living in BC’s largest resort town with her family, she is running Whistler Photo Safaris Ltd. with her husband, Jason Coleman. From May through October, the company’s professional guides take visitors on Jeep tours of the Whistler Olympic Park, where they can view the area’s beloved black bears in the wild.

And in the midst of the steady growth of her business — in a normal year, Whistler hosts three million visitors and “everybody wants to see a bear,” says Hilliard — the Ontario native who previously studied business management decided to pursue a Bachelor of Commerce in Entrepreneurial Management at Royal Roads.

“I really loved that it was a fully curated program, so all the courses were predetermined. You sign up and do one step after another,” Hilliard said, adding, “I loved the campus. The school itself was a huge draw.”

And with the focus on entrepreneurship, “It really felt like the whole program was made for me.”

With her degree, along with her varied experience, Hilliard said she’s optimistic as Whistler Photo Safaris aims to expand its offerings even as it deals with the effects of the pandemic on tourism markets worldwide. Focusing on quality over quantity, she and her husband want to increase the educational component of their six-year-old business and the participation of families.

“I’m super optimistic. I’ve kept optimistic the whole time, even though [the pandemic] was a major blow. Our business depends on finding wandering wild bears. We definitely are used to adapting.”

Noting that 90 per cent of their business comes from visitors from outside of Canada, Hilliard said she’s hopeful that the development of a vaccine for COVID-19 will mean a return, next year, to open borders and the success Whistler Photo Safaris experienced in its first five years.

And, like Bland, the veteran actor believes Royal Roads’ Douglass scholarship will play a role in that.