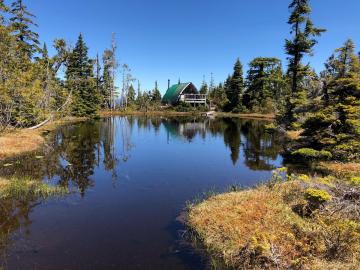 I have to admit to having a life-long love affair with the outdoors and I know that many who are drawn to environmental science or fieldwork have this in their blood. My love affair will shortly be tested to the extreme. A couple of months ago I managed to get a start date in the global lottery for the 2700-mile Pacific Crest Trail. This journey by foot will take me through numerous eco-zones, deserts and mountains and I cannot wait to get going. As I started to plan this adventure, I discovered a sub-culture of so-called “thru-hikers”, a seemingly crazy group of people obsessed with shaving grams off their gear and accomplishing amazing feats of endurance and grit. They all have “trail names” which have taken over their given names in correspondence and have peculiar hiking groups “tramilies”. A weird lot indeed!

We are all to some degree, I suspect, attracted to the adventure or the peacefulness of the outdoors. Doctors are now prescribing nature as a cure for things that ail us mentally and physically. Parks Canada recently joined, allowing doctors to write a prescription for an annual Parks Canada pass. Nature Kindergartens abound as we struggle to erase nature deficit disorder and we are even told to “forest bathe” and take up the phytoncides, a heady brew of wood oils that gives the smell of the forest.

As I prepare for my big hike, I have reflected on how my life has been influenced by nature and the outdoors. It seems that every major decision I have made was influenced to some degree by my proximity to “wilderness”. For many, it is their love of wildlife that attracts, for hunters it is the hunt, for climbers and mountain bikers the thrill. But for me, it is the wildness and solitude of being far away from civilization. It is that escape that I seek and have been privileged to be able to do throughout my life. As an older person watching the preparations of twenty-somethings for their big hike, I am appalled by their plans around vlogging, blogging and Instagramming every inch of their 2700-mile hike and what are they going to listen to as they hike. I am also appalled at anti-vaxxers and right-wing extremists. But then I get out in the wild, relax and remember the mantra of the experienced thru-hikers, HYOH – Hike Your Own Hike.