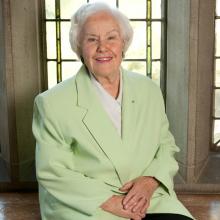 Helen Hughes has worked throughout her life as a civic leader, organizer and volunteer.

Born in Vancouver, Helen moved to Saskatoon in 1950 when her father accepted a position as an Anglican minister. In 1954, she earned a BSc in Home Economics from the University of Saskatchewan and, that same year, married Ted Hughes.

Helen became very active in volunteer work in Saskatoon and, in 1976, joined city council where she remained for the next four years. As a councillor, she focused on finance, planning and social services issues with an emphasis on the interests of people from First Nations communities. Her work building bridges between urban native and non-native residents resulted in her appointment as a member of the Order of Canada in 1982.

After 30 years in Saskatoon supporting numerous community and philanthropic organizations such as the Consumers Association, the Allergy Foundation, the YWCA, the Big Sisters and the Regional Psychiatric Centre, Helen returned to British Columbia in 1980. She worked in the Ombudsman’s Office for five years, and then joined the B.C. Council of Human Rights.

In 1990, Helen was elected to Victoria’s city council and served for 18 years where, once again, she quickly became known for her work in community service and youth programs.

As a member of the Victoria Public Library Board, Helen founded the Lifelong Learning Festival held on International Literacy Day. As councilor responsible for liaison with downtown Victoria, she worked with the Medical Health Officer to organize the Capital Region Action Team on Sexually Exploited Youth. She launched fundraisers such as the Souper Bowls of Hope for the Victoria Youth Empowerment Society in support of its programs, including a summer drop-in centre and a Youth Hospitality Training Centre. Helen also initiated a massive spring cleaning of the whole downtown area called the 60 Minute Scrub Up.

Helen holds honorary degrees from the University of Saskatchewan and the University of Victoria. Royal Roads awarded Helen and Ted with the 2009 Chancellor’s Community Recognition Award. Helen has also received the 2012 Ann MacLean Award for Outstanding Service by a Woman in Municipal Politics, a 2009 Lifetime Achievement Award from Leadership Victoria, the 2008 Generous Spirit Award from the Victoria Foundation and the 2012 Queen Elizabeth II Diamond Jubilee Medal, among other accolades.