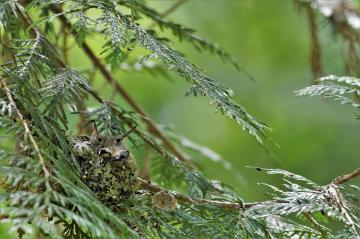 In the history of life on Earth, the majority of species are extinct. The Big Five mass extinction events removed millions of taxa. Groups that were once as commonplace as insects are today, have vanished. No human has ever seen a living trilobite, or ever will. It's a terrible irony that the one species to have discovered the five previous mass extinctions, is currently setting the stage for the sixth.

Every organism today can trace its lineage back to the origin of life. Think about that for a second and look around you. That tree you are seeing, or that bird, is the current end link in a chain of descendants that has persisted -unbroken- for over three billion years, through five periods of unimaginable destruction. A species is not extinct until its last viable population has been extirpated, and although the ancestors of today's species will likely have suffered "bottlenecks", during which the last population may have been hanging on by its fingernails, they came out the other side. Populations can bounce back, given the opportunity.

What would these bottleneck populations have looked like? Imagine a dozen ferns in a ravine surrounded by the ash from a nearby volcanic eruption. Picture a few hundred treefrogs in the last patch of forest atop a tall mountain that provides low enough temperatures during a period of planetary heating.

And here's the beautiful thing: isolation of small populations, with its associated genetic drift, is a driver of speciation. That population of frogs on the mountaintop? On top of the next mountain, there's another small population of the same species. Over time, each population will lose alleles randomly, perhaps for colour, perhaps for song. Time passes, the planet cools and the populations migrate to the lowlands, where they eventually meet after many thousands of years apart. They may interbreed, but there may now be barriers to breeding, for instance a change in colour markings or song that renders the males of one population unattractive to the females of the other. We now have two separate species.

Make no mistake, the biosphere is headed for worse days. We've let the brake off a thermal juggernaut, poisoned our waters, and converted wildlands to wastelands. But life is tenacious. Think of all those unbroken chains, and how you might be able to contribute in your own way to forging a new link. For instance, if you are ever the custodian of a piece of land, leave it wild. If you can, devote time or other resources to help maintain or expand protected areas. Small actions, at the level of the individual, can make a difference in the case of small populations.

Maybe the link you help forge will be one that continues on into the future.