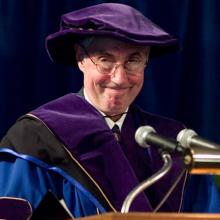 In his five years as Vice-President, Academic and Provost of Royal Roads University Dr. Ronald Bordessa has overseen the introduction and development of new programs and academic initiatives that have prompted significant enrolment growth for the university. In addition, during this time the applied research profile of Royal Roads University and its engagement of pressing issues in society and economy have taken their important place in the university’s mandate.

Dr. Bordessa was born in Wales and attended the University of Wales at Swansea, graduating with a Bachelor of Arts honours degree in Geography which was soon followed by doctoral research at Liverpool University, where he was awarded a PhD in Geography.

He was appointed to the geography department at Atkinson College at York University in Toronto while he was still a doctoral student. That appointment turned into more than three decades of service to York. During that period Dr. Bordessa’s eclectic research interests resulted in publications that covered aspects of social life in urban areas, essays in literary studies, environmental issues and the politics of land development.

His professorial duties at York soon evolved to encompass an administrative academic role which evolved from a posting as a program coordinator for the urban studies program to becoming chair of both the Geography and Social Work departments. He was named associate dean and then dean of Atkinson College on two occasions - renamed the Atkinson Faculty of Liberal and Professional Studies under his leadership.

On July 1, 2006 Bordessa takes up the position of president of Ontario’s newest university, the University of Ontario Institute of Technology, an institution that has learned from and built upon the educational innovations introduced by Royal Road University over the last decade.

During his five years as Vice-President, Academic and Provost of Royal Roads University Dr. Ronald Bordessa has overseen the introduction and development of new programs and academic initiatives that have filled an important niche in Canada’s post-secondary educational environment. In this time Dr. Bordessa has ensured that applied research at Royal Roads University, and its engagement of pressing issues in society, and economy assumed increased significance in the university’s mandate.

Besides being called a wise, kind and gentle colleague by his peers, Dr. Bordessa has also been described as a strong strategic thinker with a high degree of integrity. He distils long-term goals formed from a keen and comprehensive view of institutional objectives. This skill has served him well as he has performed leadership roles in institutions of higher learning in Canada and abroad.

A big-picture perspective has also helped Dr. Bordessa serve communities locally, nationally and internationally throughout his academic and administrative career. It is this perspective that also helped Royal Roads University reach an important new phase in its development. It is part of the reason Royal Roads today is seen as one of the leading educational institutions fostering change in the academic world.

Dr. Bordessa has been recognized for working towards the highest quality of an institution, while also exhibiting a patient persistence in reaching targets he has set.

This is probably why Dr. Bordessa was sought out by the University of Ontario Institute of Technology in the hope of achieving goals similar to those reached by Royal Roads under his leadership.

Innovation has been a hallmark of Dr. Bordessa’s career. It’s that kind of innovation and leadership that lies at the heart of what Royal Roads University seeks to achieve as an institution of higher learning that pushes the boundaries of traditional teaching and learning.

In recognition of a lifetime of valuable and tireless service to post-secondary education, Mr. Chancellor, I am pleased to present Dr. Ronald Bordessa for the degree, Doctorate of Laws, honoris causa.