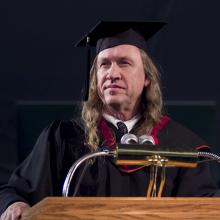 Rev. Al Tysick is the spiritual leader of the Open Door, an inner city ministry in Victoria serving an estimated 600 people whom Tysick refers to as his “family.” Beginning in 1987 as an outreach program operating from an old Sunday School Room at the former First Metropolitan United Church, the Open Door recently broke ground for a new facility to replace the aging Pandora Street ministry, thanks to grants totaling $10 million from the federal, provincial and municipal governments as well as generous donations from individuals and businesses in the community. Expected to open by September 2007, Tysick’s long-time dream will provide 45 transitional rooms, meal service for residents and the homeless, a drop-in centre, and transitional services.

Tysick was born into poverty himself, the only son of five children living in a low-income Ottawa neighborhood and raised on welfare by his mother. At age 13 he found his calling to the ministry while walking home on a snowy Christmas Eve when he witnessed a Salvation Army officer stepping over a drunk on the street without stopping. That drunk was Tysick’s father, a Second World War veteran who returned from overseas addicted to alcohol. Among his feelings of embarrassment, hate and fear, Tysick realized the church should be doing better.

With his mother’s encouragement, Tysick earned a science degree and worked as an electrical engineer with the National Research Council before studying theology at McGill University. Tysick started his street ministry career near Ottawa, where he opened his first drop-in centre and helped build 38 houses.

Tysick usually arrives at the Open Door by 5 a.m., often seven days a week, and does outreach work every Friday. He often works 14-hour shifts. The former Victoria Citizen of the Year has become a voice for some of the city’s most vulnerable. In recognition of his boundless empathy and tireless commitment to Victoria’s poor and homeless, this summer Time Magazine included Tysick in its list of Canada’s Heroes.

Tysick lives in Sooke with his wife, Mary, and two of their three children. His eldest son also works full-time at the Open Door.

It is difficult to find a more dedicated and passionate representative of Victoria’s marginalized residents than Rev. Allen Tysick. As spiritual leader of the Open Door street ministry, Rev. Tysick tends to the physical, emotional and spiritual needs of more than 600 street people.

For the past 15 years Rev. Tysick has dedicated himself daily to the people who rely on his services. At the same time he has worked tirelessly to find the resources to improve the lives of people at risk. Rev. Tysick and his flock recently reaped the rewards of seven years of planning and fundraising for a new facility when $10 million in government funding was announced for a new building now under construction on Pandora Street. When it opens next fall, the facility will provide 45 transitional housing units, meal service for residents and the homeless, a drop-in centre, and transitional services.

Rev. Tysick gives a voice to the people who society often misunderstands and ignores. He is a true humanitarian who believes that all people, regardless of their personal circumstances, should be treated with dignity and respect. These values were recognized by Time Magazine this summer in its third annual list of Canada’s Heroes – people who have made a difference to their communities and their country.

In keeping with our university’s vision of building healthy communities through enlightened leadership, Royal Roads takes great pleasure in conferring the Chancellor’s Community Recognition Award on Rev. Allen Tysick for his outstanding service to our community.