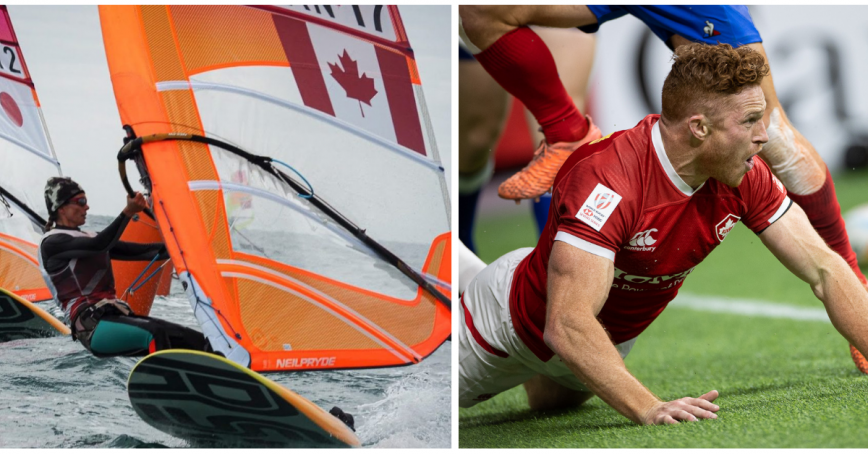 It’s her fifth Olympics, his first.

She’s a solo performer, alone with the waves, the wind, the competition.

He’s part of a team, shoulder to shoulder — literally — against a rushing, rolling tide of international opponents.

They’re Royal Roads University alumni, competing in the 2020 Tokyo Olympics, and these are their stories: 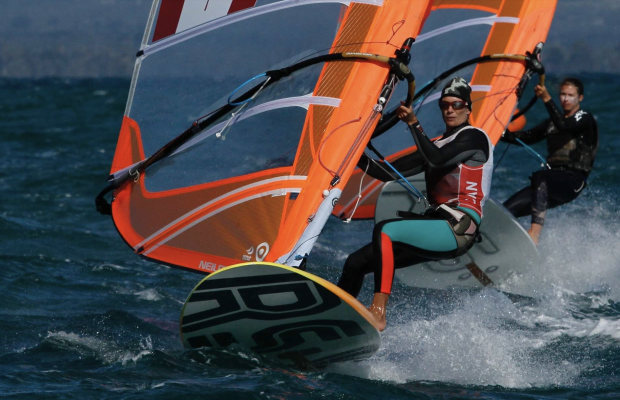 The best thing for Nikola Girke’s sailing, it turns out, was to stop sailing.

She’d debuted for Canada at the 2004 Athens Olympics in the two-person dinghy, then switched to windsurfing for Beijing in 2008 and London in 2012, when she finished 10th despite battling equipment issues. But after competing on a sailboat in the mixed multihull category at the 2016 Rio Olympics, the West Vancouver, BC resident retired.

After years of elite-level training and competition, what did she do with her time?

She ran, worked out at the gym, cross-country skied, waterskied, wake-surfed and rode her bike to work, 45 minutes each way. She even did a little sailing and windsurfing — for pleasure.

“Regular, fun kind of things that you do when you’re not training all the time,” she says. “I had to relearn how to enjoy sport for fun, not just for training.”

Girke did one other thing: a major garden project at her home that involved shovelling 20 truckloads of sand, pushing wheelbarrow after wheelbarrow of it from front yard to back, tamping it, along with many other arduous tasks.

“It was a very extensive project where I got good calluses on my hands, which are super important for windsurfing. I got very strong again, I was in really good shape,” says the 43-year-old. “And that was around the time when the [Canadian Olympic Team] opportunity presented itself. And I was like, ‘Well, I am in good shape, why wouldn’t I try?’”

And while the COVID-19 pandemic delayed the 2020 Tokyo Games to 2021, it changed her preparations, too. She ran more than she ever had before, lifted weights and worked out at home, both inside and outside, in her spiffy new yard — and she did it all solo, except when her husband joined her.

All of that requires that an athlete generate an enormous amount of motivation and Girke, who has been competing since she was 12 and will be the first Canadian female sailor to race in five Olympic Games, is no stranger to doing that for herself, or others. In fact, she has her own business as an executive coach after earning a Graduate Certificate in Executive Coaching from Royal Roads.

Its name? Own Your Podium.

She isn’t setting any specific podium placement targets for herself in Japan — “My goal for Tokyo is to enjoy the process, have fun, do my best” — but she is aiming to use her veteran status and experience to help other Canadian sailors competing in their first Olympics get the most out of themselves and the experience. 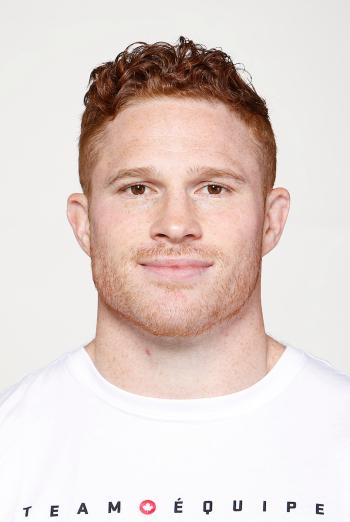 Like Girke, Connor Braid began competing in his sport at the age of 12. And in Braid’s case, stepping on to the rugby pitch was almost inevitable because, while playing soccer and basketball, he was a little too physical for those sports.

The Victoria, BC resident found the right game, earning spots on regional, provincial and national youth teams. He went on to compete on the Canadian Rugby Union senior 15s team from 2010 to 2018, collecting 26 caps and 43 career points. In 2015, he competed in the World Cup — but only briefly as he suffered a shattered jaw 90 seconds into the game. That injury would keep him out of his sport for a year and require surgery to have three titanium plates inserted.

He joined Sevens Series play in 2017 — including competing in the hugely popular Canada Sevens tournaments in Vancouver — and even played professionally in the U.K. from 2012 to 2017, finishing his pro career with the Worcester Warriors of the English Premiership.

While there, he completed his Bachelor of Commerce at Royal Roads, putting the same hard work into his studies that he’d long expended on rugby, spending time on his laptop in coffee shops around Europe, studying between games and training. He has put that education to good use as managing broker of William Wright Commercial Real Estate Services in Victoria.

But while Braid has frequently competed internationally, including in world championships and even the Commonwealth Games, Tokyo will be the 30-year-old’s first Olympic Games.

“It’s kind of surreal. It’s starting to sink in,” he says. “It’s the culmination of a dream and a tonne of work. And within that, setbacks and scares, and postponement… selection worries, performance issues, everything.

At the same time, he was thinking about hardworking friends and teammates who wouldn’t be travelling to Tokyo.

And when he’s there, he says he’ll have two people on his mind.

Before every game, he writes “COLE” on his left wrist, something he has been doing ever since his younger brother was diagnosed with cancer at the age of 17 while Braid was playing far away in Wales. He took strength and motivation from his brother’s strength and toughness during the three-and-a-half years of chemotherapy and radiation, and even now that Cole is cancer-free and about to attend university.

And at every game, Braid also wears a shirt under his jersey adorned with “D. JONES 9,” for a friend from high school, Dylan Jones — “a freak athlete, such a good athlete in all sports” — who was diagnosed with lymphoma in 2014 and died three years later.

“I just wanted to keep his name in lights and commemorate him,” Braid says, noting, “I haven’t played a game since Dyl passed away without one shirt or another… with his initials or his name.

“It’s part of my routine. I put it on before we run out and just kind of think what I’m grateful for, and think of him, think of Cole… and run out with them with me.”

Windsurfing competition at the Tokyo Olympics will take place between July 25 and 31 at Enoshima Yacht Harbour, about 90 minutes south of Tokyo. Rugby Sevens Olympic play will take place from July 26 to 31 in Tokyo; 12 men’s teams and 12 women’s teams will vie for gold in their respective categories. Check your local TV listings and websites to find out when you can watch Nikola Girke and Connor Braid compete.

Another to watch: Kayaker Haley Daniels, a Bachelor of Commerce student at RRU, will be competing in her first Olympics. Royal Roads News will speak to Haley after her competition. Stay tuned!