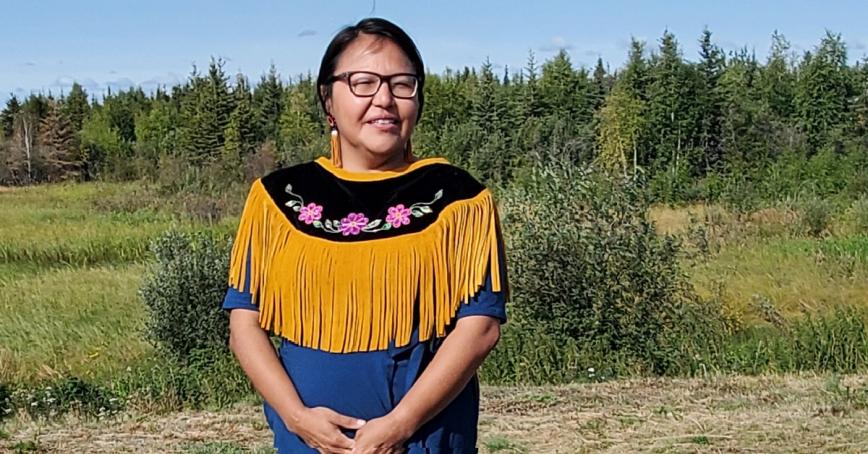 “There are no industry standards for me to follow. There's no guide for me to adopt. I'm going to be taking on a design thinking approach to this leadership and use a lot of innovative types of ideas to transform the whole organization and how things are done. Just because things were done a certain way that doesn't mean that's the only way. I really want to take an approach of collaboration and be open and transparent.”

These words were spoken by Chief-elect Doreen Arrowmaker who was recently voted in as Chief in Gamètì, Northwest Territories. Arrowmaker is a graduate of the Master of Global Management program and the first female Chief in her community. Following her election, she reflected on her time at Royal Roads and what it meant to her in her leadership journey as she pursued this role.

“Royal Roads holds a very special place in my heart because I learned who I am as a person, the confidence that the learning style had given me, it forced me to think outside the box, and yet within the box to innovate. It has given me an opportunity to develop my critical thinking, and just gave me a whole whack of confidence. It just holds a special place because that's where I found myself,” she says.

That spirit of innovation drives her leadership and she’s determined to do things differently in her community.

“I think it's exciting to come into this with a different set of eyes, and a different type of an approach to the challenges and the issues we have here at the community level and at the regional level, and to bring in a more strategic approach to doing things,” she says.

While she feels prepared, she knows she's going to be facing a challenge and she’s faced her share of difficulties along the way.

“Coming in, especially being an ambitious woman trying to put my foot in the door of a patriarchal system, it's hard and there's so many challenges and there are so many raw moments that will come up, but you have to persevere.”

Anybody that's considering a higher education should pursue it, she says.

Her determination that helped get her elected was something that also set her apart in her studies. Associate Professor and MGM Program Head Hassan Wafai, reflected on his time teaching Arrowmaker and shared his impressions of her as a student and a leader.

“Doreen was very ambitious. She was able to really create a space for herself in the cohort, impact her peers and also learn from them. That was remarkable,” he says.

He also spoke to her spirit of collaboration and willingness to participate in a free exchange of ideas.

“As an Indigenous woman, her knowledge was very reflective and she shared her knowledge as something that everyone could learn. Doreen is a very good team player and ambitious learner. I am proud of her academic achievement. Her relationships with her supervisors and instructors were great. She earned our respect as well as the respect of her peers.”

Given she’s been elected to represent her community, it would be fair to say she earned their respect as well. Daring to dream she could rise to a role no woman had occupied before her, Chief-elect Doreen Arrowmaker is blazing a trail for the women of Gamètì, Northwest Territories. She found herself in her studies at Royal Roads and now she finds herself leading her community with pride.

As part of The Tomorrow Makers campaign for Indigenous student success and research grants, we’re sharing stories of Indigenous alumni who are making a difference in the world. You can help future Indigenous leaders tackle climate change, sustainability and community development for this generation and for those to come. You can be a Tomorrow Maker by supporting one today.