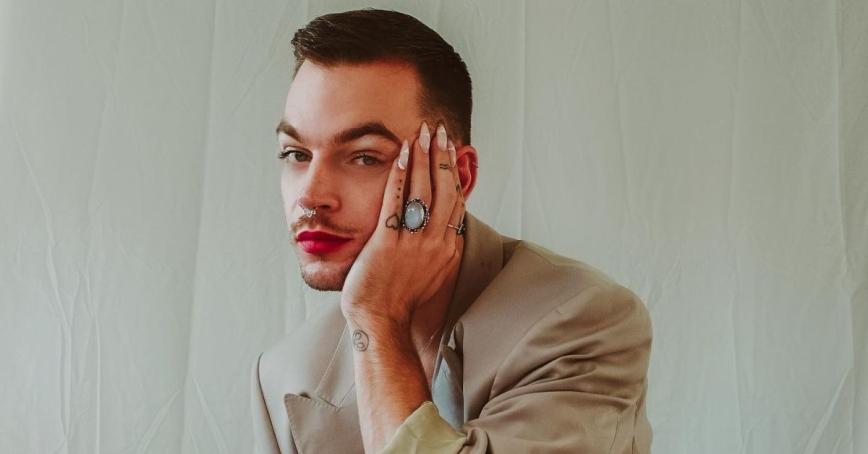 COVID derailed Jan van Vianen’s plan to save for his RRU Bachelor of Arts Professional Communication (BAPC) education. A Royal Roads Entrance Award put him back on track.

Jan van Vianen does freelance fashion production and content creation, producing photo shoots and ad campaigns. He helps businesses such as boutiques with social media. And he’s an advocate for LGBTQ+ people, including refugees from countries where gay people are not accepted and may even be persecuted.

And when he was preparing to start the Bachelor of Arts in Professional Communication program at Royal Roads University in the first year of the pandemic, he was doing something else: wondering how he would pay for his schooling.

Van Vianen, who grew up in Prince Rupert, B.C. and has lived in Victoria for five years, had been going to school part-time at Camosun College and working full-time as a restaurant server. He was counting on that income to pay for his RRU education when COVID-19 hit the hospitality industry like a tidal wave in 2020.

What saved the day when he was off work for several months was a Royal Roads Entrance Award.

Unable to save up to avoid having to take out a student loan, “The RRU Entrance Award really helped me realize that dream [of going to school],” van Vianen says.

“I see it as…it’s giving that little gay kid a chance to fulfill their dreams. It gives that person who comes from a low-income family a chance to better their lives,” he says.

Royal Roads’ Entrance Awards help bring diversity of mind and culture to the university’s cohort learning model – often setting students up for further financial aid through in-course and convocation awards. Entrance Award funding often makes all the difference between learners being able to study at Royal Roads or never realizing their educational goal.

After winning that award — and another, the RRU Founders’ Award, upon graduating — he is pursuing a career in public relations for the fashion industry. And he’s continuing his advocacy for the LGBTQ+ community, noting Royal Roads’ commitment to diversity and inclusion drew him to the university.

“As a queer advocate and a member of the LGBTQ+ community myself, I felt like Royal Roads made it important to have a whole bunch of different people come together,” van Vianen says.

Indeed, he wrote in his Entrance Award application letter: “Being gay and growing up in a small town, I experienced feelings of isolation, misunderstandings and exclusion. Those experiences remind me how imperative it is to create inclusive environments and recognize how diversity connects us as individuals.”

Van Vianen says he believes working with people among his BAPC cohort with diverse backgrounds and experiences prepared him for his career, which similarly involves collaborating across interests and perspectives.

Another benefit of his Royal Roads experience: “Discovering I was a lot smarter than I gave myself credit for.”

Noting he was a theatre kid, not an academic, in high school, he says the prospect of pursuing a BA was intimidating. But at RRU, where he was able to mine his own experiences and interests for writing assignments, “It just felt right when I went back to school.”

And he would like potential donors to Royal Roads to know that it couldn’t have happened without his Entrance Award.

“In this economy, financial aid is such a huge help for people like me who don’t have rich parents or all the savings in the world. This financial assistance really gave me an opportunity to go get an education.”