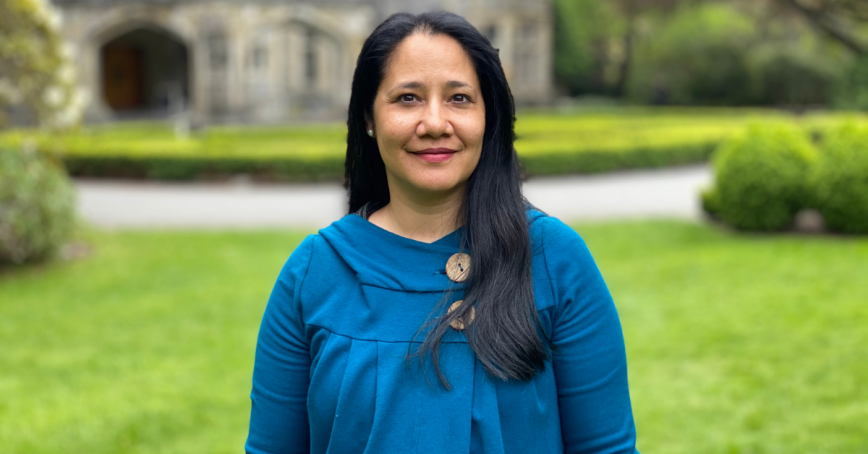 She is the daughter of Filipino and Indian parents, grew up in Edmonton, India, the Philippines and France, earned an undergrad degree in Utah, and has spent time working with NGOs such as Doctors Without Borders in places as varied as Afghanistan, Bangladesh, Colombia and the Democratic Republic of Congo.

It should be no surprise, then, that Athena Madan, an assistant professor in Royal Roads University’s School of Humanitarian Studies, says she believes her strength as a teacher is in the variety of voices and perspectives she brings into her classroom.

For that and other qualities, Madan was honoured this fall with RRU’s Kelly Outstanding Teaching Award. The Kelly awards recognize teachers who promote Royal Roads' learner-centred philosophy and make positive contributions to teaching excellence.

A student’s blurb from her award nomination calls her “knowledgeable, yet humble and personable” and says, “She is in tune with students’ needs and [uses] outside-the-box methods to achieve traditional learning outcomes” that provoke in students “epiphanies of self-reflection/growth.”

“I value motivating social change,” Madan says in her statement of teaching philosophy. “So, I seek to connect hearts, in addition to informing minds. My goal is that students leave my classes with an eye to global citizenship and increasing social justice in their communities.”

In an interview, she puts it more simply: “I hope that students get, beyond the learning objectives… a sense of somebody else’s story and empathize with it.

“What motivated me, in part, is my own parents’ story, wanting to realize a world worthy of their dreams.”

Their story is a common one for immigrants who want to give their family a good life in a new country but often feel the pull of their homeland. Thus, Madan’s family includes four citizenships, 10 languages, three faiths and seven siblings.

It was that background that contributed to her travels as an aid worker.

She brings all those stops around the globe — and all the stories and photos they produced — into the classroom, which, in the case of the course for which she received the Kelly Award, was a course called Indigenous Perspectives on Humanitarianism.

After earning a PhD in Social Justice Education and Public Health from University of Toronto’s Dalla Lana School of Public Health and post-doctoral degrees in Global Mental Health and the Social Aetiology of Mental Illness from U of T’s Faculty of Medicine, she also brings that Utah undergrad degree from Brigham Young University — in theatre design, of all things.

From that course of study, she learned that in a theatre production, there are, on average, eight people working behind the scenes for every one person on stage, in the spotlight, emphasizing the importance of working as part of a team.

Now that the spotlight is on her with the Kelly Outstanding Teaching Award, she notes that many members of the RRU teaching team are deserving of recognition for their working aiding hers.

A colleague who also nominated her for the award, Olaolu Adeleye, an associate faculty member in RRU’s School of Communication and Culture, reflects that back on her, saying she’s worthy of the honour for her commitment to her students, her work to allow them to engage with course content and one another at a personal level, and her empowering approach to teaching.

“I think when we think about the modern educator, we need to think about those who are able to operate in a trans-disciplinary context,” he says, noting Madan weaves her health background into her teaching because health affects so many aspects of people’s lives.

For her part, in explaining her approach, Madan points to the university’s key principles around equity, diversity and inclusion: “caring, creativity, courage and community based.”

“If we are to echo the Royal Roads values,” she says, “I try to make the classes caring and I try to make class work creative so that students can be courageous in encountering their own communities.”

Earlier this year, Madan was named the 2021 Early in Career Award recipient by the Confederation of University Faculty Associations of British Columbia. She is also the recipient of the 2018 Untold Stories Global Health Award and was a nominee for the 2021 Global Health Lancet Award.

The Kelly Outstanding Teaching Awards were created in recognition of Dr. Gerald O. Kelly, the first installed president of Royal Roads University, through an endowment fund. A teacher, Kelly believed universities should be built around the learner. With students top of mind, he encouraged Royal Roads instructors to strive for excellence in teaching. Each spring, the call for nominations opens and is publicized throughout the university community. An awards committee selects the winners.