Board of Governors Convocation Indigenous 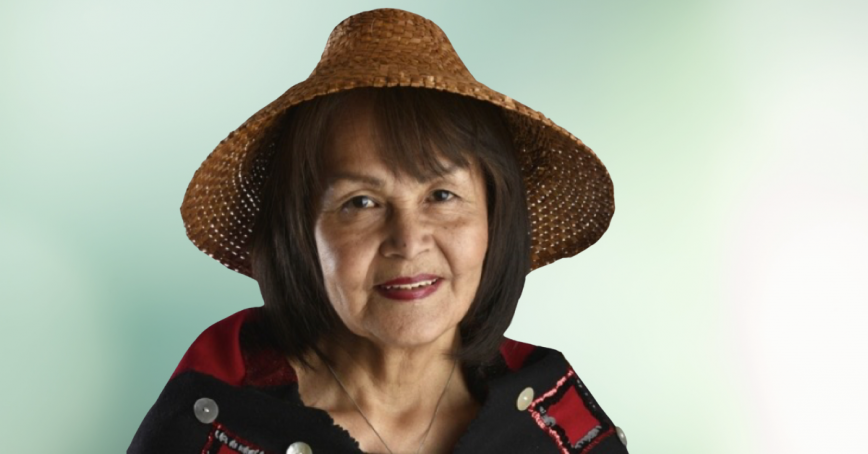 For five decades, Lillian Howard was on the frontlines of advocacy for Indigenous people in BC and Canada. Lillian's years of work and unwavering dedication will be recognized with an Honorary Doctor of Laws from Royal Roads University, during the 2021 fall convocation ceremony Nov. 19, 2021.

Sadly, Lillian passed away Oct. 30, 2021. The honorary degree became official before her passing. There is comfort in knowing Lillian and her family could share in the knowledge of the special place Lillian always holds within the Royal Roads family. Her words, actions and fearless determination will live on and inspire others to follow in her footsteps.

Hailing from the Yuquot Village, "the place where the winds blow from all directions," a member of the Mowachaht/Muchalaht First Nation of Nuu-chah-nulth, Kwakwaka'wakw and Tlingit ancestry, Lillian attended RRU in her fifties, earning a Master of Arts in Environmental Education as part of the second-ever cohort of that program. But she had been a social and environmental advocate since the 1970s when she was involved in the McKenzie Valley Pipeline Inquiry.

And for her interest in environment, education and community service, she gave credit to her family.

"The elders were wonderful teachers," Lillian wrote in her 2007 thesis. "My great-grandmother had a keen interest in what was happening on land and environment. She believed in appreciating our roots and staying connected to the land.

Indeed, the 1980s saw her work with the Union of BC Indian Chiefs on a campaign to gain support for Indigenous rights, then become involved with treaty processes for several First Nations, including as co-chief negotiator for the Nuu-chah-nulth Framework Agreement.

Her work continued through the ensuing decades, always focused on the environment and representing Indigenous interests, while uplifting Indigenous lives.

Lillian wrote that she attended the Christie and Mission Indian Residential Schools, noting: "Attending the Residential School had a traumatic effect on me. I learned to cry silently. For the longest time, I felt deeply saddened about losing the ability to speak my Mowachaht language. I have accepted that dealing with issues arising from the institution is a lifelong healing journey."

Lillian was a survivor and learned to build strength from her challenges. In the last decade, the mother, grandmother and great-grandmother continued her work helping others. In 2019, she modelled for Vancouver Indigenous Fashion Week; and in 2021, she was a speaker at Genome BC's annual genomics forum alongside doctors Bonnie Henry and Anthony Fauci, and was conference Elder at the Indigenomics Institute's Indigenomics by Design 2021 Conference.

Lillian also shared her time as an advisor for Indigenous Health – Provincial Health Services Authority and provided support services for Indigenous women and families at the BC Women's Hospital, and was a board member of EAGLE, or Environmental Aboriginal Guardianship through Law and Education.

ReMatriate, a Canadian Indigenous women's collective that uses social media to connect Indigenous peoples, particularly women, through art, showcased and recognized Lillian with a feature of her, for her tireless efforts and dedication as a matriarch to uplift society.

Lillian was a volunteer at the Aboriginal Front Door Society in Vancouver's Downtown Eastside community and was recognized as an Indigenous woman leader by the University Women's Club of Vancouver for her work on Canada 150+ as co-chair of the City of Vancouver's Urban Aboriginal Advisory Committee.

Lillian Howard, you will be missed, yet your lifetime of actions has sown and nurtured strong roots across the country. Your contributions – to justice, health, environment and reconciliation – will be remembered and will go on to empower and awaken minds to Indigenous peoples' rights long into the future.