Bachelor of Arts in Justice Studies 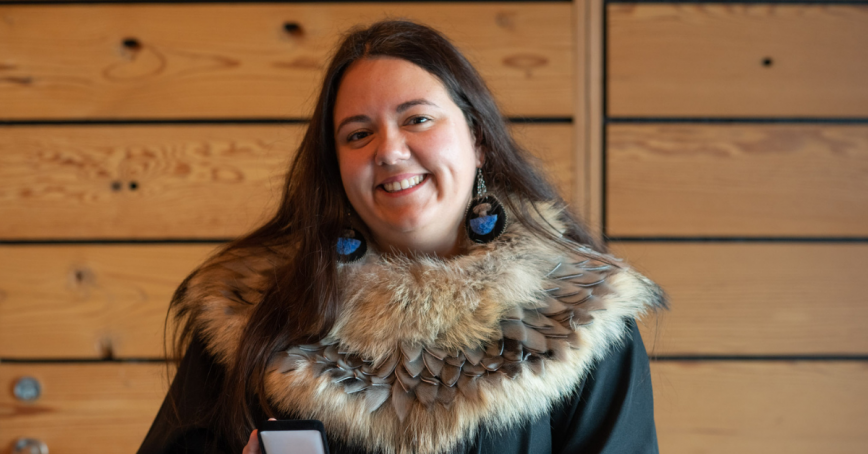 Katelynne Herchak wants to write a book, go into politics, teach. She wants to tell stories, learn lessons, lift others up.

If you look at her past — a past already filled with action, experience and advocacy at only 26 years old — you’ll have little doubt she will achieve a varied and impactful future.

After earning an Indigenous Family Support Worker certificate and serving as a student policy advisor at Camosun College, serving on the City of Victoria youth council, and working as a community engagement co-ordinator with Reconciliation Canada, Herchak’s latest accomplishment is earning a Bachelor of Arts in Justice Studies at Royal Roads University.

At RRU’s fall convocation, she is being awarded the Lieutenant Governor's Medal for Inclusion, Democracy and Reconciliation, which is given to a student in recognition outstanding contributions in support of inclusion, democracy or reconciliation, on or off campus.

The Victoria-raised daughter of an Inuk dad — a ’60s Scoop survivor — with family in Kuujjuaq, Que. and Rankin Inlet, Nunavut, and a mother whose ancestry is Viking and Celtic, Herchak says she’s part of a large extended family.

“That’s what drives me,” she says. “There’s a level of expectation in my family that you do well. And whatever that means, to ‘do well’, is up to you, as long as you somehow contribute to community. I’m very thankful to have had that instilled in me.”

At Royal Roads, which she attended while also working with Reconciliation Canada, she turned her family’s expectations into actions by inviting Indigenous speakers, including Chief Dr. Robert Joseph, the ambassador for Reconciliation Canada and a member of the National Assembly of First Nations Elders Council, to speak to her classmates about colonization and reconciliation in the Canadian criminal justice and prison systems.

“It was really beautiful and it was really exciting to me because I saw there were not a lot of folks in the program that had the same level of privilege that I do, of getting to work with elders and community…and providing that opportunity for them to see things in a different way,” she says.

“How can we make this better? That’s always the framework that I work from.”

Now, she adds to that framework the desire to learn and share learning.

While she’s pondering going into education — and, down the road perhaps, politics — her next step is more school. She has enrolled in a Master of Arts in Geography program to study Indigenous knowledge and governance over land and water.

Her MA research will focus on youth and how they’re maintaining cultural integrity when they move away from home or how they’re contributing to traditional livelihoods if they stay home. That research will take her to Tanzania, and she will take with her knowledge keepers from Carcross/Tagish First Nation in Yukon, to meet with their Maasai counterparts for an Indigenous knowledge exchange.

Her role: “I’m going to sit and listen and learn and love the process.”

• In addition to her studies and volunteer work, Katelynne Herchak co-hosts a podcast with one of her roommates, Madeleine Begin, who is Mi’kmaw from Nova Scotia. It’s called Spilling Labrador Tea Under Cedar Trees and it’s described as “just two Indigenous girls tryna make it in an Urban world. Join us in discussing who we are, how we got here and everything between.”