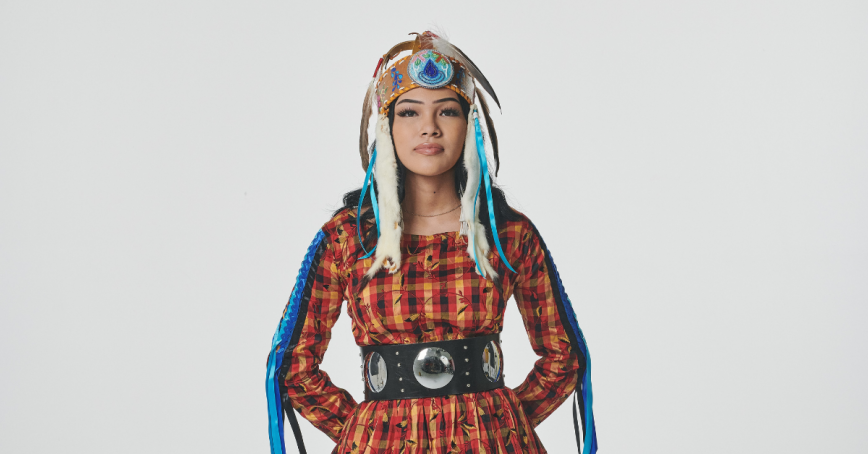 Part of the commitment Royal Roads has made to Reconciliation is working together as Indigenous Peoples, descendants of immigrants, and immigrants to create a new shared future.

Autumn Peltier is someone who exemplifies this spirit of working together to create change through her work drawing attention to the ongoing water crisis in Indigenous communities across Canada and the environmental and systemic racism her people face.

This year, Peltier is being recognized by Royal Roads University with a Doctor of Laws, honoris causa, this Spring 2022 Convocation for her commitment to creating a better future.

Peltier is the Chief Water Commissioner for the Anishinabek Nation and environmental advocate whose journey for justice has made waves with her courage. Born in 2004, she was raised in Wikwemikong on Manitoulin Island. At a young age, her Great Aunt Josephine-Ba inspired her to continue her life’s work in protecting the water, work she continues today.

It’s a message she’s been raising since she was just eight years old, following in the footsteps of her Aunt Josephine Mandamin, who was known as “Grandmother Water Walker.” Peltier didn’t let her age hold her back from speaking truth to power and raising awareness about issues facing Indigenous people today. She feels it’s what makes her message even more compelling.

“I've always believed that when a message comes from youth, it's so much more powerful and so much stronger because generally, you wouldn't think a young person would stand up and use their voice or speak up about world issues or political issues,” Peltier shares. "That's why I feel it's so important when a youth speaks up because we shouldn't have to be speaking up about these things. We shouldn't have to be worrying about world issues or political issues. Young people should be able to be young people."

She comes to this work with a cultural perspective on the importance of water, how we think about it and how we treat it.

“In our culture, we look at water as a living being, and we're taught to respect it as if it's a human. It's the lifeblood of Mother Earth. Water gives all life. We all live in water for nine months. It's the only reason we're here. Without water, there's no life,” she explains.

Peltier captivated the world’s attention at the age of 12 when she admonished Prime Minister Justin Trudeau at an Assembly of First Nations event for his choices for her people. He promised her, “I will protect the water,” and it’s a promise she continues to hold him to. Before the event, organizers asked her not to speak to him, but she was brave and said what was on her heart.

At thirteen, Peltier spoke out about water protection to world leaders at the UN General Assembly and received the Sovereign Medal of Exceptional Volunteerism by the Governor-General of Canada and Lieutenant Governor of Ontario. In 2018 and 2019, she was invited to speak at the United Nations Secretary-General's Climate Action Summit in New York, and she was nominated for the International Children's Peace Prize 3 times.

Last year, Peltier’s movie, “The Water Walker” documentary produced by Indigenous content group Seeing Red Six Nations, was released on HBO Canada. Last year also brought many awards: the “Global Water Activist Award” from the Prince of Monaco, Prince Albert the 2nd, the RevolutionHer Community Vision Youth Award, and features in publications like MacLean’s as part of the 50 most potent Canadians in history.

So far this year, outside speaking at many events, Peltier has joined the Indigenous committee for the Toronto Raptors, is launching a feature Indigenous partnership with Apple Canada and is grateful to share her recognition for the Daniel G Hill Human Rights Award from the Ontario Human Rights Commission.

Her powerful words have been heard at the World Economic Forum, the Children's Climate Conference in Sweden, and the United Nations Secretary-General’s Climate Action Summit in New York.

Royal Roads is excited to welcome and honour her too. Joining Convocation is another memorable experience she considers part of her extraordinary advocacy journey.

“It's an excellent feeling for me,” says Peltier. "I get these excellent feelings of success and accomplishment in terms of my work when speaking at the United Nations or speaking at the World Economic Forum or being noticed by people like the Prince of Monaco. [The honorary degree] is on the same level of that feeling because I feel like I've accomplished a lot within my work, which makes me thrilled knowing that my voice is heard.

As a youth advocate who has seen how she has flourished with the mentorship of her mother and great-aunt Josephine, Peltier has a special message about how adults can be a part of nurturing budding activists.

“I feel like not only adults, but teachers and the education system have to empower [youth speaking up] and mentor that. Speaking up and using your voice is very important, something I feel like should be taught.”

Royal Roads looks forward to welcoming Autumn Peltier and her family to the university community and applauds her commitment to making the world a better place.