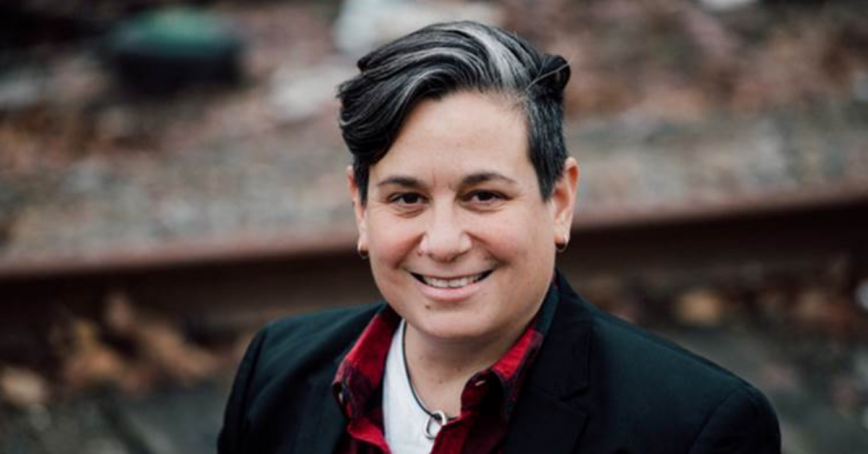 But for gender non-conforming lesbians/queers, the workplace can be the worst of both worlds.

That’s the core of Michelle Hamilton-Page’s research for her Doctor of Social Sciences (DSocSci) at Royal Roads University — and it’s a subject that hits close to home, too, for the self-described “butch” lesbian. It wasn’t her personal story, however, but a gap in research literature, that prompted her DSocSci project.

It’s other people’s stories that tell the tale in her project, titled “Unbound Leadership: How Gender Non-conforming or Non-binary Lesbians Navigate the Workplace from a Place of Visibility.” Hamilton-Page interviewed 25 non-binary lesbians for her dissertation to investigate their experiences in their work lives.

“My work focuses on gender non-conforming lesbians… whose visibility makes ‘passing’ as heterosexual difficult, often impossible, exposing them to further risk as the intersection of their gender identity and sexual orientation places them in the crosshairs of misogyny and homophobia,” Hamilton-Page writes on her research website.

“The thing that I was interrogating was this experience in the workplace of what it is to look like and present physically like a woman,” she says. “We look like women in a heteronormative workplace, we experience misogyny. And as soon as we’re out or we’re signalling we’re not heterosexual, there’s a repulsion, there’s a thing that happens there.”

For most of her interview subjects, among the things that happened in their workplace ranged from lack of mentorship from leaders, limited opportunities for advancement and sometimes outright hostility in the form of targeted dress codes to sexual harassment and even sexual assault.

“We know behaviour changes because laws or policies change — like drinking and driving and wearing a seatbelt,” Hamilton-Page says. “So, policies help, laws help, but 23 of 25 people will tell you even when those policies were in place… there are still experiences of harassment and discrimination that are happening.”

For instance, her interview subjects reflected her own experiences, that gender non-conforming lesbians hit professional ceilings that their more feminine-presenting colleagues did not.

That’s why her research focuses on the leadership — “Unbound Leadership,” as her dissertation calls it — and the power that people in senior positions possess to make better, more inclusive workplaces.

And leadership often comes from those who’ve experienced less-than-welcoming workplaces. Hamilton-Page says she heard “23 out of 25 people talk about harassment and discrimination, and yet each one of them talks about their concern for their coworkers in terms of figuring this stuff out.”

“We know as Canadians, the workplace is better when there’s more diverse leadership,” says Hamilton-Page, who has worked extensively in public health.

Reflecting on her own experiences, she adds: “I loved managing because it’s not about power, right, it’s about what are your goals, what do you want to do, what are you great at?”

Michelle Hamilton-Page, who has lived in Victoria the past four years but, grew up and spent most of her life in Ontario, presented her paper last month at the International Conference on Advanced Research in Social Sciences in Oxford, UK. As well, as part of her DSocSci research and knowledge outreach, she filmed a TEDx-style video and recorded podcasts, available on her project website.