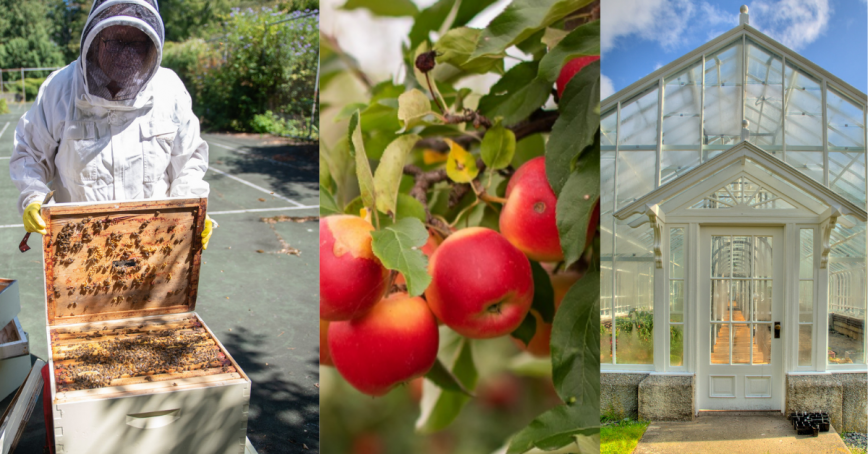 Growing food in a garden is about the future. It’s a hopeful act to dig a hole, place a seed or plant, cover it with soil, water and fertilize it, then wait for it to sprout — then grow! — to produce something fresh and flavourful for the kitchen table.

Growing food in a garden is also about the past: what nutrients remain in the soil, what plants thrived there previously (or didn’t), what grew on a plot years or decades before today’s gardener arrived — and who grew it.

On the Royal Roads University campus — a National Historic Site — the 5.26 acre kitchen garden is a place where past and future meet.

“Today, the university appreciates learning from Xwsepsum, Lekwungen, and the surrounding nations and their members, who continue to share their stories about harvesting from the lands and waters,” says Asma-na-hi Antoine, RRU’s director of Indigenous Engagement. “This relationship is important to continue with the kitchen garden project to honour their stories and revitalize their traditions.”

Surrounded by a wall that, like nearby Hatley Castle, dates back a century, the kitchen garden produced food for James Dunsmuir and his family.

And this year, the kitchen garden is the foundation of Royal Roads’ Vision in Bloom, a fundraising campaign to restore and maintain the university’s historic gardens and related facilities.

“By reimagining what was once the Dunsmuirs’ kitchen garden to become a community food-production hub, we are creating an edible landscape,” says Royal Roads President and Vice-Chancellor Philip Steenkamp. “We are converting an underused 5.26 acreage into a garden that will produce an abundance of organic vegetables, fruit, honey and herbs for use on campus and throughout our community.”

Community is the key for the project, as it is Royal Roads’ students and staff as well as the larger community of which it’s a part that will benefit from the garden.

“Our vision for food production is grounded in principles of planting carefully, never taking more than we need and sharing what we harvest,” Steenkamp says. “The kitchen garden will support learning and research by students and the community and provide an abundance of organic produce we can share with the community.”

“It’s just ripe for food growing,” Solara Goldwynn says of the walled garden, adding that the first stage for 2022 is a “Giving Garden” that, in addition to vegetables and perennial plants, will eventually feature more fruit trees as well as an Indigenous food and medicine garden.

Goldwynn, the food systems manager of the RRU kitchen garden, says following that, the larger food-production garden will ramp up, and she notes the key is using a diversity of plant species to remain resilient with the challenges of climate change, starting with a foundation of healthy soil.

“What excites me is the potential for a historic restoration that can also be quite forward-looking,” Emma Lansdowne, a gardener at Royal Roads, said last year during the first phase of Vision in Bloom.

“The potential is huge just because the land and the infrastructure were set up for food production,” she said. “The site itself is beautiful, the soil is lovely, and where it is situated is good in terms of climate and sun exposure.”

Beyond the beauty of the site and its potential sits an indelible piece of its past that pre-dates the Dunsmuir family building an estate that would go on to become a military college and then a public university.

The garden and the estate it supported were all about colonization, about settlers taking over land that is home to Indigenous peoples. The updated kitchen garden aims to decolonize the space, creating a garden that recognizes and celebrates the diverse cultures and histories of the peoples who live on these lands.

“We want to work really intimately with the landscape, to learn from it, to uphold the existing Indigenous food systems,” says Hilary Leighton, co-chair of the Kitchen Garden Committee, associate professor and program head in RRU’s School of Environment and Sustainability.

“It’s not necessarily big farming or just a garden,” she says. “It just means we can really work with what already exists and has been there for millennia, and also cultivate these lands into an edible landscape.”

Also important is acknowledgement of the role of Chinese workers in the development of the garden and the entire estate.

More than 120 Chinese gardeners, farmers, and cooks lived and worked at Hatley Park in 1911, supporting the property’s development into the 1930s. Many were part of a wave of Chinese immigrants that came to Canada between 1885 and the early 1900s, attracted by the gold rush, while others worked on the Canadian Pacific Railway. They had to pay a government-mandated “head tax” ranging from $50 to $500 while working 60-to 80-hour weeks earning 15 to 20 cents an hour.

That’s why Royal Roads intends to honour the past in restoring its historic grounds with the kitchen garden setting a tone — and a table — for the future.

There’s work to be done — and you can help

In addition to revitalizing the walled food garden at Royal Roads, Vision in Bloom also includes plans to update the lush Japanese Gardens, which boast unique plantings, an iconic water wheel and serene surroundings — and, thanks to a recent donation by RRU community members, 125 bonsai trees.

Other projects in the works as part of Vision in Bloom:

Thanks to generous donors, Vision in Bloom raised $160,000 in its first year, 2021. Those donations helped hire a Food Systems Manger to create the garden design and manage all start-up activity, including coordinating the work of the project guiding committee and prepared the ground for planting. The university also restored the iconic water wheel and reinstallation of two Japanese crane sculptures and placed several commemorative benches. The funding also supported the creation of the new Japanese Gardens design that will be implemented over the next 3-5 years. As well, an apiary expansion was funded, with a move to two hives from one.

This year, the university hopes to raise an additional $250,000 to continue the work and begin several large multi-year projects, including significant expansion to the Japanese Gardens and restoration of the Glass House, an original greenhouse from the Dunsmuir era that has been in continuous use for more than 100 years. There are many ways to support A Vision in Bloom. For more information, visit RRUinBloom.ca.