CFL Players’ Association teams up with RRU for sport leadership 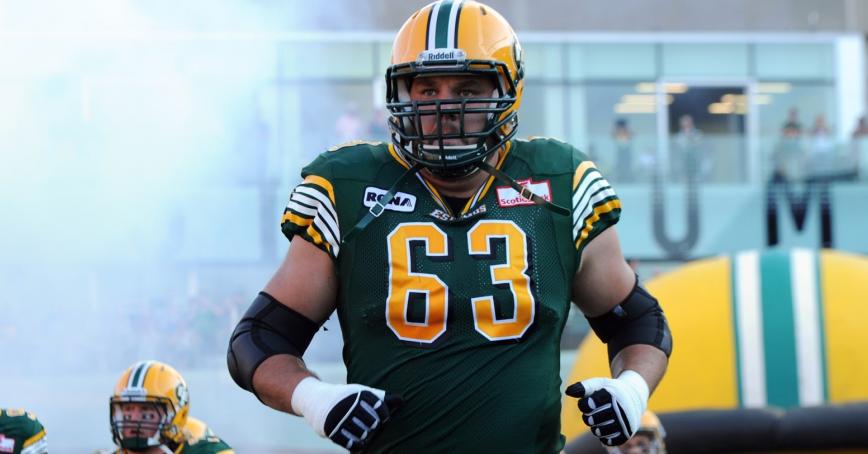 Being a professional athlete requires commitment.

Take, as an example, Canadian Football League (CFL) players. They commit body, mind and spirit year-round to be ready for a punishing five-month season.

They pump iron, run wind sprints, practise footwork, techniques and schemes; they scrimmage, study scouting film and memorize a complex playbook. They do this for four or five or 10 years.

The “what” — life after football — also takes commitment, and it’s where the CFL Players’ Association (CFLPA) comes in. The association helps players find success throughout and after their football careers.

And now, the CFLPA and Royal Roads University are teaming up to add to the lessons learned on the gridiron, to prepare current CFL players for lives and careers after they’ve left behind sweaty locker rooms, ice baths and taped fingers.

CFLPA has worked with RRU’s Professional and Continuing Studies to create a course in sport leadership designed for the athletes it represents (the course starts in April).

The program, says Brian Ramsay, the association’s executive director, is an extension of the CFLPA Academy, which aims to prepare players and their families for life after football. Education is a pillar of the academy’s work.

“We’re confident programs such as this are going to assist our members and others in really translating those skills that they’ve developed into their next careers,” says Ramsay, who was an offensive lineman from 2006 to 2015 with three CFL teams and worked in the off-season as an accountant with KPMG. (He's number 63 in the photo above.)

Sport leadership, and leadership in general, is a natural area of study for CFLPA members because sport presents opportunity to develop such skills, Ramsay says.

“In the toughest environments, there’s always an opportunity for leadership to be developed. And one of the strongest traits of a leader is being able to work within that team environment,” he says.

RRU was a natural fit for the program because of its focus on leadership development and maybe a little, Ramsay says, because he earned his MBA there and is familiar with its programs and approach.

A perfect fit, he notes, is the course facilitator, Dr. Jennifer Walinga. A professor at RRU’s School of Communication and Culture and an award-winning researcher whose projects focus on the central theme of optimal human performance, she’s also a former rower who won gold medals at the Olympic and Commonwealth Games as well as the world championships.

Walinga says her motivation for working with the CFLPA is simple: “Sport needs leadership training and development in all ways, in all forms, in all aspects of the sport system.”

Without training, sport leaders often end up being traditional, top-down, patriarchal leaders when “sport at its best, sport at its most fundamental… the essence of sport is collaborative.”

“It’s about the pursuit of excellence,” she adds. “It’s a very human, social endeavour that is about social good, social profit.”

Universities have similar goals, she says, and Royal Roads’ purpose aligns with the CFLPA’s desire to help its members. “We’re here to serve the community, we’re here to serve the learning of our nation, our world, and contribute in that way. It makes sense to partner with that organization,” Walinga says.

Zoë MacLeod, RRU’s associate vice-president, Professional and Continuing Studies, agrees, saying the partnership is important because of the need for modern, educated leadership in sport.

“How can we find pathways for athletes who are finishing their career or wanting to take on other aspects of work, either post-career or during?” MacLeod says.

“They’re very open,” she says of the CFLPA. “They appear very interested in, and care about, learning and professional development for their members.”

While the course offers training for those members planning for their future, for the university, it presents an opportunity to perhaps pilot programs that could be expanded for a wider audience, even into degree programs.

Says CFLPA’s Ramsay: “There’s a common goal here… There’s a responsibility, I believe, to help transition the athlete and that transition doesn’t just happen when their career is over.

From the Sport Leadership course page: “Sport Leadership provides learners with the competencies and skills to enhance the practice of self, team, and organizational leadership within a sport context. The program will utilize current cases and challenges in sport as the foundation of the leadership training ground. Participants will work both with their cohort and one-on-one with their instructor to identify their individual leadership strengths and opportunities, and to create a personal leadership development action plan.”