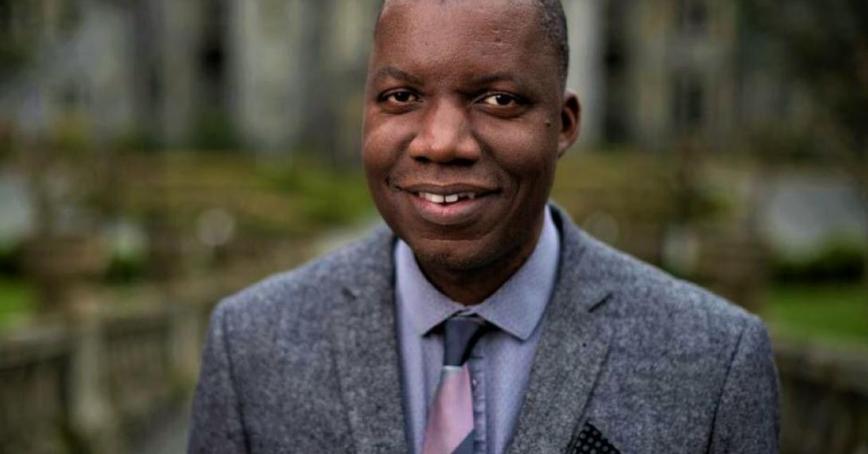 “She said, 'Daddy, be safe out there.' That brought me down,” He cried at her comment. For Nathan Banda, the racism he experienced while manager of an Alberta hospital became a catalyst for change, which he outlined in his research paper at Royal Roads’ Doctoral Conference.

“To think that my six-year-old daughter would be so concerned about my safety at the workplace was nothing I had ever imagined.”

Banda, who is pursuing his Doctor of Business Administration at RRU, was chosen as doctoral session chair for Equity, Diversity and Inclusion Applied Research at the RRU Doctoral Conference in summer 2021 after submitting his auto-ethnographic paper, A minority, black employee's perspective on the unspoken racism in Alberta Health Services.

He thought be had gotten past the racism that previously held him back. But then at the hospital where he worked one morning, on a wall in the bathroom he used almost exclusively, he encountered a hateful message, that all Blacks must die. The message included a racial slur.

It was around the same time as the George Floyd protests. Banda had left Minnesota, where Floyd was murdered by former Minneapolis police officer Derek Chauvin.

RCMP in Alberta investigated the hateful message on the hospital bathroom wall, but never determined who wrote it. Banda was shaken.

“I started reliving everything, from South Africa all the way to the U.S. and the badlands of Alberta.”

Two days after discovering the message, he was getting ready to go to work when his daughter, soon to be seven years old, cautioned him about his safety.

Banda, born and raised in the Republic of Malawi, says he has experienced racism everywhere he's been since. It followed him to South Africa, then the U.S., then Canada. Sometimes the racism was subtle, other times overt. He says he has been passed over for jobs and advancements and told to attend a different church. He's been screamed at in the street, all because of the colour of his skin or his ethnicity. But it wasn't until his safety and that of his family was threatened that he realized resiliency wasn't enough.

Banda left his previous job at the hospital in Drumheller, AB after being passed over for a job he felt he was well- qualified for. He accepted a similar position, acute care manager, in a community about an hour away. But he returned to Drumheller 11 months later, at the encouragement of former colleagues, to take the same job he first applied for after the person who held it left. Banda later accepted a higher position at the hospital, site manger of the Drumheller Health Centre.

Soon after the bathroom graffiti occurred, the hospital invested close to $2 million in safety improvements, from surveillance cameras to security doors, locks and lights. A security guard was stationed at the front entrance.

“There was a lot of support from the leadership across the organization to act swiftly,” says Banda, who also started implementing changes at work, to encourage more diversity.

He met with different departments, asking what everyone could do together to make the environment more accepting. He conducted an employee survey and collected suggestions. He also helped organize unconscious bias training, which 150 hospital employees attended, as well as multi-cultural events.

As well, Banda formed a local diversity and inclusion council, which is to launch at the hospital at this month.

“We've made a lot of progress.”

It has also increased his visibility, at the hospital and abroad. He's been sought to help resolve issues or be part of discussions around similar issues in the provincial health system.

Banda, whose research at RRU is about the retention of nurses in rural areas, wrote his paper for the doctoral program and submitted it for the conference because it fit the description of lived experience and theme of diversity and inclusion.

The paper was reviewed and selected for presentation, one of 100 from 18 universities. He was chosen chair of the first conference session of the 2021 RRU Doctoral Conference, held virtually Aug. 20-22, 2021.

“I was humbled,” Banda says.

The conference, the third he has attended, went well.

“It was a very powerful conference,” Banda adds. “The diversity of presentations and keynote speakers was so good.”

It also allowed him to engage more in the conversation about combating racism.

“We need not only to acknowledge its existence, but to start dealing with it too. In my own case, I'm still here because of my resilience,” Banda says. “Talk is cheap. We are losing a lot of good workers through racism.”

He says more allies and diversity hires in positions of influence would be another powerful step in advancing the issue past conversation.