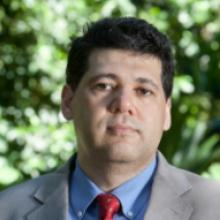 Simoes has lived, worked and studied in Canada, the United States, Latin America and Europe. He has held senior leadership positions such as vice president at Disney TV International (US); board director at HBO Latin America (US); managing director sports/PPV at Globosat (Brazil); CEO and chair of the board at Playboy (Brazil); and international business development director at Nethold B.V. (Netherlands). He serves as president and chair of the board of directors at the Alternative Dispute Resolution Institute of British Columbia and as vice-president and president-elect at the Alternative Dispute Resolution Institute of Canada.

Simoes holds a Master of Business Administration from INSEAD where he also completed his International Director Program certification. He has a Master of Arts in Dispute Resolution from the University of Victoria, undergraduate and graduate degrees in business administration from Fundação Getulio Vargas, and a Law degree from Pontifícia Universidade Católica de São Paulo. He has also completed New York University’s International Management Program.