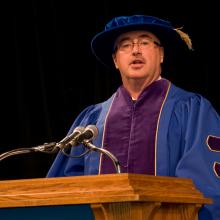 Bob Beckett is the City of Langford’s fire chief, responsible for the provision of all fire protection and rescue services in the West Shore community. He is also the municipality’s emergency program co-ordinator.

After terrorist attacks on the World Trade Centre in September 11, 2001, Beckett traveled to New York – with Mayor Stu Young and RCMP Staff Sgt. Bruce Brown – to extend condolences to the community of Freeport, New York and to deliver money raised on the West Shore to help families of Americans lost in the tragedy.

In 2004, he helped deliver firefighting training to Kabul firefighters following the arrival of donated equipment from Canada and, in 2007, Langford Fire Rescue sent another shipment of equipment to departments in Kabul and Kandahar.

In 2008, Beckett and Langford Fire Rescue hosted a delegation of firefighters from Afghanistan. The visitors received various training opportunities, attended community events and were able to return to Afghanistan with some new equipment.

Beckett regularly visits classrooms in the region; participates in numerous meetings and events to promote community aid projects; and, for the past three years, has been chair of the Walter Gretzky CNIB Golf Classic.

With assistance from the fire department and the West Shore Chamber of Commerce, he also played a key role in establishing Langford’s now much-anticipated Santa Claus parade.

Beckett is the recipient of several awards. In 1998, he was presented with a Fire Service Exemplary Service Medal from the federal government and, in 2003, he earned the Queen`s Golden Jubilee Medal; the Volunteer of the Year Award from the West Shore Chamber of Commerce; and the Rotary International Paul Harris award. In 2005, he received a Victoria Leadership award for his community and international humanitarian efforts.

Beckett holds an MA in Leadership and Training from Royal Roads University (2000) and graduated with a Diploma in Ambulance and Emergency Care from Conestoga College of Applied Arts and Technology in 1979.

A family man, a humanitarian, a visionary and a volunteer, Langford Fire Chief Bob Beckett daily brings compassion, commitment and energy to his life and to his work.

In 1996 – the year he moved to Langford to become fire chief – Bob Beckett served for a month as a volunteer firefighter and paramedic in war-torn Sarajevo. Years later – moved by the horror of terrorist attacks on the World Trade Centre on September 11, 2001 – he traveled to New York with Langford Mayor Stewart Young and RCMP Staff Sgt. Bruce Brown to extend condolences and deliver money raised on the West Shore for families of Americans killed in the tragedy.

More recently, Bob Beckett has been instrumental to the success of a cooperative effort between Rotary Clubs, the Canadian Military and the City of Langford and Langford Fire Rescue. Called Canadians Sending Afghanistan Firefighting Equipment, or Can S.A.F.E., the humanitarian effort has shipped donated firefighting equipment to Kabul and Kandahar since 2004. Bob Beckett travelled to Kabul in 2004 to deliver firefighting training to firefighters there. In 2008, he and Langford Fire Rescue hosted a delegation of firefighters from that country to receive training, attend community events and accept more equipment donations.

Bob Beckett’s unwavering dedication and enthusiasm as an ambassador is not just reserved for parts of the world distant and in strife. Ever since he began his career as a firefighter in 1974 with the City of Waterloo, Ontario he has been known as a person who would, without hesitation, get involved in his community. To describe just some of this work, he’s chaired a committee to raise funds for muscular dystrophy research, been both a Rotary Club member and president, played a key role in establishing Langford’s much-anticipated Santa Claus parade, and has chaired for three years the Walter Gretzky CNIB Golf Classic raising money for vision health.

Bob Beckett is the recipient of several awards, including a Fire Service Exemplary Service Medal from the federal government in 1998 and, in 2003, the Queen`s Golden Jubilee Medal and a Volunteer of the Year Award from the West Shore Chamber of Commerce. He has also been honoured with a Victoria Leadership award for his community and international humanitarian efforts.

A graduate in 2000 from the MA in Leadership and Training program at Royal Roads University, Bob Beckett has been a shining example throughout his life of how leadership can truly make a difference locally and globally.

We of Royal Roads University are honoured to grant Bob Beckett the Chancellor’s Community Recognition Award in celebration of his outstanding service to communities whether they be in Greater Victoria or oceans away.