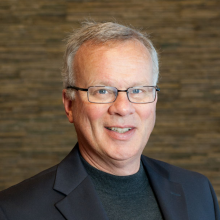 Scott Richardson is a leadership coach, consultant and facilitator specializing in coaching executives. As an Executive Coach he draws on his study of leadership, experience as a leader, and knowledge and practice of coaching for the benefit of each executive he works with.   As an executive coaching educator, Richardson’s roots reach back to his role as one of the founding faculty team that first launched the Executive Coaching Certificate at Royal Roads in 2001. Since 2004, Richardson’s appetite for learning and sustainability has been well nourished by a commitment to raising Highland cattle. Say what you will about the profitability of this venture, he and his family eat well.

Richardson worked for approximately two decades with the National Energy Board, the vast majority of which was in a leadership or executive capacity. Since then he has accumulated 14 years of experience running his own coaching and consulting business working with emerging, strategic and C-level leaders. His volunteer experience includes four years as CEO of The Alberta TrailNet Society, while they were principally engaged in building the TransCanda Trail, and another six years as chair of The Highlands District Community Association.

He also studied coaching for one year with James Flaherty of the New Ventures West School of Coaching in San Francisco.  In 2007, Richardson received that Master Certified Coach designation from the International Coach Federation.

MA in Leadership and Training (now the MA Leadership)