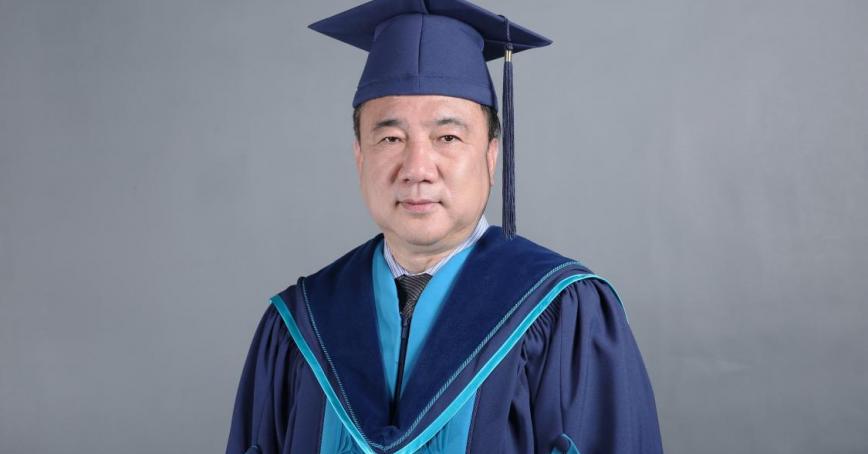 Dr. Weichang Yang has built a business empire over the last 30 years and the foundation on which it sits is rock solid: education.

And for Yang, who holds a PhD in Education from Huazhong University of Science and Technology and an Executive Master of Business Administration from Beijing University, the bedrock of his approach to enterprise was a national push in China to educate the populace.

His dedication to educational excellence and international cooperation is why Royal Roads University is conferring an honorary Doctor of Laws degree upon Yang at Spring 2021 Convocation June 18.

The confluence of Yang’s business interests and his passion for education took effect in the late 1990s. He’d left a promising civil servant job in 1991 and launched Northern Investment Group Co. Ltd., a publicly traded investment corporation that today owns more than 25 companies and has some 20,000 employees. But a few years after it started, as Yang was growing the business, he discovered a lack of management talent was holding it back.

“I knew that only through the continuous empowerment and growth of every employee can the organization get better,” Yang says through a translator, noting that just as it was crucial to train his employees, it was also important to provide access to higher education to millions of people in his homeland.

The co-operation between Yang’s companies and Royal Roads began in the early 2010s, and has resulted in thousands of students from China studying with RRU and visiting the campus for stints ranging from a few weeks to a few months.

“Royal Roads University has advanced teaching concepts and a complete education system, accompanied by a good international reputation,” Yang says. “Therefore, the exchanges and co-operation between the two parties are very necessary, and we have always regarded Royal Roads as our important long-term partner.”

In addition, “The exchange of education and culture is an important manifestation of the progress of world civilization and an inevitable condition for promoting global cultural diversity,” he says. “The mutual learning and integration between countries is conducive to absorbing each other's outstanding civilization achievements, learning from each other's strengths, and promoting the progress and development of world civilization.”

At the core of that are the progress and development of individual students, he explains. “When we run education programs, the first consideration is not economic benefits, but how to meet the needs of individual empowerment and growth, and how to cultivate international talents that meet the development needs of the new era.”

Key to cultivating international talents among the Chinese students Yang’s companies send to Royal Roads and other North American post-secondary schools is opening their eyes to how people live in other countries as well as training them in cross-cultural abilities.

Still, Yang has an eye on the stars for the students his companies, and Royal Roads, serve, saying in a message to them: “Young students are both dream-catchers and dream-realizers. Dream chasing requires passion and ideals, and dreaming requires struggle and dedication… Open your eyes, and embrace the bigger world.”