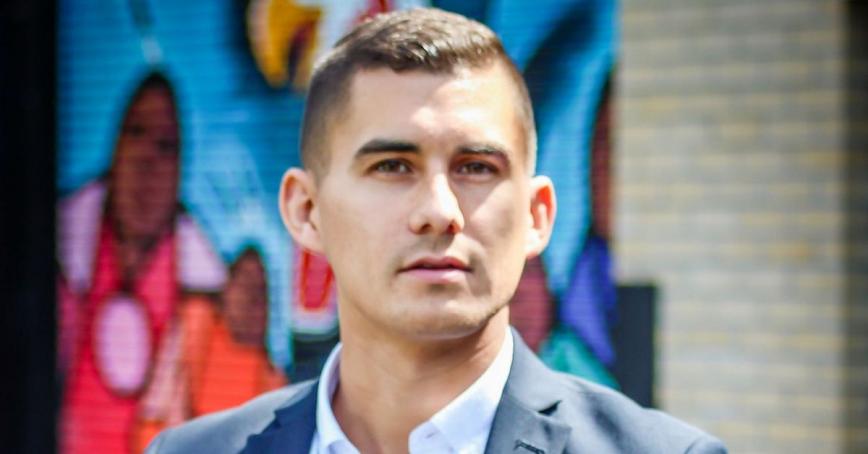 Tyson Atleo, the second member of his Ahousaht First Nation family with a degree from Royal Roads University, is living up to his fourth traditional name, working on natural solutions to the climate crisis.

“In our Ahousaht cultural tradition, people are given names at certain milestones in their lives, and those names are usually the names that come from your direct ancestors,” says Atleo, a Hereditary Chief-in-Line of the Ahousaht Nation.

His fourth, or adult name, is ʔikaatius, given to him by his family in a ceremony.

“Essentially it means that what I speak can help bring good things to others.”

Atleo currently works in Victoria as the natural climate solutions program director with Nature United, a division of The Nature Conservancy, to ensure significant reductions in greenhouse gas emissions around the world with a rights-based approach and in collaboration with Indigenous communities, industry sectors, governments, and other civic organizations

“As Indigenous Peoples, our well-being is intimately connected to the well-being of the lands, waters, and natural world,” he says.

Atleo recently graduated with a Master of Arts in Environmental Education and Communication and credits RRU for a flexible program that allowed him to continue his work while pursuing his studies.

“Royals Roads was a bit of a blessing for me,” says Atleo. “It has great distance learning programs that allow you to maintain your professional expectations and interests and progression while studying at the same time in a way that you don't feel overwhelmed. You feel supported, and you feel the ability to apply your learning directly to whatever you're doing in the real world. And it works very well for me.”

He now has two degrees from RRU, having previously earned an undergraduate degree in the School of Communication & Culture, and now Atleo has plans for a third degree – a master’s in psychology – at another university.

Atleo was feeling like something was missing in his work on Indigenous and economic development projects, and governance issues when he sought his first degree.

“My grandfather, Dr. Umeek Richard Atleo, and others in the North American Indigenous space talk about things like education and development opportunities as the new whales, or the new buffaloes.”

“And so, I did some soul searching, and reflection, and came to the conclusion that what would make me most happy and what I'm truly most passionate about is environmental conservation, and I figured that out by essentially reflecting on what brought me the most joy as a kid,” he says.

The Ahousaht Nation has more than 2,100 members, but fewer than half live in the village of Maaqutusiis, located on the southeastern tip of Flores Island in Clayoquot Sound, a half hour boat ride north of Tofino.

Atleo was born in Vancouver and spent summers in Maaqutusiis. He splits his time now between homes in Victoria and the village but considers the entire Ahousaht Nation territory his true home and wants to protect it.

Atleo's passion for conservation was sown in what he learned from his culture about establishing and maintaining protocols with the natural world.

“So, everything that I was taught from a cultural perspective, to me, indicates a need to focus on maintaining positive reciprocal and respectful connections to natural systems, because they give us life,” he says.

“We have a territory that is magnificent, in terms of how it gives life to the world, not only in the carbon stores and the old growth, but the salmon, just a brilliant diverse ecosystem," Atleo says. "And so I'm passionate about helping to conserve that ecosystem, and other ecosystems, not only biodiversity, but natural climate solutions, which we know play a serious role in the mitigation of the climate crisis by helping us reduce carbon emissions through sequestration.”

Learn more about the Master of Arts in Environmental Education and Communication program.