Rejuvenation of Japanese gardens build on tradition and perfection 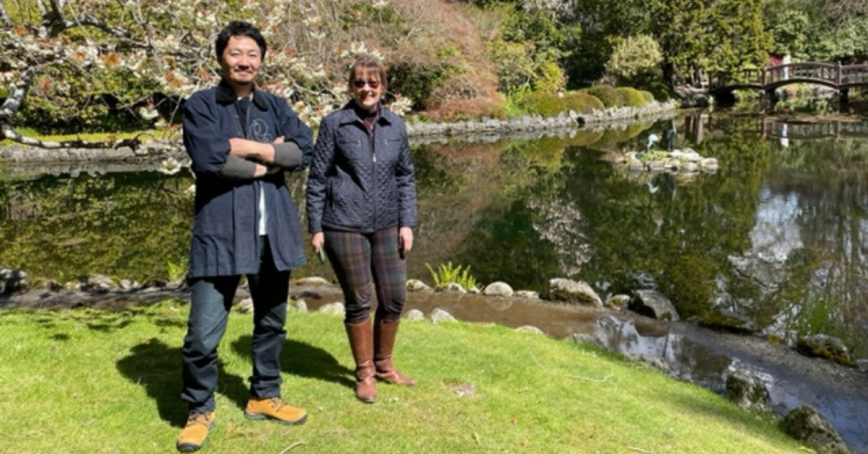 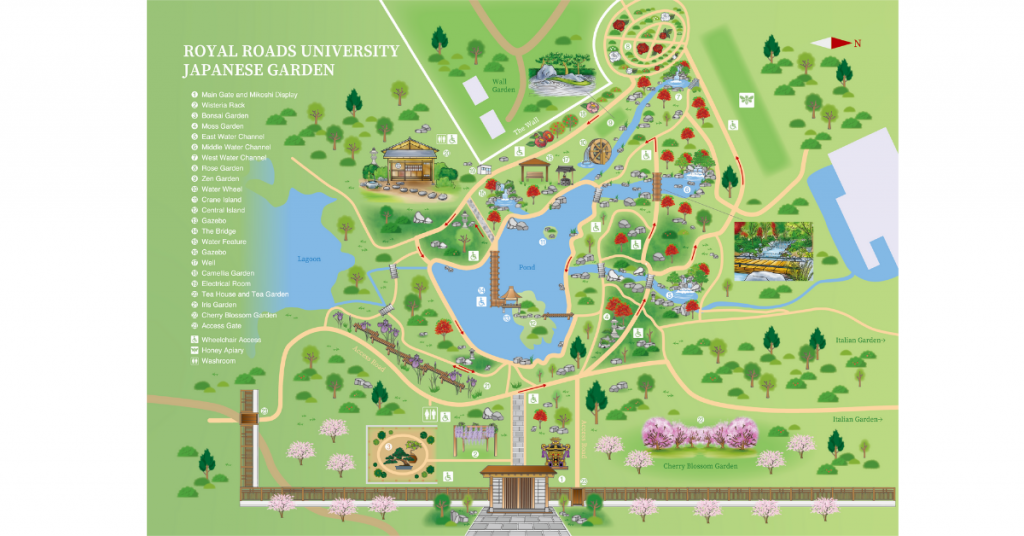 If you’ve visited the Royal Roads University campus, there’s a chance you’ve wandered through the Japanese garden. You likely enjoyed the quiet, the serenity, the soft buzz of insects hovering over flowers, the gentle scoop and splash of the wooden waterwheel in a stream. You marveled at the sight of a heron, perched on a rock, still and waiting, then, suddenly, majestically aflight, or a trout breaking the surface of a lake. You bathed in the lush colours: the green grass, the snowy Shirotae flowering cherries, the towering Pink Pearl rhododendrons. Perhaps you crunched along a gravel path or padded across a green lawn, paused in a pavilion for a moment of rest and respite, or simply enjoyed the shade of a century-old tree.

And maybe you thought, “This is perfect.”

A key part of Royal Roads’ A Vision in Bloom, a fundraising campaign launched last year to restore and maintain the university’s historic gardens and related facilities, is a large-scale revitalization of the Japanese gardens, which are now more than 100 years old and in need of renewal.

Over the next four years, RRU plans to create a destination traditional Japanese garden for Canada’s west coast while restoring the gardens to their former glory.

“A Vision in Bloom isn’t just about making the gardens more beautiful,” says RRU president and vice-chancellor Philip Steenkamp, “it’s about preserving the history of this place. It’s about rejuvenating the iconic locations, such as these Japanese gardens, and it’s about re-imagining parts of our grounds for the future.”

The upper Japanese garden at Royal Roads — then the Dunsmuir family estate — was built at Hatley Park around 1909. Designed by Isaburo Kishida, this garden, bordered by a lake on one side and bisected by streams, was designed as an oasis of calm.

Japanese maples and flowering cherry trees that have now reached a venerable age were imported from Kishida’s native Yokohama, and under-plantings of azaleas and primroses were designed to light up the pathways in spring. Rustic stone lanterns remain, some of which may have been gifted from Gorge Park when the latter’s garden was looted as Japanese Canadians were being forced into internment camps during the Second World War in response to the bombing of Pearl Harbor.

The second part of the Japanese gardens, built sometime between 1916 and ’19, was designed by Tadashi Noda, who had come from Hiroshima in 1899, and surrounds a lake. It was planted with more flowering cherries on the west side and rhodos on the south. A narrow path tracing the shore of the lake leads to a curved bridge across which is an island with a pavilion extending over the water.

Built adjacent a castle designed as a reminder of the Dunsmuir family’s roots in Scotland, the gardens represented a status symbol among BC’s elite. A cultural treasure, they were also open for others’ enjoyment when the Dunsmuirs hosted fundraising events, annual fêtes and tourist visits.

Improving on a cherished foundation

The goal of the planned upgrades, says Vera Gammert, RRU’s project manager for capital projects, is to keep much of the original garden of Kishida’s design.

As some of the older cherry trees are in their sunset years, the stock will be grafted on to other trees to preserve the heritage they represent, she says. Gazebos and the fish ladders that allow ocean-going trout to make their way to the freshwater lakes will be repaired and some streams may be widened.

New features will include a teahouse, a Zen garden, a moss garden in wetter areas and bridges built across ponds along with accessible pathways throughout. Visitors will also see more than 100 bonsai trees recently donated by a Victoria couple.

Perhaps the biggest change will be the moving of the Japanese gardens’ entrance from its current location near Hatley Castle to a new spot close to the lower parking lot, says Gammert. A decorative gate will greet visitors, who will find just inside it a mikoshi room — a shrine of sorts — and a pathway lined with cherry trees, known for their colourful blossoms in spring.

Hayato Ogawa, a renowned and award-winning landscaper and landscape designer, and owner of Ogawa Landscape Design in Burnaby, BC, is leading the project and working with RRU’s landscaping staff.

“I have a strong feeling of responsibility,” Ogawa says, noting the foundation of the gardens have more than 100 years of history. “This garden represents strong and cherished traditions from the past that should be carried over to the present and future. We would like to build a garden that is loved and cherished by everyone, not only now, but also in the future.”

He adds: “Japanese gardens acknowledge that nature changes daily. We cannot try to freeze those changes but try to accommodate them into the design. A garden, like nature, is organic and not a frozen relic.”

None of RRU’s and Ogawa’s work can happen, however, without contributions to A Vision in Bloom.

The bonsai trees, for instance, came from the backyard of local nonagenarians Dick and Bette Geisreiter. With a lifetime’s worth of work and care in those tiny trees, the Geisreiters visited Royal Roads before deciding to donate.

Dick Geisreiter says he’s satisfied his legacy has a home in the RRU Japanese gardens, saying, “When we saw Royal Roads, we were very impressed… It just seemed natural for them to take [the trees].”

Another donor who’s helping update the Japanese gardens is Sheila Gulliver. She had recently moved into an apartment near Hatley Park when she learned about A Vision in Bloom. Recalling how much she enjoyed visiting the RRU gardens and especially seeing the rhododendrons — some of which date back to the earliest days of the estate — she decided to make a gift to the campaign.

In addition, she’s sponsoring a commemorative bench “to invite people to stop, rest and stay awhile,” she says.

“While life has its busy times and its slower times,” Gulliver says, “as you gain in life's experience, you realize how rich it can be to stop and simply share a moment or two with another living being. That is a joyful thing.”

As the garden designer Ogawa says, “A Japanese garden aims to bring harmony between nature and people. It is a place for us to interact and co-exist with nature.”