A journey through time & place: the Canoe Protocol 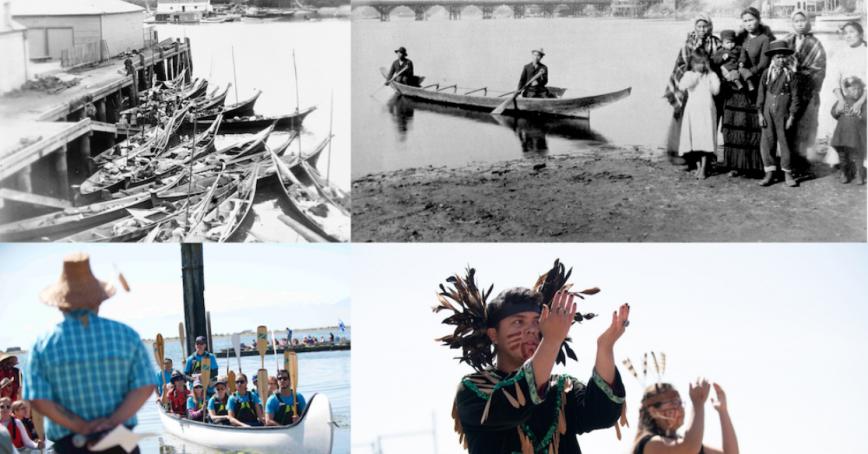 Picture one of those perfect blue-sky Island mornings. A canoe comes into view on the Esquimalt Lagoon, but stops short of shore. The canoeists raise their paddles. One stands, introduces themself, states their intention and purpose, and asks permission to come ashore to the Xwsepsum and Lekwungen families' traditional lands.

"This protocol practice is a significant sign of respect," says Asma-na-hi Antoine, who is from Toquaht Nation of Nuu-chah-nulth lands and associate director of Indigenous Engagement at Royal Roads. "The waterways were the roadway for Indigenous people to travel by canoe among communities. It doesn’t matter which community you are from. Whether you are from a different nation, are Métis, or a settler, these are the laws of the land where Royal Roads University is situated."

To arrive by canoe and just come up on the land would have been unthinkable to Indigenous families. But this essential protocol was not understood or practiced by colonial people arriving on the Indigenous lands.

In 2016, Butch Dick, a Lekwungen member, educator, artist and member of the Heron People Circle at Royal Roads, shared the idea for a canoe challenge that would include the protocol.

National Indigenous Peoples Day celebrations at Royal Roads now include this important mark of respect, missing since colonization. Thousands turn out to watch and join in the journey of learning.

"Through this practice we honour the traditional teachings of the Lekwungen peoples and demonstrate how different peoples can proactively move towards reconciliation," says Antoine.

Antoine established the Heron People Circle in 2013, knowing the benefits of having an Elders and Old Ones Circle to turn to.

The Heron People Circle at Royal Roads provide guidance in weaving traditional and western practices in the classrooms, at events and in workshops.

"Their advice and teachings are essential to advancing decolonization work," says Antoine.

Welcome! It's is a simple word, yet it expresses more than a greeting. Whether in the language of the Lekwungen, Nuu-chah-nulth, Kwakwaka’wakw, Métis, another first nation or a settler on these lands, it signals open arms and open hearts. It creates an immediate connection to a place and a link among people.

We mark our 25th anniversary with the same spirit of connection. It flows through the power of the place and in our relationship with Indigenous people, the first inhabitants of the land, whose ancestors and families we honour.

This land has been part of the fabric of the life of Indigenous communities and families long before Hatley Castle was built, and it will be long into the future.

The university's goal is to have a substantial relationship with the Coast Salish and W̱SÁNEĆ nations. Royal Roads is committed to becoming a great host. To welcoming all guests and visitors by creating an environment that enhances Indigenous culture and respects traditional knowledge.

As we celebrate 25 years as a public university, we’re also celebrating our past in order to transform the future. Read more about life in the of our weekly series exploring the past, present and future of Royal Roads: royalroads.ca/25.