Japanese Garden history entwined with the two men who created it 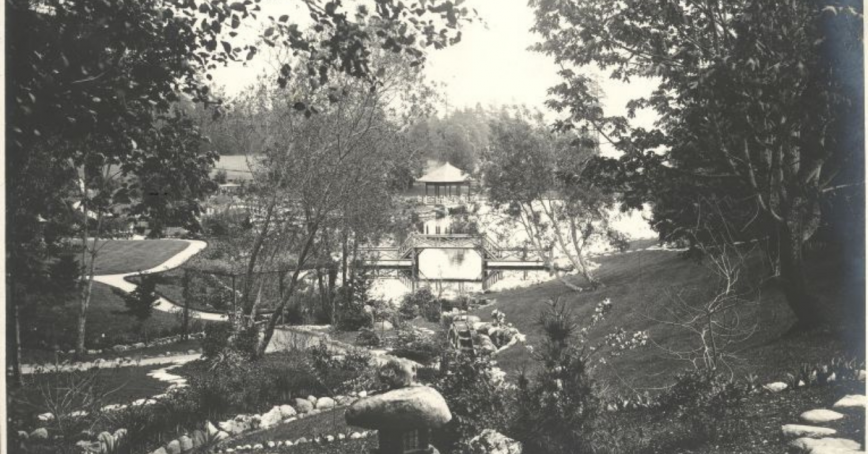 It’s impossible to tell the story of a place without telling the stories of its people.

Royal Roads University sits, for example, on the traditional Lands of the Xwsepsum and Lekwungen ancestors and families. They hunted, foraged and fished across the land and down to Esquimalt Lagoon, the Olympic Mountains looming in the distance.

In the early 1900s came the Dunsmuir family and their efforts to build a castle and surrounding estate, Hatley Park, bringing Edwardian Scotland to the shores of Vancouver Island.

That estate wasn’t just about a wealthy family headed by a former BC premier and lieutenant-governor, though. Hundreds of workers, many of them poor immigrants, created what stands today as one of Canada’s most lush and verdant university campus.

That campus is noted for the old-country castle, its vast forest, its exquisite Italian garden and perhaps its most iconic natural feature, the tranquil Japanese gardens, where visitors pause at the pond to watch the fish and birds, or listen to the gentle scoop and splash of the wooden water wheel.

Refreshing the Japanese gardens are a key part of Vision in Bloom, a fundraising campaign focused on restoring and maintaining the university’s historic gardens, grounds and related facilities.

Remember their names: Kishida and Noda

“Kishida was 70 years old when he travelled from Yokohama and designed the Gorge Park gardens in Victoria,” RRU archives manager Jenny Seeman wrote in a 2018 article. “The plan included several ponds decorated with stone lanterns, as well as, an iris garden, a wisteria arbour and tea house.

“The Gorge Tea Garden was a huge success,” Seeman wrote, noting Kishida was then commissioned to create more private gardens before his return to Japan in 1912, including Hatley Park.

When he left Vancouver Island, “a capable gardener was needed to cultivate the gardens he had started” and that man was Noda, who would be responsible for the Japanese gardens through 1927.

Wrote Seeman: “Noda was born in a village in Hiroshima prefecture... He came to Canada in 1899 when he was 17 years old to work as a domestic help and gardener to Edward Hunt, a builder-contractor… Noda’s role with Mr. Hunt was not just inside the house, he was also his gardener and had proven abilities of his own in Japanese landscape design.”

While working for Hunt until mid-1913, Noda started his own landscaping business with Jenkichi Nishimoto, who had worked at Esquimalt Gorge Park. Later that year, however, he and his wife were living either at or near Hatley Park, where their three daughters were born, and he was working on the Japanese gardens, while also providing upkeep on the Butchart property.

“Many of the features of the Japanese gardens that we still enjoy today, are attributable to Noda,” Seeman wrote in another article last year. “From images in the archives, we can see that the stone-lined pond, the floating pavilion, bridges, wisteria arbours and, of course, the waterwheel all appeared while Noda worked at Hatley Park between 1913 and 1927.”

Japanese gardens were fashionable for the wealthy

The early 1900s were not, apparently, a simple time when people were fully immune to the forces of fashion or trends.

The value of the Japanese gardens at Hatley Park, Seeman notes in an interview, was as a status symbol among BC’s elite. A cultural treasure, it was open to others’ enjoyment when the Dunsmuirs hosted on their grounds fundraising events, annual fêtes and tourist visits.

“The installation of the Japanese gardens was very much a trendy thing to do and it was always with a Western aesthetic of what a Japanese garden should look like,” she says. “So, in our Japanese gardens, there were a lot of hardware features like the wisteria arch, a fishing pavilion and the water wheel” — things you wouldn’t usually see all in one place in a garden in Japan.

She says it’s also possible some stone lanterns, installed in the RRU Japanese gardens, were rescued from Esquimalt Gorge Park when that Japanese garden was looted, as Japanese Canadians — some 21,000 in BC alone — were being forced into internment camps during the Second World War in response to the bombing of Pearl Harbor.

And all the good Noda did — as a helper to Edward Hunt, as a gardener on the land that would become Royal Roads University, as a gardening company owner and, after he left Hatley Park, as owner of a shiatsu massage business on Fort Street in downtown Victoria — meant little in 1942 when he was relocated to a camp in Greenwood, BC, 31 years after he had taken the oath of naturalization.

After the war ended in 1945, Seeman said, in one of her articles, the government continued to forbid Japanese ownership of property west of the Rockies, so many former internees headed east to Ontario. Noda was one of them, moving in 1946 to Hamilton, Ontario, not far from Toronto, where his daughter, Marion, who had married at Greenwood, had settled with her family.

“Unknown to Tadashi Noda throughout his internment,” Seeman wrote, “his garden at Hatley Park was being quietly tended to by the new Royal Roads Naval College staff… [and] scores of young cadets were finding moments of peace among the trees and shrubs that had matured in the years since Noda had been gone.”

And 25 years after Royal Roads transitioned from military college to public university, its Japanese gardens endure as a lush, quiet, peaceful reminder of his skill, hard work and vision.