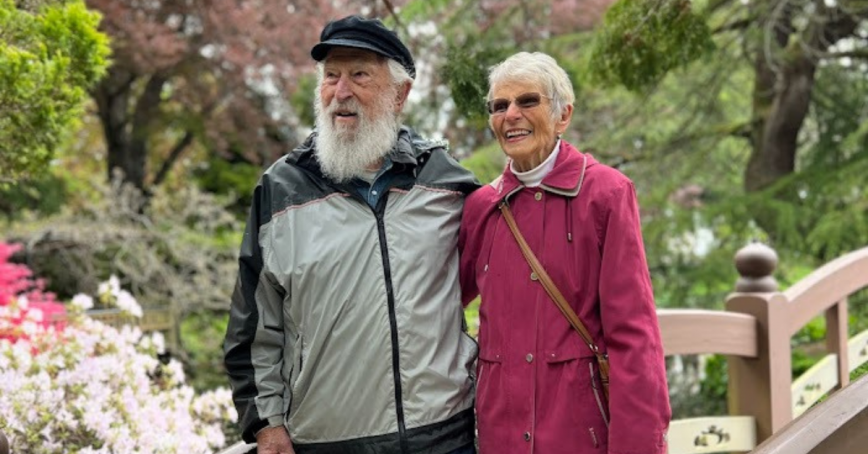 “A man should have only twelve bonsai.”

Dick Geisreiter wrote those words and yet…

And yet, over multiple decades and moves and countries, he accumulated a couple hundred of the tiny trees.

Some came from bonsai’s birthplace, Japan.

Some came from near his birthplace, Sacramento, CA, where his father was mayor, as well as a florist and landscape architect.

Some came from California’s Sierra Nevada Mountains, some from hills on Vancouver Island, his and his wife Bette Geisreiter’s adopted home for the last five decades.

Now, 125 of them have found a new home at Royal Roads University. Dick and Bette donated them as part of A Vision in Bloom, a fundraising campaign to restore and maintain the university’s historic gardens and grounds. A crew of four RRU gardeners visited the Geisreiters’ Victoria home and carefully carried them away, transporting them in their beautiful, purpose-made pots — unglazed inside and on the bottom, with drainage holes — to what will be their new home, the lush and serene Japanese gardens on campus.

But back to this: “A man should have only twelve bonsai.”

Which prompts a question: Why?

Dick, who’s 93 and wrote the clear, concise pronouncement to start the brief biography he provided to RRU’s Advancement department, explained it this way: “That way he can give a month attending to each plant in one year.”

He added: “This is what I had recently forgotten and ended up with two hundred bonsai to care for.”

“It is the second time in my lifetime I have made this mistake.”

Which prompts another question: Why didn’t he follow his own advice?

Dick’s bio doesn’t reveal the “why” but it does provide the “how”: In the 1950s, a Japanese man in his hometown who had a small collection of bonsai gave him a book on the subject; fascinated, he started a collection of his own. His father, Bert Geisreiter, came home from a 1960 visit to Japan for a Pacific Coast mayors conference with five bonsai trees the host government had gifted him. Dick, a florist like his dad and grandfather, was entrusted with their care.

“The art of bonsai is something that just grabbed me and it was a continuation of what I was doing in the florist business,” Dick says in an interview, noting that like floristry, with bonsai you’re shaping and enjoying the beauty of foliage.

And wherever he went — whether in Mendocino, in northern California, where he was a metal sculptor; or tiny Sointula, on BC’s Malcolm Island, where he, Bette and three of their combined seven kids and the six goats they brought with them homesteaded for about 10 years after they moved across the border in 1970 — he accumulated more trees to train as bonsai.

Now that he has said goodbye to a collection accumulated over a lifetime, he’s satisfied his legacy has a home at Royal Roads, which he and Bette, 91, visited before deciding on their donation. “When we saw Royal Roads, we were very impressed… It just seemed natural for them to take [the trees].

Once the work to restore Royal Roads’ Japanese gardens is completed, the bonsai will have pride of place in a special viewing area, where each can be featured at the height of its season.

“We are very happy that people will see them, where before they were in my back yard. It is a good thing for both of us.”

He is asked how many he has left at home.

“Just a few plants to putter with in the backyard,” he says.

How many? Twelve? It must be twelve, right?

“I won’t tell Bette,” he adds, sitting next to her, “but the collection is still growing.”

How did he do it?

Dick Geisreiter explains in his own words how he would collect trees to train as bonsai:

Most of the trees in my first collection were collected from the Sierra Nevada mountains. We would find a pine or a cedar tree growing in a rocky crevice. We would cut all of the roots back on one side, then place it back and cover it up, packing the damp soil firmly around it. The following year, we returned and repeated the procedure on the other side of the tree, and packed it well and covered it again for the next year. The third year, we would return to the site and remove the tree. This process was done to eliminate the shock of cutting all of the roots at one time.

This year, the university hopes to raise an additional $250,000 to continue the work and begin several large multi-year projects, including significant expansion to the Japanese Garden and restoration of the Glass House, an original greenhouse from the Dunsmuir era that has been in continuous use for more than 100 years. There are many ways to support A Vision in Bloom.