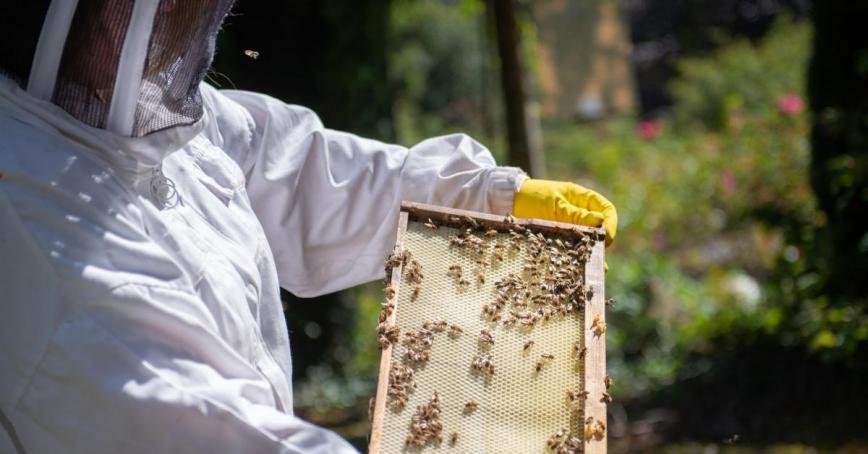 Bees are known for their industrious nature. They tirelessly buzz from blossom to blossom, sipping nectar and collecting pollen, working not just for the good of the hive but, also, for the plants they unknowingly pollinate.

It’s that diligence — and more than 100,000 bees — that Royal Roads University is counting on to jumpstart its kitchen garden.

A 5.26-acre walled plot just a short walk from iconic Hatley Castle, the kitchen garden dates back more than a century and, with the adjacent Glass House, provided food for the early residents of estate.

Long before that, the land on which Royal Roads sits was a place where generations of the Xwsepsum and Lekwungen First Nations people lived and harvested food and medicine from both land and sea.

Making that garden not just a historical footnote but an active, productive part of the campus is a key component of Royal Roads’ Vision in Bloom, a fundraising campaign launched last year to restore and maintain the university’s historic gardens and related facilities.

“They play a very important role,” Alanna Morbin, RRU’s beekeeper, says of the campus bees. “If we didn’t have the apiary on site, pollination would still occur…but we would notice a difference in crop production without the hives nearby.”

She points to her own backyard as an example: A pear tree there yielded fruit but since she added hives to the space, the tree began producing bumper crops.

“[Bees] really enhance fruit production contributing to the success of plant pollination with the frequency that a type of plant is visited,” Morbin says.

To that end, Royal Roads will be doubling the number of hives this year (from one to two) in their current location, putting tens of thousands of the little pollinators amidst the plants they will help reproduce. And, as the kitchen garden initiative grows over the next few years, the plan is to relocate the apiary to be closer to the renovated and expanded fruit and nut orchard.

That’s crucial to Royal Roads’ initiatives because, as university President and Vice-Chancellor Philip Steenkamp said last year, “We want to return to fruit and vegetable production on a fairly large scale.” He also noted that not only could RRU provide fresh produce for use on site but also to help people in neighbouring communities. As well, the garden could be a critical link to the university’s teaching and research missions relating to food security, hunger and climate action.

“It’s just ripe for food growing,” Solara Goldwynn says of the walled garden, adding that the first stage for 2022 is a Giving Garden, with food to be donated to community groups.

Co-owner with husband Tayler Krawczyk of the business Hatchet & Seed, which designs and installs edible landscapes, Solara was hired as food systems manager of the RRU kitchen garden after first looking into the Master of Arts in Environmental Education and Communication program — she’s now a student currently on leave to focus full-time on the kitchen garden initiative.

The Giving Garden will include space for native and non-invasive pollinator plants that will feed native bees, butterflies and hummingbirds as well as honeybees, plus vegetables and perennial flowering plants grown together for beauty and ecosystems health. As well, Goldwynn says, more fruit trees will eventually be planted in the kitchen garden area in addition to an Indigenous food and medicine garden, hedgerow and meadow, led by Kenneth Elliott, an ethnobotanist from Cowichan who has worked with RRU for many years.

Following that, the larger food-production garden will ramp up but the key, she says, is a diversity of plant species to deal with the challenges of climate change, starting with a foundation of deep-rooted perennials and healthy soil.

An ongoing important piece of the puzzle are bees and other pollinators. Goldwynn notes that next year could bring construction of a “bee hotel” or some kind of structure to accommodate and protect native pollinators of various sizes.

“We recognize that even though all bee species are small, they still require safe spaces to thrive, and an assurance that the habitat and forage areas they rely on is both healthy and pesticide-free,” adds Morbin, the beekeeper.

Morbin points out “the beautiful relationship that bees and plants have. It’s really harmonious, they rely on each other. The plants need the bees to reproduce and the bees need the plants to feed their young.”

And Royal Roads needs them to make its garden flourish.

• Read more Vision in Bloom stories about bees and the walled garden.

This year, the university hopes to raise an additional $250,000 to continue the work and begin several large multi-year projects, including significant expansion to the Japanese Gardens and restoration of the Glass House, an original greenhouse from the Dunsmuir era that has been in continuous use for more than 100 years. There are many ways to support A Vision in Bloom.