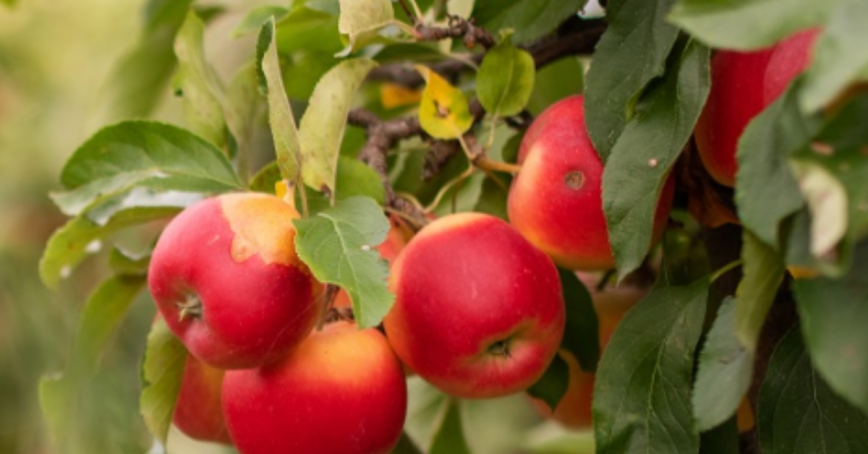 If you eat a hundred-year-old apple, you taste history.

To be more precise, if you eat an apple — or pear, or plum — from a hundred-year-old tree, you taste the original grower’s intentions, you consume decades of care, you digest generations of climatic change, of droughts and floods and storms.

On the grounds of Royal Roads University, a small orchard remains from Hatley Park’s early days more than a century ago as the Dunsmuir family estate. Inside and outside the 5.26-acre walled kitchen garden survive varieties of trees whose names might as well have come from a Dickens novel given modern shoppers’ limited familiarity with much beyond the ubiquitous Bartlett pears and Gala apples.

These are all apple varieties at RRU, which also boasts 100-year-old pear and chestnut trees to complement the grapes growing in the glasshouse adjacent to the kitchen garden.

Saving these trees, reviving and propagating them for future generations is a key part of A Vision in Bloom, a fundraising campaign focused on restoring and maintaining the university’s historic gardens, grounds and related facilities.

Barrie Agar calls them “a bridge to the past and to those gardeners who put them in,” and she should know.

A gardener at RRU for 21 years — and head gardener for the last 16 until her retirement in 2021 — she’s also an apple lover and says newer varieties tend to have one-dimensional tastes. “But you taste these older varieties and they have levels of flavour,” she says. “You know when they talk about wines and they have all these different [tasting] notes? These apples are like that.”

But the heritage fruit trees are about more than the fruit.

“The stocks they put those trees on, they’re still good even a hundred years later,” she says, noting that some of the apple varieties were planted because the fruit kept well over time.

“They’ve kept going. It says something for them. If people keep propagating them, it’s a good apple, or pear.

“It’s still a valuable resource. It’s not just a piece of history, it’s living history that you’re using and still looking after.”

“They definitely connect back to a period of history in terms of the Dunsmuir days,” says Solara Goldwynn, food systems manager of the RRU kitchen garden. “What they represent to me is that these trees have gone through over a hundred years of climate change in their lifetime. They’ve lived on that land and weathered the storm. So they hold within their plant bodies this information that represents many, many years of people eating and harvesting and celebrating food together.

Goldwynn emphasizes the planned role of the revitalized kitchen garden and the heritage fruit trees in providing food and education for both the university and the larger community.

“We’re very much aspiring to continue the stewarding of these trees and also planting and nurturing more of them,” Goldwynn explains. “It’s a super special place and we’re excited to bring people in there and show them what a tree looks like at maturity and what it looks like at beginning stages.”

“Everything we’re doing in the kitchen garden is going to have an impact on local food security, in terms of a place for people to learn about food growing, a place where the public can come and see what food growing can look like on a small scale as well as providing food for local communities, food banks and our own catering on campus, “says Goldwynn.

Heritage in the garden

Jenny Seeman, Royal Roads’ archives manager, wrote a presentation about the walled garden at the university:

An extensive kitchen garden and orchard were maintained within the walled garden. The walls served multiple purposes: protecting the crops from the resident game stocks, providing shelter from winds, and a surface for espaliered fruit trees. The sheltering effects of the garden wall also raised the temperature of the enclosure through the release or stored heat from the sun. The warmth encourages fruit trees to ripen early.

In front of the greenhouses, beds of cabbages, cauliflower and brussels sprouts flourished, and free-standing apple, plum, mulberry and pear trees lined the pathways…[The] apple species were the backbone of the commercial apple industry of the early 1900s and were sold by the Dunsmuir farm.

English walnut trees were also grown within the walled garden and an avenue of black walnut was planted behind the walled garden. It’s hard to know if these trees were planted for their nuts or for the value of the timber, which is popular for fine carpentry.

West of the greenhouses, raspberry bushes lined the footpaths and supplied ample fruit for jam making. There were likely strawberry patches as well. From 1914 to 1918, several estate staff spent their spare time in jam production as a contribution to the war effort.

Let’s keep good things growing! Join us with a donation to A Vision in Bloom and help to restore RRU garden heritage, build food production or to celebrate a friend or loved one in your life.