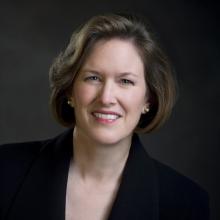 Elyse Allan is a passionate champion for Canada’s competitiveness, advancing the country’s science and technology base and competitive fiscal policy. A strong communicator, Allan is an inclusive leader who builds consensus.

As president and chief executive officer of GE Canada and vice-president of GE, Allan is responsible for growing GE’s business in Canada. Her career with GE began in 1984, and has spanned the US, Canada, and several industrial and consumer GE businesses including aviation, energy and lighting.

Prior to her current position, Allan was president and CEO of the Toronto Board of Trade and, before that, a senior executive at Ontario Hydro.

She actively engages in industry groups, public policy and the community and serves on the boards of directors for several organizations, including the Canadian Council of Chief Executives, the C.D. Howe Institute, MaRS Discovery District, Conference Board of Canada and the Royal Ontario Museum board of governors. Allan has also served on a number of federal and provincial government advisory boards.

Allan has been recognized as a YWCA 2012 Woman of Distinction (Business), a Top 100 Business Women of Influence by the Women’s Executive Network and as one of Canadian Business Magazine’s 25 Most Powerful People in Canada (2009).

She holds a Bachelor of Arts in biology and environmental studies from Dartmouth College in New Hampshire and an MBA from the Amos Tuck School at Dartmouth. An active alumna, she serves on the Tuck School Board of Overseers. Allan holds an honorary doctorate from Ryerson University and Saint Mary’s University.

Elyse Allan is a passionate champion for better ways of doing business. With an analytical mind, she is known for her ability to see the big picture and help others see it as well.

As president and chief executive officer of GE Canada and vice-president of parent company GE, Allan is responsible for advancing the company’s diverse business interests, which span from appliances to finance and health care. With a focus on driving innovation and meaningful change, Allan has lent her leadership to initiatives such as economic development in remote communities and sustainable energy management.

Allan is a strong communicator and an inclusive leader. She sees opportunities to connect with communities and businesses to work with their needs in order to advance social and economic goals for the broader community.

Allan brings this approach into her work with industry groups, public policy development and the community. She serves on the board of directors for several organizations and is an active mentor both within GE and in the community.

She is a passionate champion for science and literacy learning for youth, as evidenced through her support for GE’s partnership with Actua. The organization inspires 220,000 youth annually to learn and interact with science, technology, engineering and math programs. Allan champions these programs with a special focus on Aboriginal youth involvement.

Allan has been recognized as a YWCA 2012 Woman of Distinction, a Top 100 Business Women of Influence by the Women’s Executive Network, and as Canadian Business Magazine’s 25 Most Powerful People in Canada for 2009.

For her notable contribution to innovative leadership and community building, Royal Roads is honoured to present Elyse Allan for the honorary degree, Doctor of Laws.