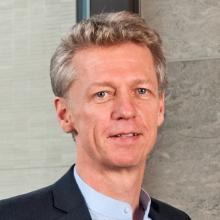 James Orbinski is a humanitarian practitioner and advocate, as well as a leading scholar in global health. He believes in humanitarianism, in citizenship and in actively engaging and shaping the world in which we live, so that it is more humane, fair and just. As of September 2012, Orbinski is Research Chair in Global Health at the Balsillie School of International Affairs, and professor of International Policy and Governance at Wilfrid Laurier University. At the University of Toronto, he is full professor of medicine at the Dalla Lana School of Public Health, and senior fellow at both Massey College and the Munk School of Global Affairs.

After extensive field experience with Médecins Sans Frontières / Doctors Without Borders (MSF), Orbinski was elected MSF’s international president from 1998 to 2001. He launched its Access to Essential Medicines Campaign in 1999, and in that same year accepted the Nobel Peace Prize awarded to MSF for its pioneering approach to medical humanitarianism, and most especially for its approach to witnessing. Orbinski worked as MSF’s head of mission in Goma, Zaire in 1996-97 during the refugee crisis. He was MSF’s head of mission in Kigali during the Rwandan genocide of 1994, and MSF’s medical co-coordinator in Jalalabad, Afghanistan in the winter of 1994. He was MSF's medical co-coordinator in Baidoa, Somalia during the civil war and famine of 1992-1993. Orbinski’s first MSF mission was in Peru in 1992. For his medical humanitarian leadership in Rwanda during the 1994 genocide, he was awarded the Meritorious Service Cross, Canada’s highest civilian award.

As international president of MSF, Orbinski represented the organization in numerous humanitarian emergencies and on critical humanitarian issues in - among others - the Sudan, Kosovo, Russia, Cambodia, South Africa, India and Thailand. He has also represented MSF at the UN Security Council, in many national parliaments, and to for example, the World Health Organization, and the United Nations High Commissioner for Refugees.

From 2001 to 2004, Orbinski co-chaired MSF' s Neglected Diseases Working Group, which created and launched the Drugs for Neglected Diseases Initiative(DNDi). The DNDi is a global not-for-profit research consortia focused on developing treatments for tropical diseases of the developing world that are largely neglected by profit driven research and development companies. Since its inception in 2003, the DNDi has engaged significant international advocacy for neglected tropical diseases (including for a Global Framework Convention on Research and Development). It has also developed and disseminated two antimalarial treatments, one new treatment against Sleeping Sickness, one new treatment against Visceral Leishmaniasis, a set of treatments for Visceral Leishmaniasis in Asia, and a pediatric dosage formulation for Chagas Disease. These new drugs are now available to millions of people. DNDi also has a development portfolio of 17 lead compounds targeting neglected diseases, including children’s formulations of Anti Retro-Virals for the treatment of HIV/AIDS.

In 2004, Orbinski became a research scientist at St. Michael's Hospital, and professor of both medicine and political science at the University of Toronto. The world’s leading medical journal The Lancet recognized one of his co-authored papers on HIV/AIDS treatment adherence, as among the 20 most significant medical research papers in the world for 2006. Another of his co-authored papers, appearing in The Lancet in 2002 and analyzing the lack of research for neglected diseases, is recognized as “one of the most important scholarly articles that shaped scholarship in the field of global health in the post Second World War years.”

Orbinski received his MD degree from McMaster University in 1990, and held a Medical Research Council of Canada fellowship to study pediatric HIV in Sub-Saharan Africa. He completed a master’s degree in international relations at the University of Toronto in 1998 before being elected international president of MSF.

In 2004, Orbinski co-founded Dignitas International, a hybrid academic non-governmental organization that is now a leading organization in the development of solutions for global health. It envisions a world in which health care is available to all, regardless of wealth, gender, or geography. By working in partnership with patients, health workers, researchers, and policymakers, Dignitas tackles the barriers to health care in resource-limited communities. It provides frontline medical care, strengthens health systems, and engages research that shapes health policy and practice at regional and international levels. Dignitas International is now supporting more than 200,000 people on full treatment for HIV, and in 2014 is scaling up its primary health-care treatment model to serve a population of three million in Malawi. Dignitas also has an extensive research capacity focused on improving health systems in the developing world.

Orbinski is a founding board member of the Global Alliance for TB Drug Development, the Stephen Lewis Foundation and Canadian Doctors for Medicare.  He is a founding member of the editorial boards of Open Medicine and Conflict and Health, two independent, peer-reviewed open access online medical journals that are committed to the best science and that see health in its larger political and human context. He also sits on the editorial board of Ars Medica, a journal that explores the interface between the arts and medicine, and examines what makes medicine an art.

Orbinski’s award-winning and internationally acclaimed documentary film on medical humanitarianism, titled Triage was screened at the 2008 Sundance Film Festival, and won the 2008 Amnesty International Gold Medal Award. It was released in theatres across Canada in the fall of 2008, and was televised in Canada and the US in 2009. In 2011 Triage was incorporated into the War and Medicine exhibit at the Canadian War Museum (exhibition sponsored by Wellcome Trust), and is part of this exhibition that travels internationally.

His best-selling book, An Imperfect Offering: Humanitarianism in the 21st Century, was released internationally in 2008 and has been translated into five languages. It won the 2009 Writer’s Trust Shaunessy-Cohen Prize for best political writing in Canada. It was one of five nominated for the 2008 Canadian Governor General’s Literary Award in non-fiction, and was one of National Public Radio’s 2008 Top Five Political and Current Affairs Books in the United States.

As of 2010, Dr. Orbinski is a member of the Order of Ontario, and an Officer of the Order of Canada, designations that recognize his achievements and ongoing commitment to excellence in humanitarianism and global health.  He is the 2011 recipient of the Walter S. Tarnopolsky Human Rights Award (given by the Canadian Superior Court Judges Association, the International Commission of Jurists {Canada}, the Canadian  Bar Association, and the Canadian Association of Law Teachers), recognizing his outstanding contributions to domestic and international human rights. He is also recipient of the 2012 Queen Elizabeth II Diamond Jubilee Medal, and the 2012 Award for Excellence, given by the Canadian Civil Liberties Association, Canada.

Orbinski is currently developing a global health research agenda around the health impacts of global warming. He lives in Guelph, Ontario with his wife and their three children.