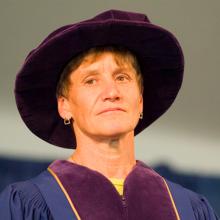 Dr. Elizabeth Ashton holds a PhD in Education Administration from the University of Texas at Austin and has been president of Victoria’s Camosun College since 1994. For decades she has played a vital role in post-secondary education in Canada and British Columbia.

Before taking up a successful career in education, Dr. Ashton was a member of the Canadian Equestrian team between 1969 and 1986, winning a Silver Medal at the Pan American Games in 1975, captaining the Gold Medal win for the Canadian Eventing team at the World Championships in 1978, and participating in three Olympic teams.

Dr. Ashton chairs the British Columbia College Presidents, a consortium that provides a voice for the B.C. College and Institute System. She is also a member of the province’s Degree Quality Assessment Board and was on the Provincial Standing Committee which helped guide the strategic direction for the college, university-college, institutes and agency system in the province.

As president of Victoria’s Camosun College since 1994 Liz Ashton has played a vital role in post-secondary education in British Columbia and Canada.

As a Canadian equestrian athlete and former Olympian, Dr. Ashton has represented Canada around the world as Canadian team captain for a Gold Medal win at the World Championships in 1978 and as part of three Canadian Olympic teams.

This kind of leadership has served her well as she steered Camosun College to become a pillar among the province’s post-secondary educational institutions. This is also why Royal Roads University is motivated to celebrate the contributions she makes not only to lifelong learning, but also to the community she has championed and served in Victoria. In fact, it is values such as leadership and community involvement that are central to what Royal Roads University seeks to foster. Dr. Ashton epitomizes why they are so important for the advancement of society.

This honorary degree from Royal Roads University will join Dr. Ashton’s numerous distinctions, including a commemorative medal for the 125th Anniversary of the Confederation of Canada given to her in 1992 for a significant contribution to her fellow citizens, her community and to Canada. In 1997 she was made a distinguished graduate by the College of Education at the University of Texas at Austin, where she earned her PhD in Education Administration. Dr. Ashton received a second commemorative medal given for Her Majesty Queen Elizabeth’s Golden Jubilee in 2003.

The Royal Roads University Board of Governors recognizes Dr. Ashton’s achievements as an educational leader, a promoter of the city of Victoria and an outstanding sportswoman and role model for Canadians. Under her guidance Camosun College has become an important and valued collaborator with Royal Roads University in providing options for learners to achieve their education goals.

In recognition of a lifetime of achievement and her consistent community leadership, Mr. Chancellor, I am pleased to present Dr. Elizabeth Ashton for the degree, Doctorate of Laws, honoris causa.