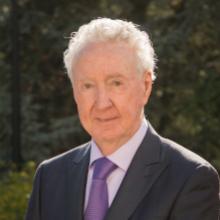 Dr. David Flaherty is not only a specialist in the management of privacy and information policy, but also a committed supporter of the arts, a philanthropist and a dedicated volunteer.

He served a six-year term as the first information and privacy commissioner for the Province of British Columbia from 1993 to 1999, pioneered developments in privacy compliance auditing and built a privacy office with an enviable record for successful mediation of access to information disputes.

Flaherty has continuously developed innovative methods to enhance the protection of privacy for citizens of B.C. and beyond.

Flaherty has been a member of both the External Advisory Committee to the Privacy Commissioner of Canada from 2004 until 2014 and a member of the advisory board for the B.C. Office of the Information and Privacy Commissioner since January 2011. Since 2000, he has been the chief privacy advisor to the Canadian Institute for Health Information and a Director of MAXIMUS BC Health Inc. since 2005.

In his dedication to the growth of a vibrant arts community, he emphasizes the importance of developing and nurturing local talent. Under his leadership as president, Pacific Opera Victoria established the Baumann Centre for Pacific Opera in downtown Victoria, a creative home for a broad spectrum of arts initiatives in the capital. He received the Generosity of Spirit Award from the Association of Fundraising Professionals of Vancouver Island in 2012.