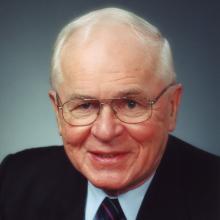 Douglas Roche is a distinguished author, parliamentarian and diplomat. People in Canada and around the world recognize him as a passionate and powerful advocate for social justice, global peace and peace education. He is particularly noted for his expertise and longstanding commitment to achieving nuclear disarmament. Royal Roads – in keeping with its own founding themes of inspirational leadership and conflict resolution – takes great pleasure in honouring Senator Douglas Roche for his tireless pursuit of peace and justice for all people.

Senator Roche was born in Montreal in 1929. After graduating from St. Patrick’s College in Ottawa in 1951, he became a reporter and editor for many newspapers, including founding editor of the Western Catholic Reporter in Edmonton from 1965-72.

Senator Roche was elected as Member of Parliament four times, serving from 1972 until 1984 in the House of Commons, where he championed and gained attention for his work on development and disarmament. He was appointed Canada’s first Ambassador for Disarmament from 1984 to 1989. During this time he was elected chairman of the United Nations Disarmament Committee, the main UN body dealing with political and security issues, at the 43rd General Assembly. In 1989 he was appointed Visiting Professor at the University of Alberta, where he teaches “War or Peace in the 21st Century?”

He is chairman of the Canadian Pugwash Group, an organization dedicated to peace and security issues, and of the Middle Powers Initiative, a network of eight international non-governmental nuclear disarmament organizations. Senator Roche has written 15 books and contributed chapters to eight more. His books include Bread Not Bombs: A Political Agenda for Social Justice (1999) and The Ultimate Evil: The Fight to Ban Nuclear Weapons (1997).

He has received many honours and awards for his humanitarian work. In 1985 he became the first Canadian to be elected honorary president of the World Federation of United Nations Associations. In 1992 he was named Officer of the Order of Canada and, the same year, was also awarded the Thakore Foundation Award in honour of his disarmament and peace work.

In 1995, His Holiness Pope John Paul II gave him the Papal Medal for his service as special adviser on disarmament and security matters. In 1998 the Pope named him Knight Commander of the Order of St. Gregory the Great.

In 1997, Senator Roche received the Mahatma Gandhi Canadian Foundation for World Peace Award in appreciation of his commitment to the building of a non-violent world. He has also received four previous honorary doctorates.

In 1998 he was appointed to the Senate. Senator Roche lives with his wife in Edmonton.