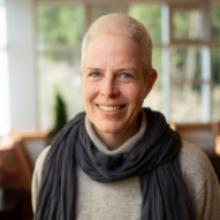 Cynthia Lapp heads research and outreach with Starry Skies Lake Superior, a non-profit organization dedicated to the reduction of light pollution in the Lake Superior region. Lapp leverages the power of participatory engagement to change individual behavior and infrastructure decision-making to reduce the human impact of artificial light on human health, ecological functions and cultural values in connecting with the night sky. She works with non-profits and stakeholders from municipal to federal levels in Canada and the US to help establish dark-sky certified public lands. Trained in Technology of Participation facilitation methods, she engages community stakeholders in the protection of these areas through the regional reduction of light pollution. As a landscape architect, Lapp focuses on landscape ecology. Her research interests include how light effects the human body, the environmental effects of artificial light, and social justice issues around light pollution. Lapp holds a Bachelor of Arts in Human Ecology from World College West (1992), a Bachelor of Fine Arts from the University of Minnesota (2001) and a Master of Landscape Architecture from the University of Minnesota (2009).